I could tell that Mr. Inoue and I together shared a mutual passion for amateur radio. I was, and am still very impressed with Mr. Inoue’s passion to continually improving and advancing the technology of amateur radio, still keeping it affordable for all hams to enjoy. An example of common friendship of ham radio was when we traveled to Hawaii and we could meet with local hams on a friendly person to person basis. Mr. Inoue has always promoted good friendship through amateur radio. 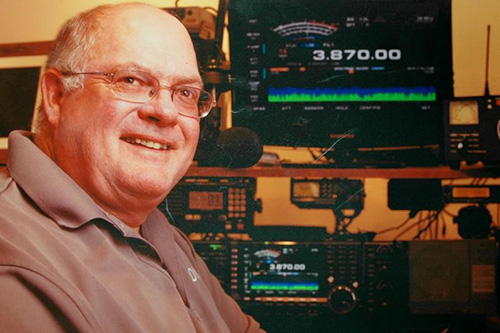 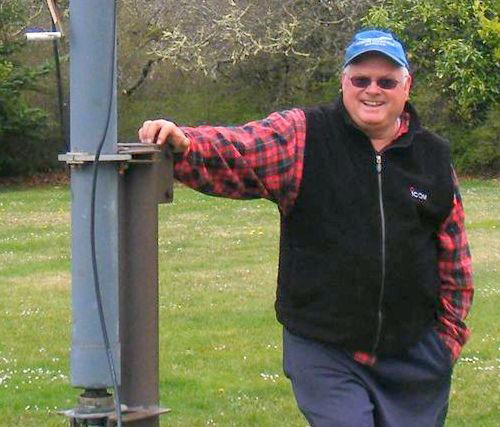 K7NHE, Bob at base of his 16-meter-tall tower

I first became a licensed ham at the age of 13 in 1960. My grandfather was a professional telegraph operator for the railroad in Montana. I learned Morse code from him at the age of 8 while listening to him send code while working at the railroad. I have always had a fascination for the concept of communication. I became an Extra class licensed operator in 2014, as well as passing all of the available Commercial class FCC examinations.

My wife Carol and I currently live on San Juan island of the coast of Washington State. Very convenient to work JA land! My favorite mode is SSB or D-STAR. I still like to operate AM with an old tube model radio I had rebuilt when I was in high school. I especially like to operate from remote and difficult to get to locations with temporary antennas.

Now, I’d like to introduce you about “Island Chasing,” which is one of the most popular activities among the US hams.

What kind of images would come to your mind when you think of “the US amateur radio stations?” Probably a high-power operation using huge antenna towers in a vast site? Well, that is not necessarily true. The latest popular trend in the US ham radio world, involves operating from remote locations rather than the home QTH. This includes operating from mountain summits, US parks such as Yosemite and the Grand Canyon, various lighthouses and remote islands located in the United States.

The United States Islands Awards Program (USI) was set up to cover islands within the fifty (50) states of the United States. These islands are located in lakes, rivers, and along the coastal shore lines. Fresh water or salt water. The USI was formed in 1994 to further enhance “island chasing” that has become so popular on the amateur radio bands. The goal of the USI program is to promote a simple but effective system of “island chasing” and activating in a professional radio-manner, operating totally on the “honor system.” The USI warmly welcomes all ham radio operators, shortwave listeners (SWL), and island enthusiasts to yet another chance to “island chasing.” The USI is open to anyone interested in working toward the many and varied US Island Awards by collecting and activating US islands.

Our local ham club called the San Juan County Amateur Radio Society (SJCARS) is located on several of more than 100 islands off the coast of Washington state. This spring SJCARS decided to activate 5 new islands that had never been on the air. The islands must be a minimum of 35 m x 35 m in size. To “qualify the island,” the operators must operate for two hours and make 20 new contacts with other hams, regardless of the country. (JA’s invited.)

Last May were successful in qualifying five “new” islands. These small, remote islands are accessible only by private boat. This requires a special effort working with ocean tides and currents, in order to land a small boat, set up the necessary equipment and antennas, and get on the air. The newly qualified islands including their official identification are:
Stuart        WA208
Satellite     WA210
Johns         WA209
Cemetery   WA211
Gossip       WA212 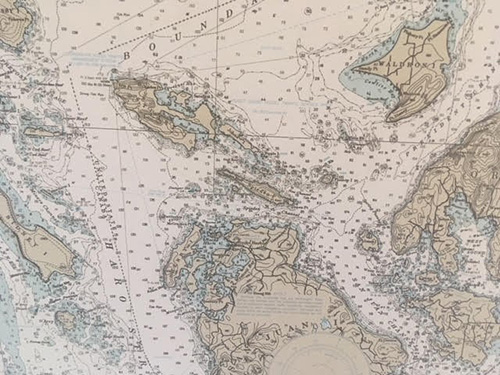 Area map of the 5 new islands

We used a Gap 20 m vertical antenna driven into the island sand and rock with a large hammer...a system consisting of an ICOM’s IC-7300 was grounded to a copper strap approximately 25 m long and 8 cm wide to the other end of which was then dropped into the ocean. 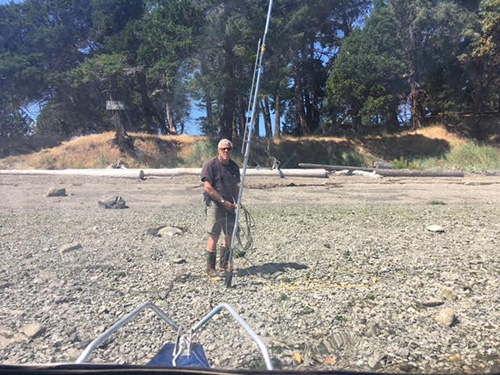 The transceiver/operator remained in a small metal boat which qualified as long as the boat stayed on the beach on the island’s shore. It took Clark K7LRK and myself, Bob K7NHE for two long days to qualify the five new islands! 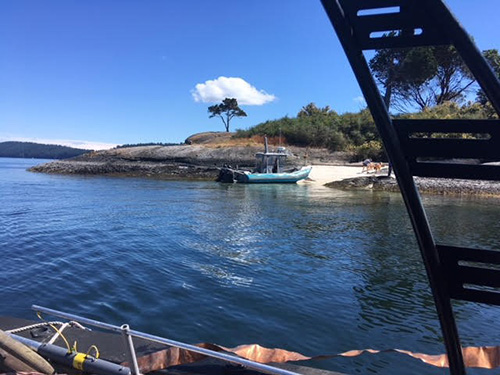 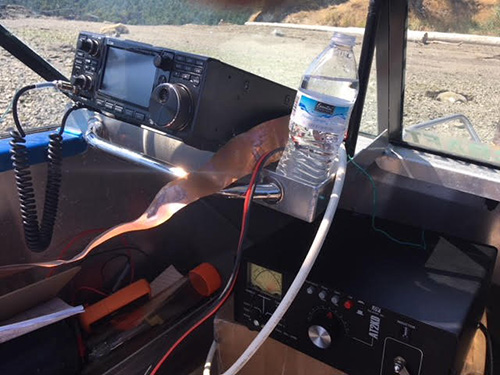 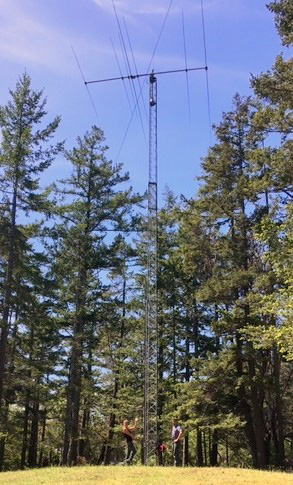 The most challenging part of “island chasing” is to carefully watch the tides and currents when landing the boat on the beach. We have land on an incoming tide, set up our station and ground and antenna, make the required 20 contacts before the tide starts to go out......otherwise, we and the boat would be stuck high and dry on the beech for 12 hours for the next incoming tide. I enjoy that it is a chance to do local island chasing and is not so expensive as some “DX peditions.” Also, very friendly.

We invited other hams in our club to join in during the annual US Islands operating weekend in August. Many, many contacts including SSB & CW were made on the air from several of the new islands. Two new hams who had never operated in a contest before enjoy their first HF contesting experience. XYL Peggy, KI7PJS got her first HF Contest experience in a remote and challenging location. Scott W7SLM and Dan N6AU also joined on the air. All hams worldwide (including JA’s) are invited to join the annual US Islands on the air competition in August each year. 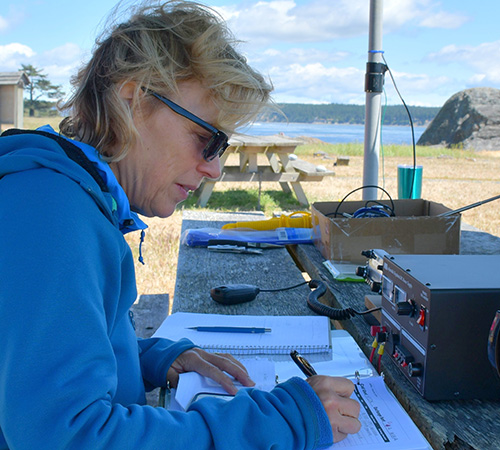 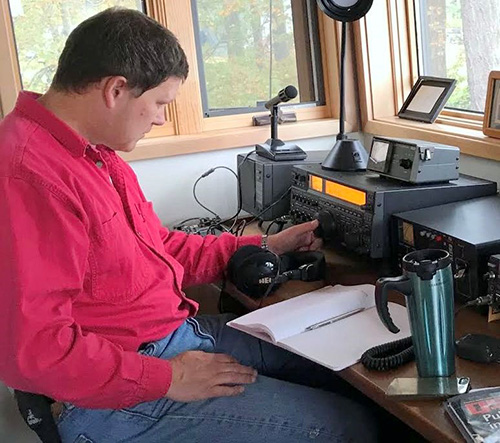 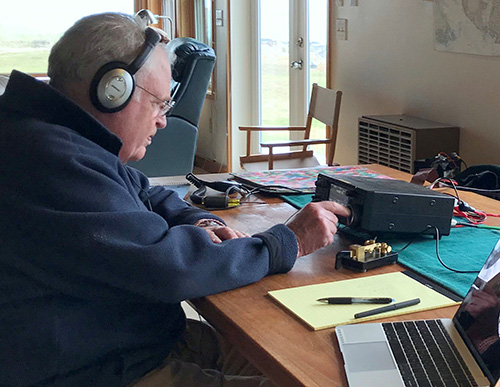 Details are included in the following URL.
http://usislands.org

We invite all Ham’s to join us on the air next August when we will be operating in these rare remote U.S. island locations off the coast of Washington State using call sign K7LRK and K7NHE on 20 meters SSB. We QSL all island contacts and hope you will join us for this chance to work these remote islands in the United States this coming August. 73!