Ham of the Month 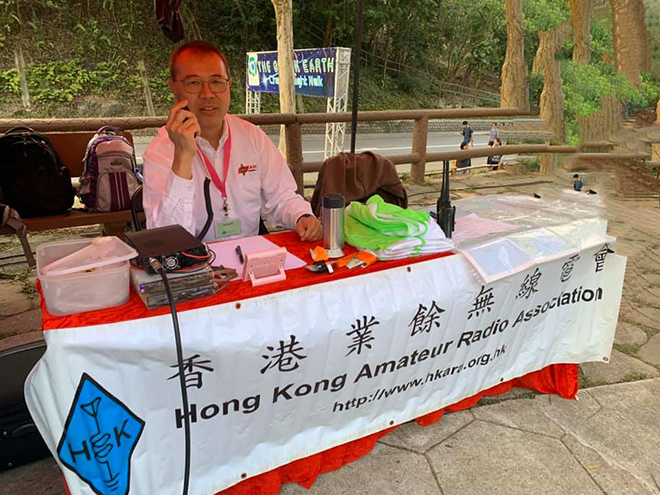 Johnny VR2XMC who lives in Hong Kong first became interested in amateur radio when he was twelve years old. At that time, he often spent time with his older cousin. One day his cousin brought him a walkie-talkie and said “We can remotely have a chat with this cool device!” That completely changed his life.

Then he became a junior high school student. He was still playing with his walkie-talkie, but one day his teacher told him that if he got an amateur radio operator license, he could enjoy talking with more and more people, even with people living abroad. He got excited and decided to be an amateur radio operator. However, Hong Kong was still a British Colony then and the radio amateur examination was in English only. Consequently, Johnny had to give up taking the examination because even if children in Hong Kong started learning English in the first grade of a primary school, the English proficiency of a junior high school student was not good enough to understand the radio amateur examination questions.

At the age of eighteen, he passed the English radio amateur examination and would like to apply for a ham license. He was very excited to be on the air, but another obstacle appeared in his way. According to the British law, you have to be at least 21 years old to operate amateur radio, so even if he was legally licensed, he was not allowed to actually operate. After three years of patience, he finally obtained VS6XMC. You might have already known that the prefix of Hong Kong was first “VS6” but it changed to “VR2” after the transfer of the sovereignty of Hong Kong in 1997. Now the law has changed and they can be an amateur radio operator at any age. His son, VR2XMB, got his license at the age of 16. 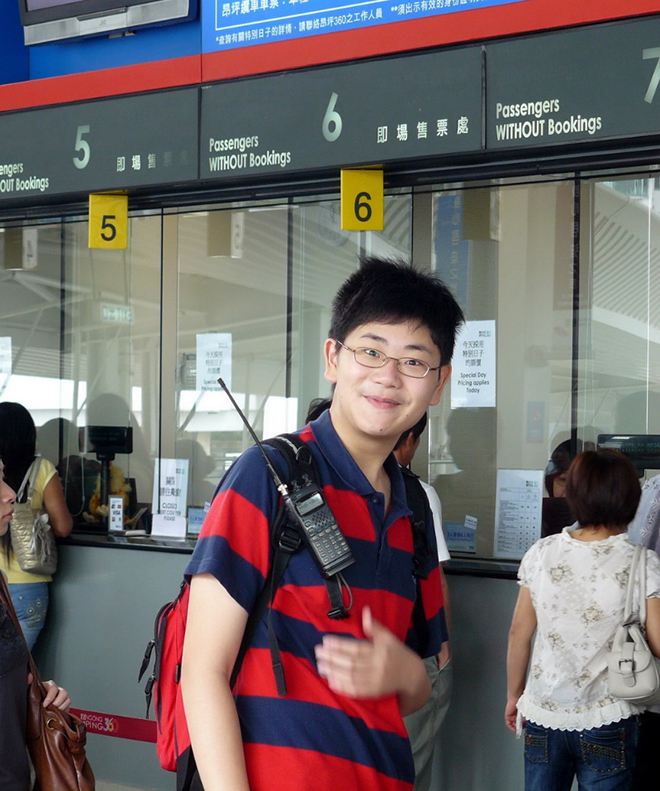 Johnny’s son VR2XMB got his license at 16.

His first rig was the Icom IC-2AT, which was about 1,500 HKD at that time. He was an university student and doing a part time job, and 1,500 HKD was really expensive for him. “I never regret buying the IC-2AT. It’s an about 40 years old radio, but I still can use it while it is being fixed. I love Icom radios because of their high quality and reliability,” he said.

Now he does not proactively operate radios because his dearest mother is now 88 years old and needs nursing care so he is helping her every day. He used to be on the air in the SSB mode with the IC-7610. He liked talking with his friends around the world as well as competing in contests. Now he lives on the 46th floor of a high-rise apartment so he puts his mobile antennas for the 21 and 28 MHz out of the window. The antenna height is about 150 meters (492 feet) above the ground so even with mobile antennas, his signals can reach quite far. They are his favorite bands lately. In the past, he was also dedicated to DX operation and 100 entities confirmed so far. He liked to have QSOs with East Coast stations. Although it was very difficult to reach from Hong Kong, that is the best part of amateur radio, he said. 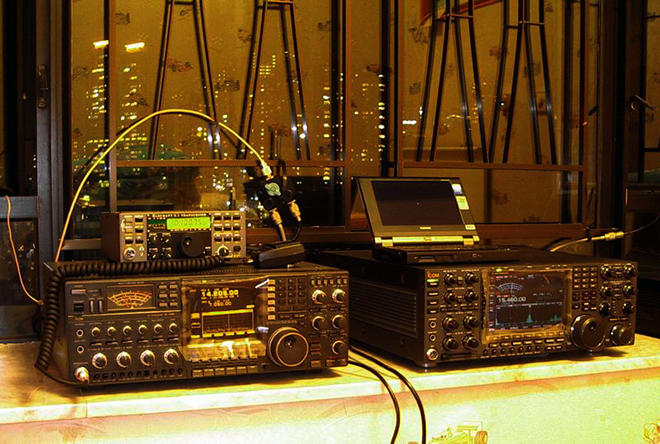 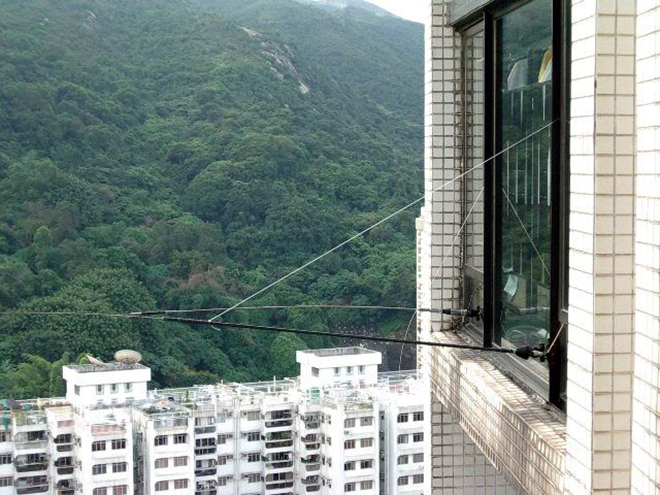 He puts two mobile antennas for the 21 and 28 MHz out of the window.

He also operates amateur radios in charity events conducted by Hong Kong Amateur Radio Transmitting Society (HARTS), utilizing the call sign “VR2HK.” HARTS is a non-profit organization that encourages amateur radio activities to the Hong Kong society, and Johnny used to be HARTS’ representative in IARU Region 3. He attended the IARU Region 3 conference in 2012 and 2015. He thinks amateur radio is a great hobby for both education and emergency and very happy to help their charity activities. 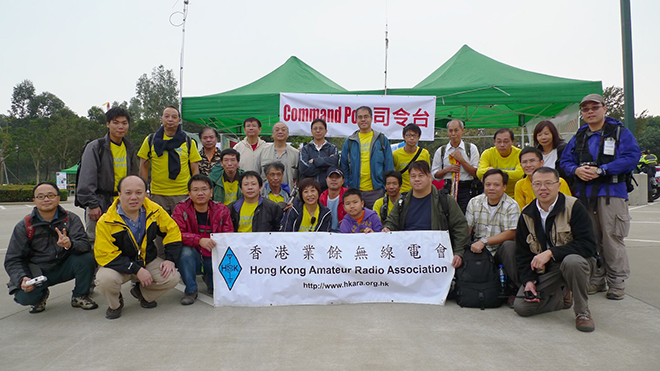 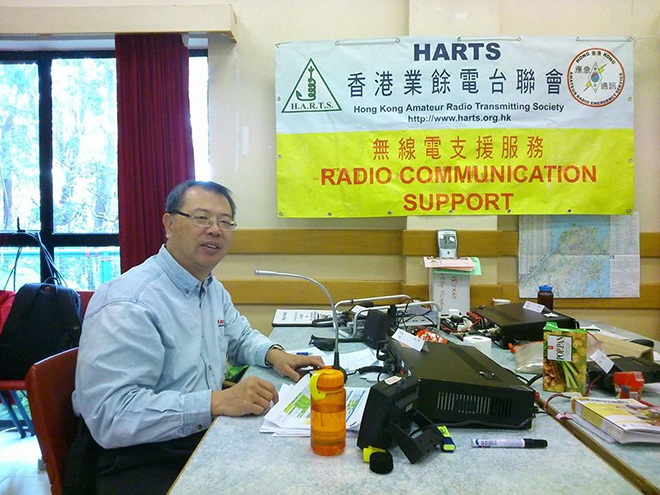 One of the most impressive QSOs in his ham life was occurred by chance in 2000. In the year of 2000 was a time of solar activity maximum, so the propagation conditions were great. One day afternoon, he was in the bathroom holding a handheld radio with a telescoping antenna. He was just listening to the 50 MHz band and very relaxed. Suddenly, he happened to receive a signal from a station in Saudi Arabia! With just a handheld and a telescoping antenna...he couldn’t believe that at first. He was so excited to call the station and the QSO was successful. Another one was occurred in the same year while he and his ham colleagues were operating field day working 144 MHz SSB on a hilltop. He was very surprised that the team was able to have a QSO with a JA station, which might happen only once in one’s life.

He usually reads the QST magazine to gather amateur radio information. Since Chinese and Japanese both use Chinese characters, he used to order the Japanese CQ magazine and read it by grasping the general meaning from Chinese characters. He has many ham friends in Japan and enjoys exchanging information. He usually attends Tokyo Ham Fair or Asia Pacific DX Convention (APDXC) but due to the COVID-19 situation, unfortunately his next visiting Japan has not been decided yet.

Lastly, he told us about his future goals. He will be 60 years old next year and retiring from his real estate profession. His second job is a part time professor at university, telling students about real estate business and appraisal. “Even after I retire, I want to keep interacting with young people or doing volunteer activities. Of course, I want to be on the air as well, more than ever! I really hope the situation will get better soon. I can’t wait for the day when we feel safe and see my ham friends around the world.”