After I talked with the president, I got a chance to observe how they manufacture and adjust their antennas. Before that, I also talked with Mr. Ushimaru, the manager of the engineering department, about the flowing procedure of a new product development. 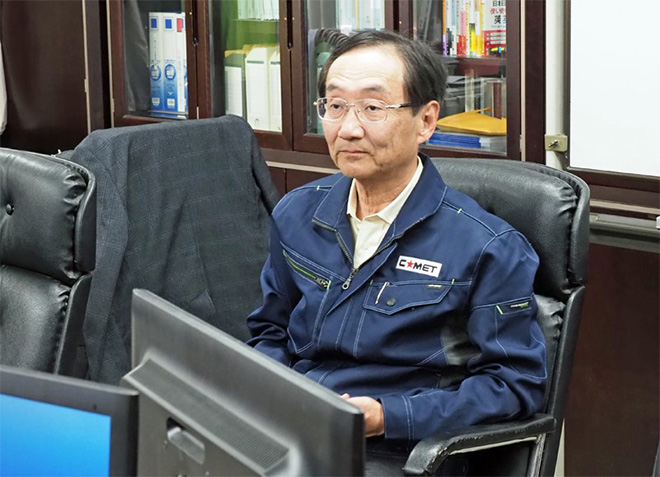 Mr. Ushimaru, is the manager of the engineering department, and also a ham with 40 years of experience.

To create a new antenna, the first thing they do is researching their market. According to the demand, they develop a concept of the antenna, and decide the performance. Then they make a prototype to check if the performance can be obtained. At last, they redesign it for mass production, and then finally they start manufacturing. It takes at least a year and a half from the concept planning to shipping. They think the most important thing in developing a new product is...thinking from the customer’s perspective! Therefore, they always proactively gather information at their booth of amateur radio events, or at ham stores, to listen to their customers’ real opinions. Some products were even redesigned after their initial release, based on customer feedback! 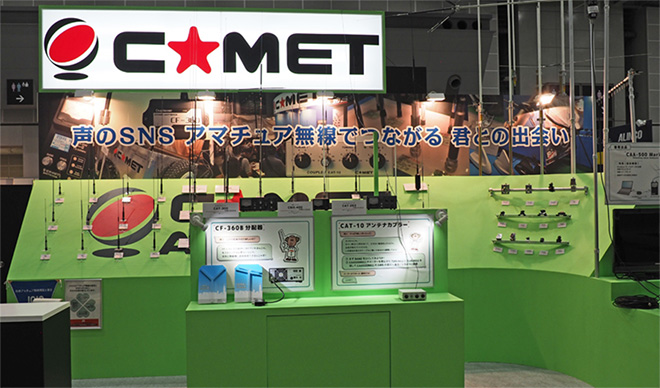 “I usually find a prototype exhibited at your booth...Is it also for market research?” I asked.

“You are right. In fact, each engineer develops their prototypes...sometimes secretly without receiving their boss’s approval! This is one of our company’s great things. We encourage anyone to speak out and express their thoughts and ideas.”

Isn’t it great for every employee to have a chance to present their prototypes? That would be really exciting if you are an engineer! 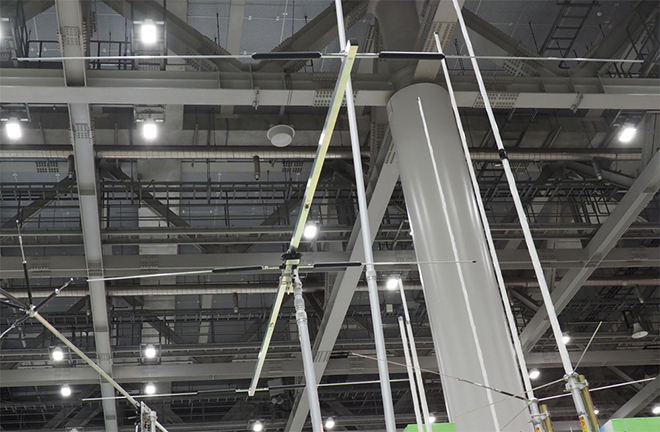 This is an example of a prototype according to an employee’s new idea, “Shortened 3-element Yagi antenna for 50 MHz.” The element length is shortened by 62% of its full wavelength. It must be suitable for field operation!

Now, let’s take a look at manufacturing. First, they showed me how an export version mobile whip antenna (CA-2×4SR) was assembled. A well-experienced engineer put strong glue on an antenna feed part and coil to attach a cover. 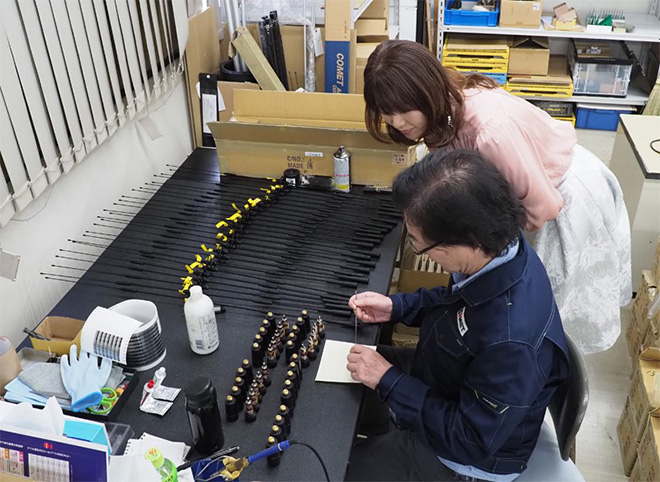 A well-experienced engineer assembling an antenna 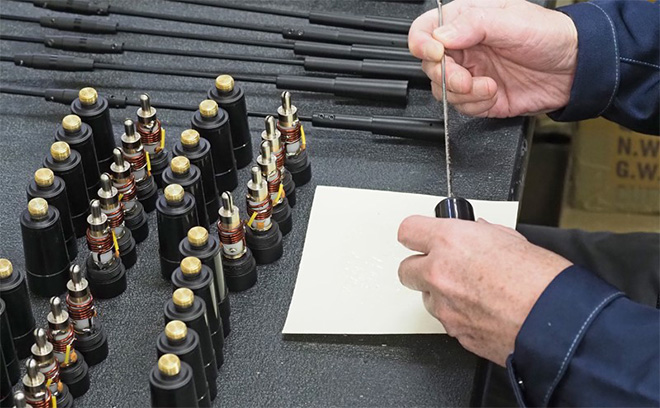 Using strong glue to attach a cover. Because this step cannot be done again, both speed and carefulness are very important. 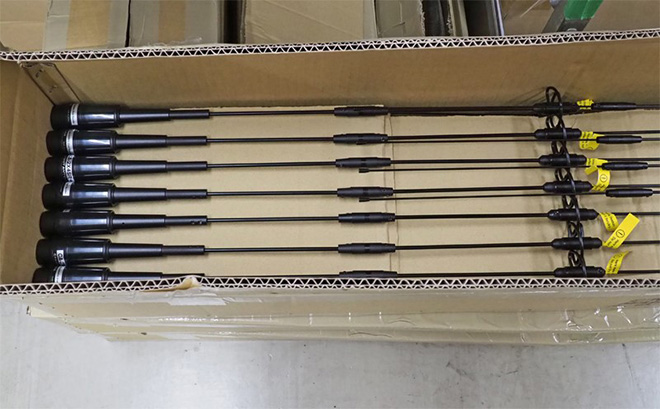 Now assembling completed! After this procedure, they do inspection and packing. Sometimes they assemble hundreds of antennas in just one day! 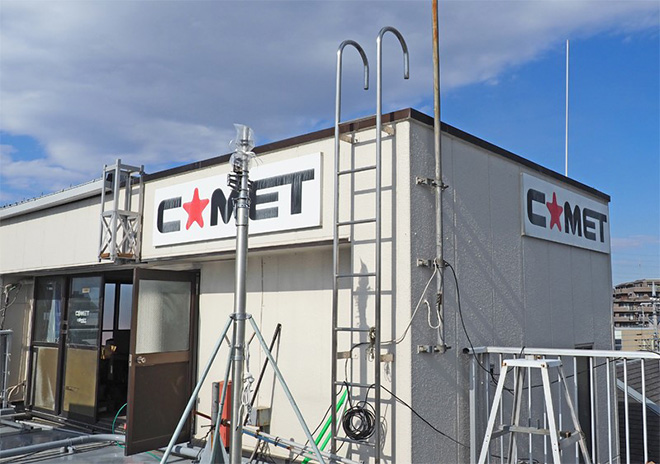 On the rooftop, they conduct experiments and adjust antennas.

When I reached the rooftop, they were actually carrying out an experiment for export version ground plane antennas. They were connecting each antenna to an analyzer, checking the resonate frequency, and then adjusting the place of the coil tap. Since Japan has both extremely hot summers and harsh winters, the antenna must work well, and be really tough, when mounted on a rooftop. Adjusting antennas requires skill and energy. 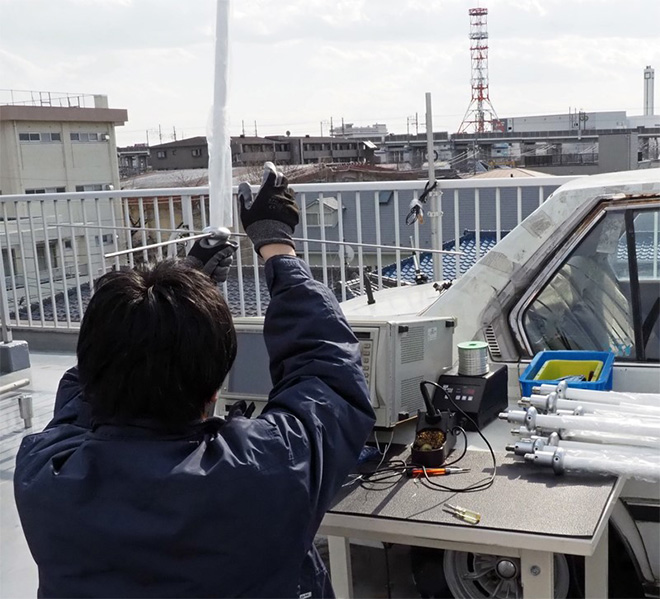 Adjusting an export version ground plane antenna. They attach an element one by one and hold it in a vertical direction to measure the resonate frequency. 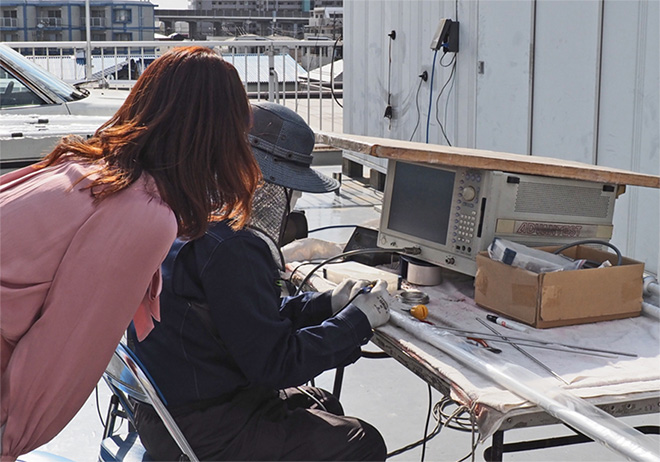 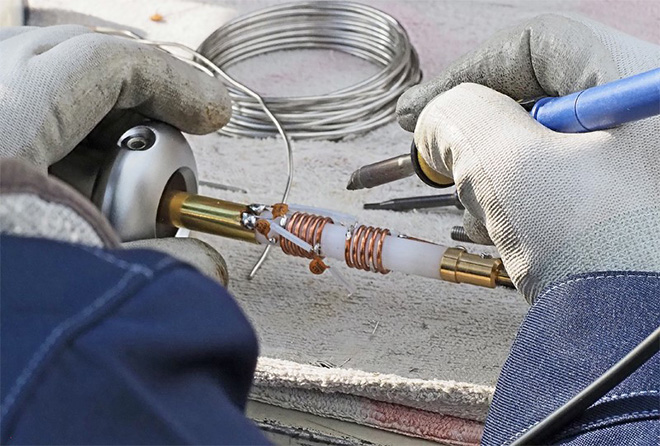 Based on the measurement result, adjusting the place of the coil tap by soldering to obtain the best SWR with the transmit frequency according to its specification. 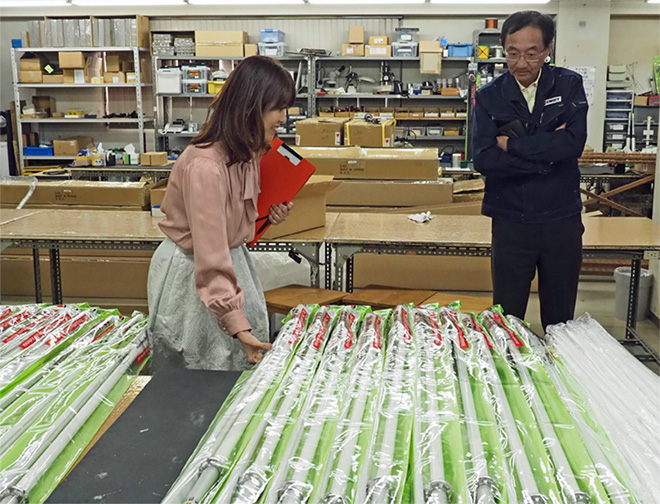 Packing is done! They are waiting to be shipped.

Lastly, I was shown a D-STAR repeater JP1YLQ/434.06 MHz, installed in the building. 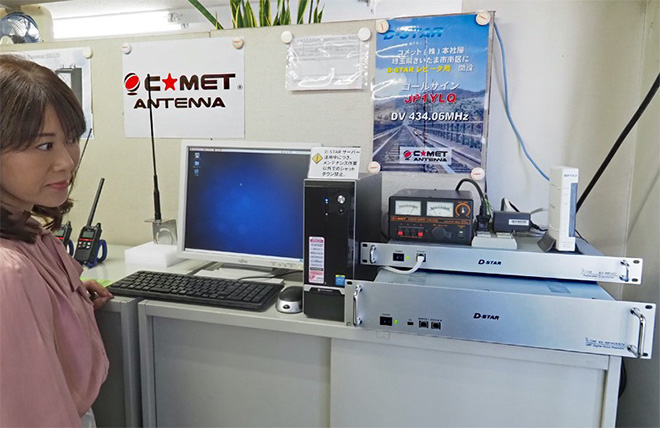 This is the D-STAR repeater JP1YLQ!

I talked with an administrator of the JP1YLQ repeater.

“When did you establish this repeater?” I asked.

“In March 2017, JP1YLQ became the fourth D-STAR repeater in Saitama prefecture. The first repeater was installed in Irima city, June, 2011. The next one was installed at the top of Mt. Dodaira, whose altitude is 850 m (929 yd) in Tokigawa-cho, June, 2012, covering about half of area of the Kanto Plain. The third one was for local stations in Saitama, built in Kawagoe city, March 2013. In Saitama, we have a large ham population and there are many stations who are operating D-STAR. To make our ham lives more convenient, we decided to install the JP1YL repeater in the prefectural capital, Saitama city.”

“OK, but why was it installed in your company?” 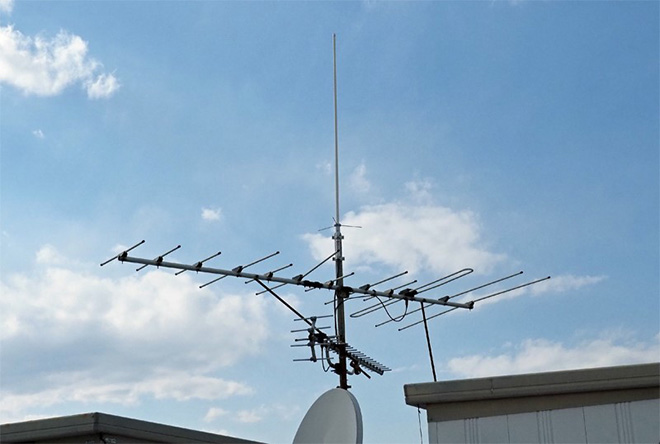 This is the GP antenna for JP1YLQ installed on the rooftop. Of course, it’s a COMET antenna.

“Did you have any troubles in installing the repeater?”

“Yes we did. Installing this repeater was the first experience for us, so we went through many trials and errors. In case of a repeater station, first we have to make a group of administrators. Then we have to closely investigate the service area, avoiding interference with other stations. In the actual investigation, a member transmitted at the installed place, and others drove cars around and received to figure out how far the signals could reach. We made a service area map by plotting the results...it was hard work. After that we submitted a repeater opening petition to Japan Amateur Radio League (JARL). Because a repeater station needs to be examined in detail, it took a long time to be confirmed. We applied in June 2016, and then got an approval in October 2016. The repeater finally licensed in the next year, February 2017 and started service in March 2017.”

“Wow great! How far does the repeater cover?”

“We have stable connection within approximately a 10 km radius. For example, at a place 10 km away, I tried to access the repeater from a footbridge with a handheld and it was successful. A station with an antenna installed in a house was able to reach the repeater about 20 km far from the repeater!”

I found that the JP1YLQ repeater is convenient and necessary for many local people. I’m going to try to access JP1YLQ using a gateway call from my nearest repeater! I’m looking forward to seeing COMET people on the air! 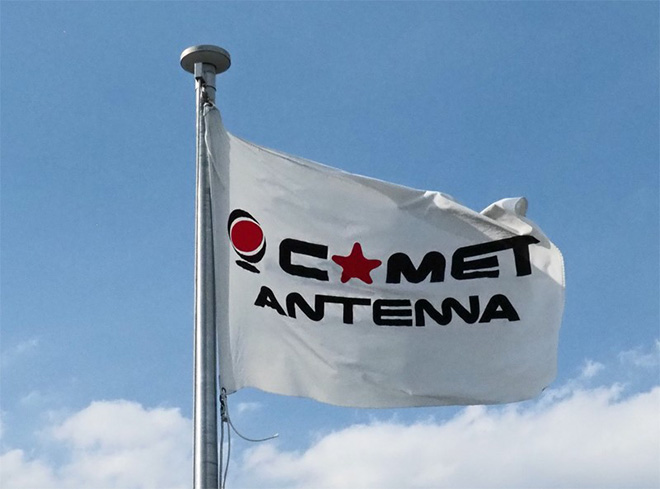 A company flag on the rooftop

I sincerely appreciate President Mr. Ikegami, JP1YLQ administrators, and all other staff members who worked with me during this interview. After I observed manufacturing and adjusting antennas, I became interested in them more and more! I will keep cherishing my COMET antenna!