Recently we have heard that the high-speed and high-resolution real time spectrum scope and the Dual Watch function using two independent, identical receivers are topics in rag chews in amateur radio.

However, we found a transceiver that is equipped with another super feature that should be noted for clean transmit signals, high-quality receiver audio, and outstanding RMDR characteristics. These are common features in the flagship IC-7851 transceiver, as well as the entry model IC-7300.

We think that some hams already experienced hearing real QSO audio at the Dayton Hamvention, or Tokyo Ham Show this year, and they realized that the audio is good. The staff of the monthly web magazine, FB NEWS will try to show the real specifications, with tests and observations in four articles.

The 1st article is Transmit Signals: A clean sky by having clean signals.
The 2nd article is Receiver audio: Talking about receive audio.
The 3rd article is RMDR: Increasing the chance of a QSO with rare entity stations.
The 4th article is a special topic: A thorough inspection of Overflow (OVF).

1.  A clean sky by having clean signals.
The Direct Sampling method was implemented in the receive system of the IC-7610, the same as that in the IC-7300. The input signals from the antenna are processed by an A/D converter and an FPGA (Field-programmable Gate Array.)

We decided to observe how clean the transmit signal of the IC-7610 and IC-7300 is compared with other manufacturers’ transceivers, through a real test.

The transceiver’s transmit signal in Fig. 1 does not have zero noise components, but the noise components are very small and they are more than -100 dB to the carrier level. Most spectrum analyzers do not have a dynamic range of more than 100 dB. That is a limit, as -100 dB is very small, as in 1/10,000,000,000 … a very small level.

The transmit phase noise characteristics shown below were measured with a Signal Source Analyzer (SSA). You probably have seen one in manufacturer’s presentations or their specification sheets. 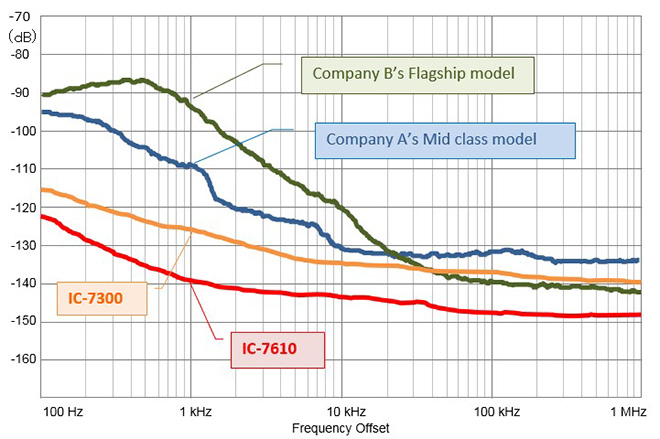 We found big differences between the IC-7610/IC-7300 and other manufacturer’s models, in the quality of their transmit signals, as shown above. However, it was hard to understand the differences for us with only the measurement data and graph, so we did a comparison test with the following configuration.

We set an IC-7610 as a receiver, and set the screen as shown below to observe the received signals. Then, we keyed down a transmitter, and observed its carrier signals on the receiver oscilloscope.

FB NEWS staff’s commentary: We observed that the transmit signal spectrum is spread to approximately +/- 0.5 kHz from the center frequency of 14000.5 kHz. The oscilloscope shows noise, and the level reached the second scale. The signal sounded harsh through the speaker.

FB NEWS staff’s commentary: We observed that the transmit signal spectrum is spread +/-1.5 kHz or more from the center frequency of 14000.5 kHz. This may cause interference to stations that operate on adjacent frequencies. The oscilloscope shows noise, and the level reached the second scale. The signal sounded harsh through the speaker, the same as company A’s model.

FB NEWS staff’s commentary: We observed that no transmit signal spectrum is spread from the center frequency of 14000.5 kHz. The oscilloscope shows no noise. The speaker sound is quiet. As there was a great difference in the results, to the extent we had our doubts, so we confirmed the measuring method and configuration.

FB NEWS staff’s commentary: The IC-7300’s results, such as the spectrum spread, noise level, and phase noise from the speaker, were close to the ones for the IC-7610. The price of the IC-7300 is approximately one fourth of Company A’s and B’s models. We were very impressed with the transmit signal quality.

We use radio waves in our daily life, for our cellphones, or especially amateur radio as our hobby. The radio waves are limited resources, and are public. A frequency may be a so-called public place. So, it can also be said that sending radio signals over a band spread, and occupying a limited frequency more than necessary, causes problems for others.

The IC-7610 sales began recently in Japan. Now Icom’s HF product line has the IC-7300 as its entry model, through the IC-7851 for the flagship. Then, amateur radio operators can transmit clean signals using the transceivers.

As we also tested transceivers to observe CW transmit signals. Be sure to look at the results in the last screen shots. We found that there is almost no noise transmitted from the IC-7610 and the IC-7300. The test conditions are the same as the ones for Fig. 4 above.

How were these videos? We think a lot of people are also astonished that there is a big difference in the quality of these transmit signals. When choosing a transceiver the next time, the transmit signal quality should also be one of the important specifications that you look for.