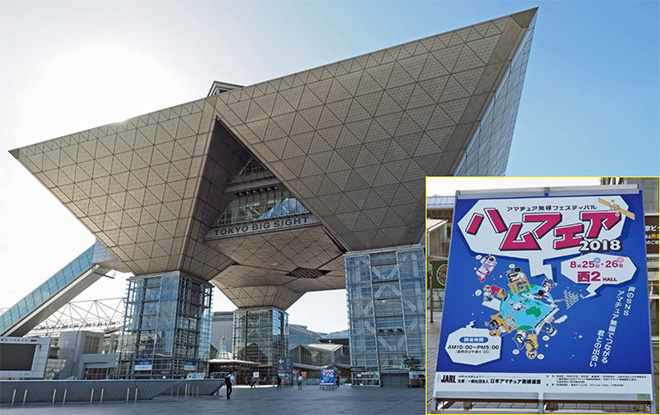 This building is the symbol of the Tokyo Big Sight. 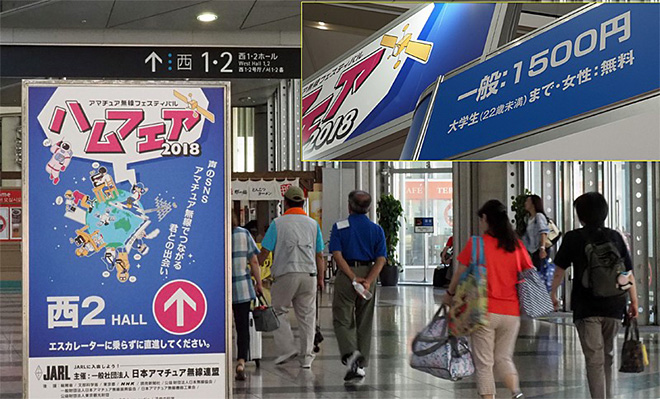 The Influence of a typhoon approaching the Japan Islands was a concern before the Ham Fair, but fortunately the typhoon passed, and a safe event was held. However, it was so hot during the two days, as the temperature reached over 35 degree centigrade (95 Fahrenheit). A lot of enthusiastic hams came, and people who wanted to participate made a long queue in front of the entrance gate. 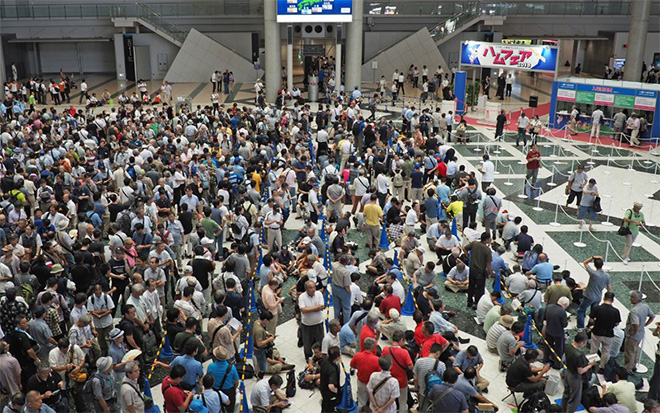 The front of the hall was congested with many visitors waiting for the doors to open. (At 9:30 AM on August 25th.）

The opening ceremony started at 9:45, and Mr. Yoshinori Takao (JG1KTC), the president of JARL (Japan Amateur Radio League), made a congratulatory speech. Other special guests from Japan and many foreign countries were also introduced. Then at 10:00, Ham Fair 2018 opened with a tape cutting ceremony. 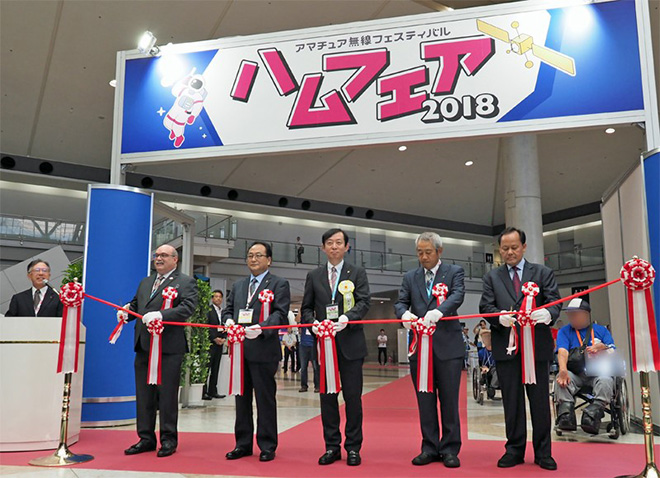 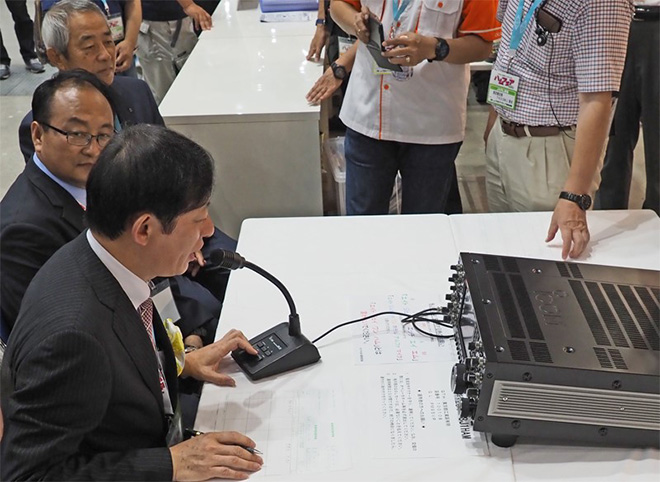 The first words of a QSO were transmitted by the president of JARL at the special event station, 8J1HAM.

Visitors moved into the event hall or the flea market after the tape cut opening ceremony. They had high expectations for the show, and were anxious to get going to see the exhibits and purchase a few items. 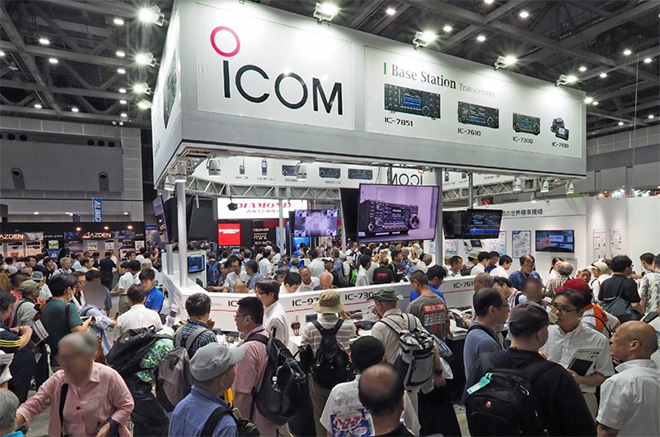 The Icom booth had many visitors.

The IC-9700, RS-BA1 Ver.2, RS-R30, AI Communications Box, and variety of Icom current models were displayed at the Icom booth

This year, Icom again enthusiastically exhibited products which respond to the expectations of amateur radio operators. The IC-9700 was displayed as a pre-release model, which is a 144 MHz, 430/440 MHz, and 1200 MHz base station model. Its receiver construction is built with the direct sampling system, which has been introduced in some Icom HF radios. In the 1200 MHz band, a down conversion IF sampling system is used. The radio has the 1200 MHz band installed as a standard function. Therefore, no optional unit needs to be purchased for the 1200 MHz band. Unfortunately, the model has not been released yet in Japan or other countries, but the FB NEWS staff expects to see it in the market soon. We felt that its design seemed to be in almost the final stage. 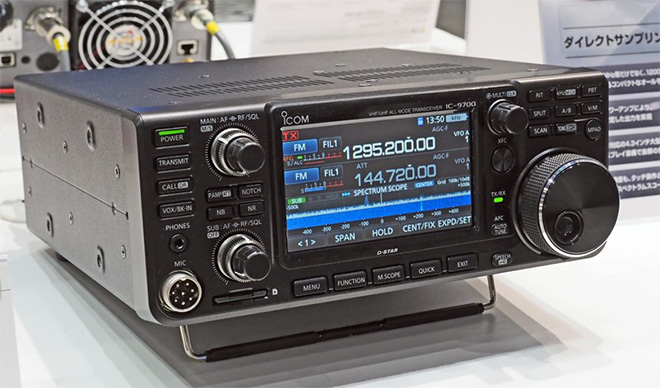 In-house products were displayed at most of the manufacture’s booths, but Icom exhibited a unique product to be controlled by your voice. We have heard that it is not a product for sale, but is to demonstrate Icom’s research. It is an interesting trial. When you speak a command into the microphone, the AI x IoT system detects the commands and a control interface controls the radio. For example, when you say “Change operating band” into the microphone, the system sends the command to the radio through Icom’s CI-V control line. 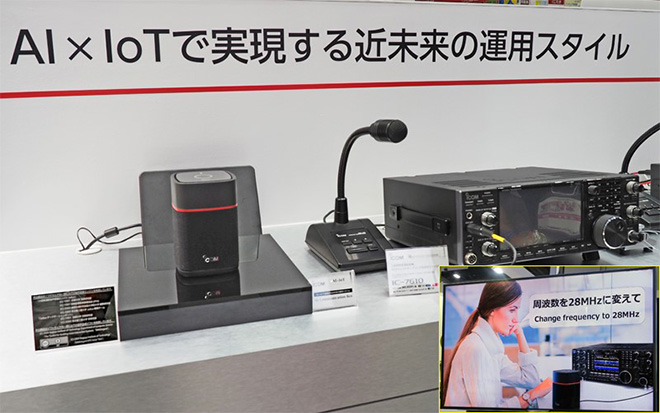 We heard good news arrived on the evening of August 24th, which was just one day before opening the Ham Fair 2018. The news was that Icom released a new firmware update for the IC-7610 that enables using the I/Q signals output from the radio. If the radio outputs receive IF signals as I/Q signals, you can use CW Skimmer through the HDSDR application software, for example. 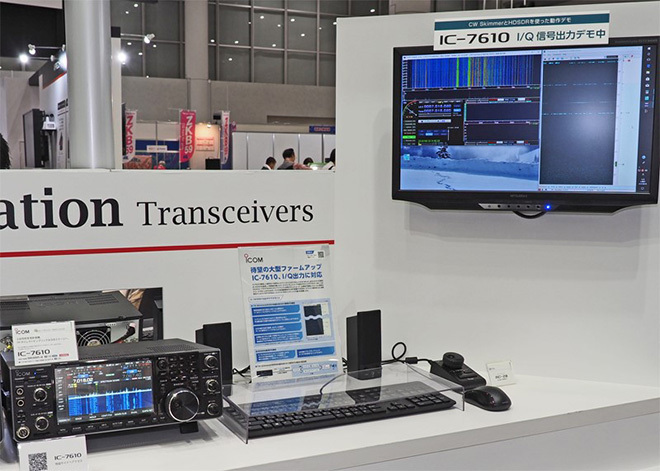 The IC-7610 outputs I/Q signals after the firmware update is done. 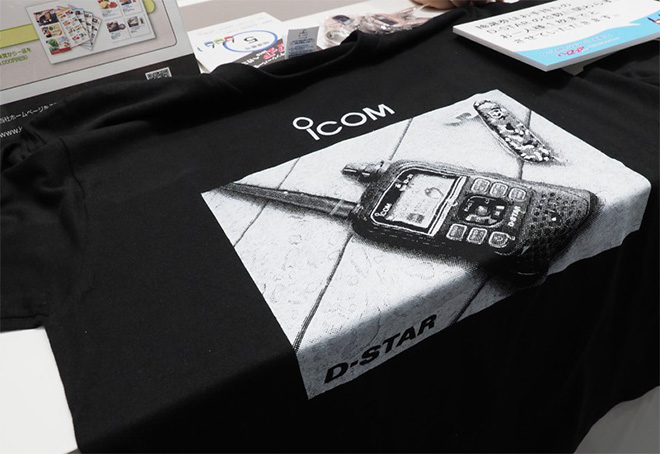 To promote the D-STAR system, Icom provided T-shirts if a user brought their D-STAR radio to the show.

JVCKENWOOD displayed the TS-890, which is an HF/50 MHz high-end transceiver. There was a demonstration corner in their booth for users to try out the radio. The transceiver has a large screen and a good operable panel layout. 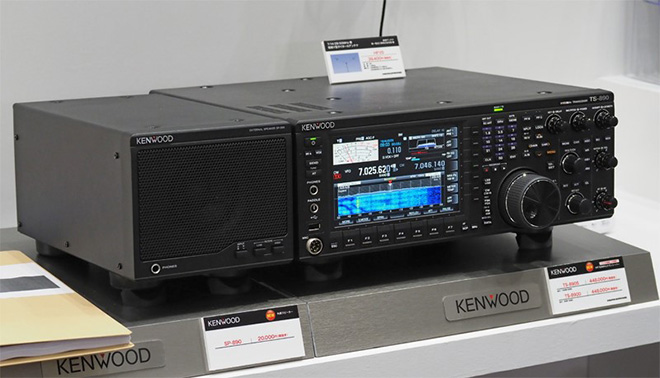 AOR displayed an interface unit for remotely controlling their AR-DV1 wideband receiver with a PC tablet. 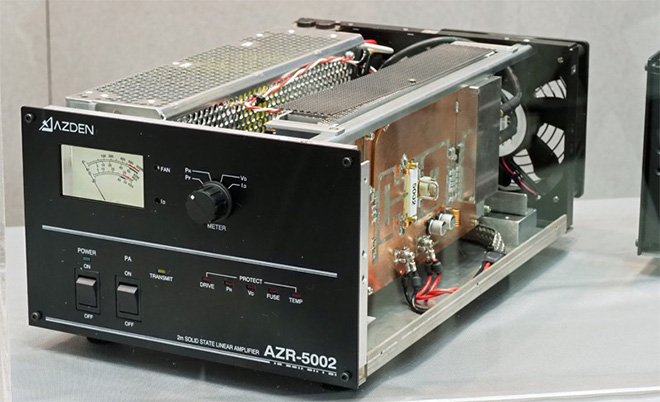 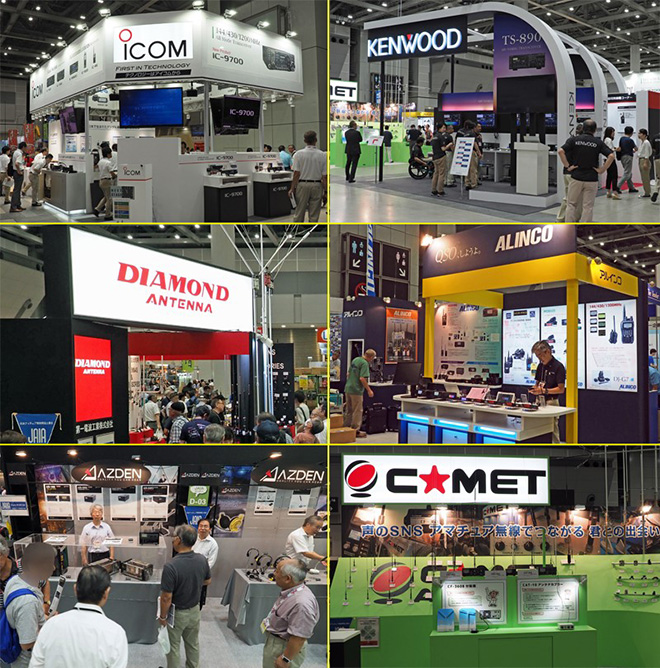 We enjoyed not only seeing manufacturer’s new products displayed, but also attending presentations they gave on their product’s new features, or new technology they were using. And of course, searching for old gear or goods in the flea markets is always fun and can add “new to you” things to your shack! 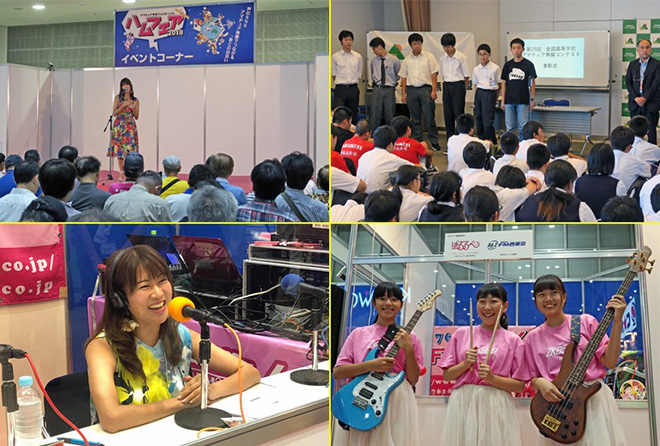 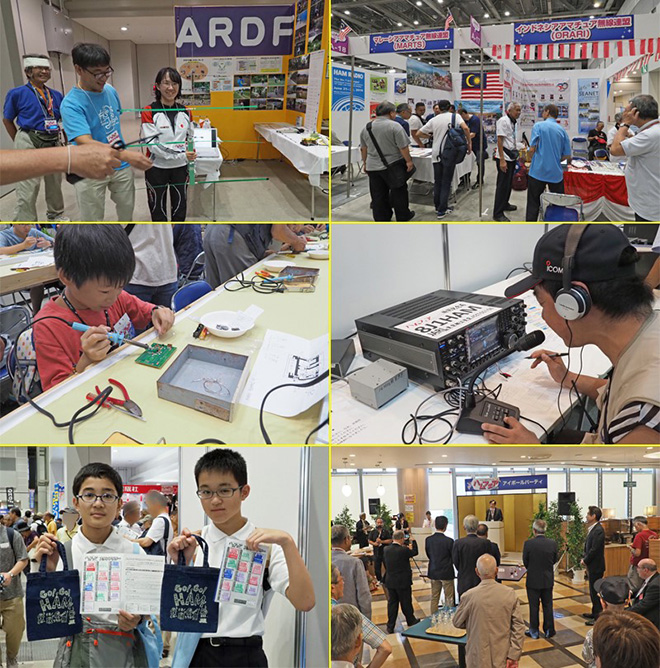 A variety of displays by many ham clubs. An Eyeball QSO party held in the evening of 25th August. 200 people attended. Bottom left: Kids showing prizes that they won in the Stamp Rally.

The monthly FB NEWS web magazine participated with their original booth this year too. To promote the FB NEWS name, they had a game for visitors to play, and also offered promotional goods. Masaco’s music CD and her original mug cup were sold during the fair. 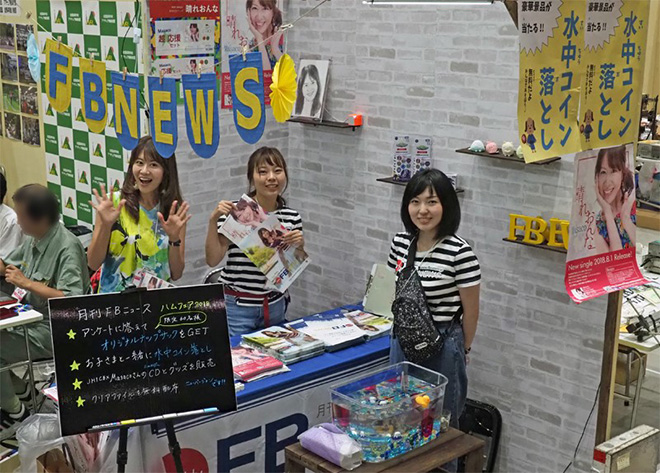