Amazing! All operators at B1HQ are school kids!

When a friend of mine was looking at social media with her cell-phone, she said to me, “Look at these pictures. There are some children who are running around holding an antenna. What’s that?” she asked. The pictures show Chinese elementary school students participating in ARDF. It was not a particularly rare picture, for those who know ARDF, but we continued to search with interest. Then we found that they are students of an elementary school affiliated with the Communication University of China. 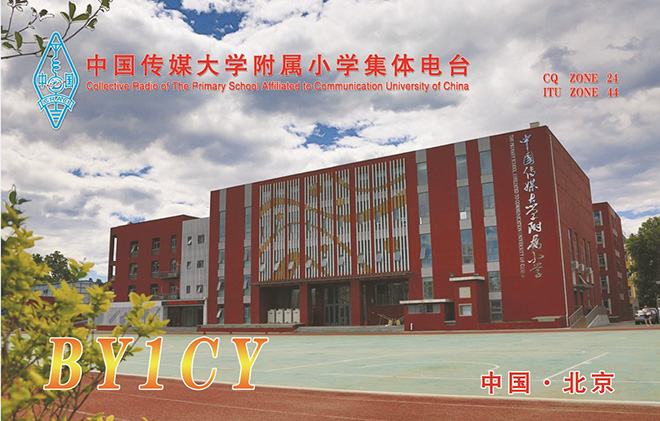 The elementary school affiliated with the Communication University of China

If you are familiar with contests, you will soon find out that these elementary school students are also involved in the IARU HF Championship contest, which can be called the “Olympics” of Ham radio contests.

A few days later we were lucky to find a teacher, Mr. Xu, who teaches the students at the elementary school, and succeeded in interviewing him using Skype. Mr. Xu is also an enthusiastic amateur radio operator, and his call sign is BD1KV. Here we write about what we discussed in the interview.

BY1CY, an amateur radio club at a Chinese elementary school 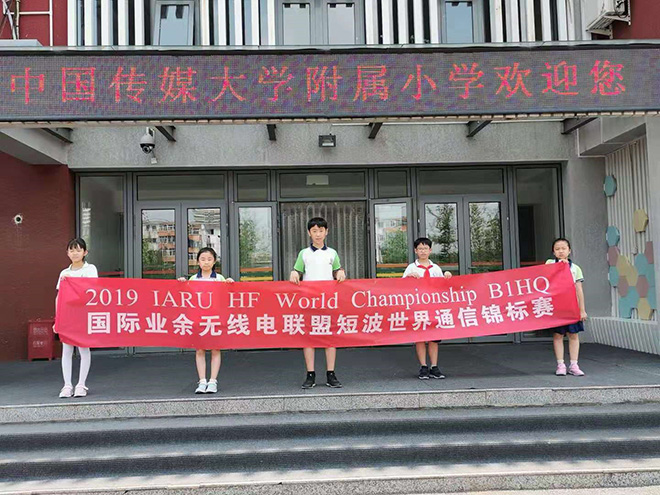 Students of the elementary school affiliated with the Communication University of China.

BY1CY is the amateur radio club at the elementary school affiliated with the Communication University of China.

Usually, the call sign is BY1CY, as shown in the picture, but when it comes to the IARU HF Championship contest, the call sign is changed from BY1CY to B1HQ, which can immediately be understood as the Federation (HQ) station. 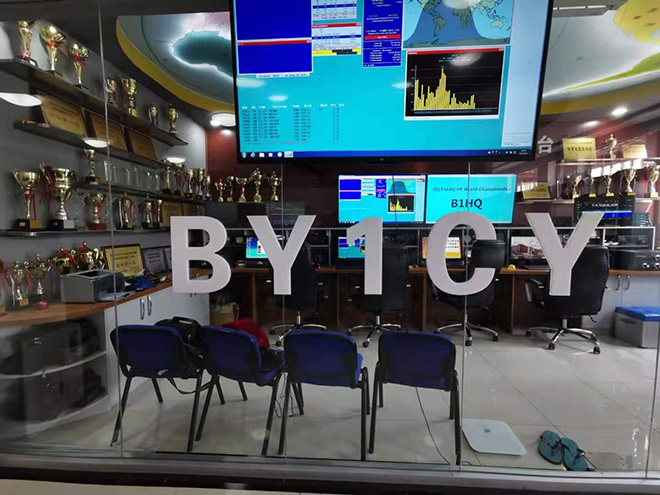 BY1CY station changed to B1HQ when the IARU HF Championship is held.

B1HQ is the call sign of an amateur radio station that represents China, and is granted specifically for this contest. It is a great honor to be able to get on the air with a call sign that says “HQ” after an area number. Even in Japan, we think that many hams know that 8N3HQ is a call sign given specifically to a station that participates in the IARU HF Championship contest as the representative of the Japan Federation (JARL).

In addition to B1HQ, the Chinese Federation (CRAC) has participated in this contest along with B2HQ, B3HQ, and B4HQ, representing the other ham radio areas in China.

We asked Mr. Xu who can participate as operators during the IARU HF Championship contest. We were very surprised to hear that all of them are elementary school students instructed by Mr. Xu. In other words, the B1HQ operators representing China were the amazing students of this elementary school!

It is also interesting to know how they are chosen as B1HQ operators. Mr. Xu told us that he selects the top 10 excellent students out of many. The average age of the selected students is 11 years old, and some students are only 9 years old! What kind of ability do the top 10 students have? Most of them can stably receive 40 wpm (200 characters per minute) for a long period of time! They are superhumans indeed. We have a friend who has won many CW divisions in global contests, but even he mentioned that 40 wpm is the limit for accurate copying.

In contests, it is very important that radio stations are very easy to operate. “CTESTWIN,” a contest logging application software, is very common in Japan. The market share of ZLOG is also high.

However, the amateur radio stations that are always winning in global contests, or aiming for top prizes, use a log application called “WINTEST.” Here you can see the screen of “WINTEST” on the monitor of a desk at B1HQ. 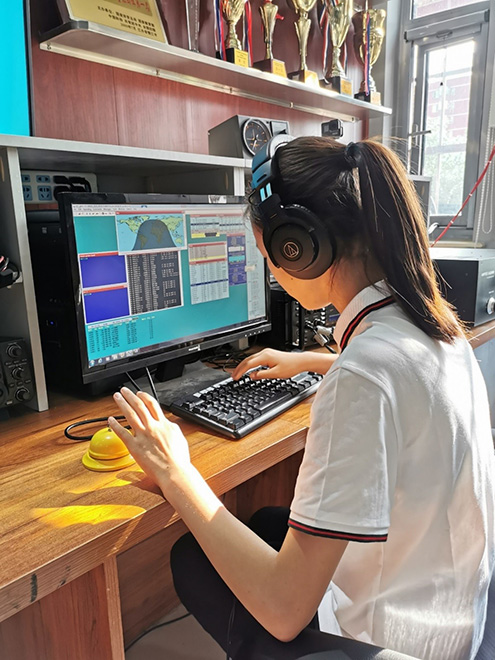 This is a B1HQ operator who is operating CW with a keyboard in the IARU HF Championship contest. 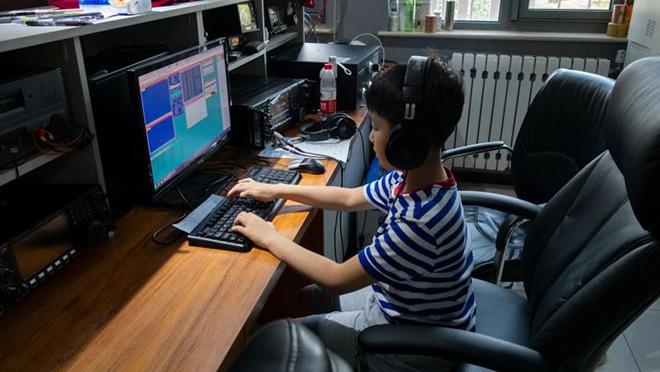 This is also a B1HQ operator. He seems to be in the first few years of elementary school. 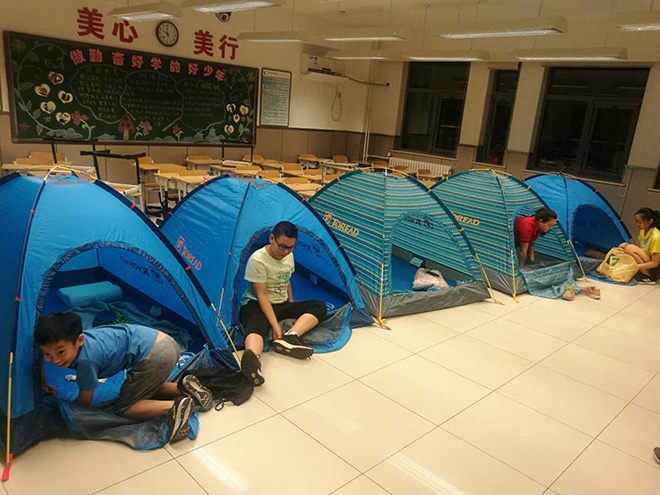 During the contest, they put up tents at the school. This is also a part of their training.

If you are an amateur radio operator, you should be interested in the B1HQ radio equipment. If you take a look at the pictures below, you will find several radios at their desk. Mr. Xu told us that this time they used Icom radios at B1HQ. The IC-7700 and IC-7851 were also installed in their radio shack, Mr. Xu said.

Though they now have some other manufacture’s radios, their first rig was an Icom radio. The most important reason why the club station chose Icom radios is that Icom radios are highly reliable, as well as their high transmit and receive performance. Besides the radios, you can see a piece of equipment with three knobs in the right corner. It seems to be an LA2000 linear amplifier from AMPTEC, which is made in China. 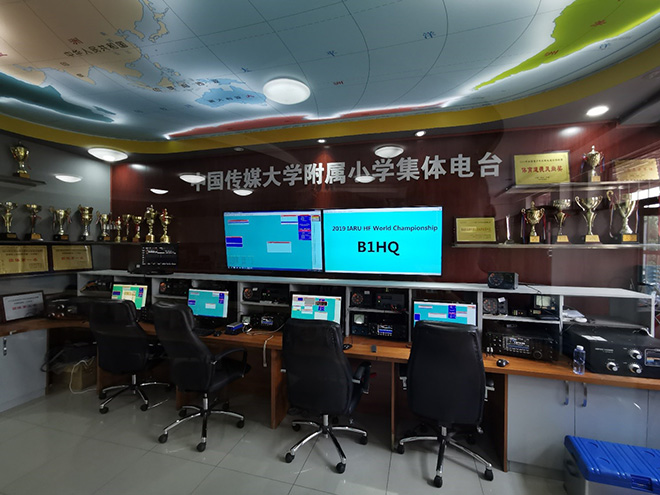 Several large and small antenna towers are installed on the roof of the school building. It appears that the antennas installed at the top of the towers are rotatable. The other antennas seem to be single-band Yagi antennas, pointed and fixed at their intended communication areas. Independent antennas per band...enviable!

These are what we sometimes see at club stations that are aiming for the top ranking in the world. This type of antenna system enables the operators to instantly change the beam direction with a switch. When they receive a very weak signal, the antenna itself is instantly switched to pick up the signal, without waiting for several tens of seconds to rotate an antenna to the desired direction. 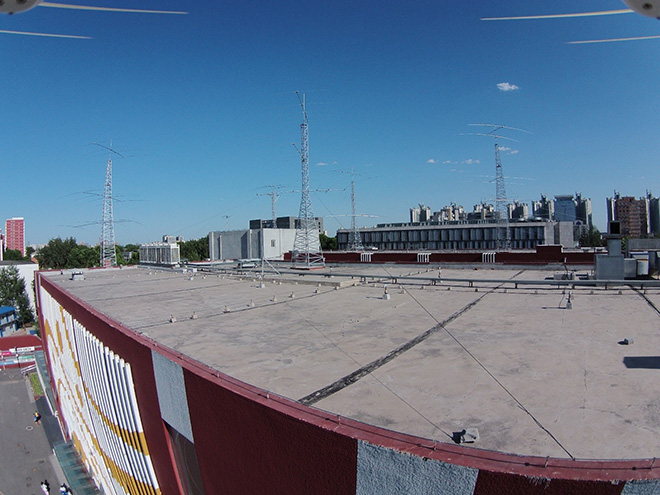 It looks like an antenna farm. All antennas are installed on the roof of the school buildings.

Finally, we would like to talk about Mr. Xu, who is mentoring those tremendous students. Mr. Xu holds a C-class amateur radio license. The C-class license is equivalent to the Extra class in the US (or the highest grade license of countries.) At the age of 19, he participated in an ARDF competition. He got an amateur radio license at the age of 23. 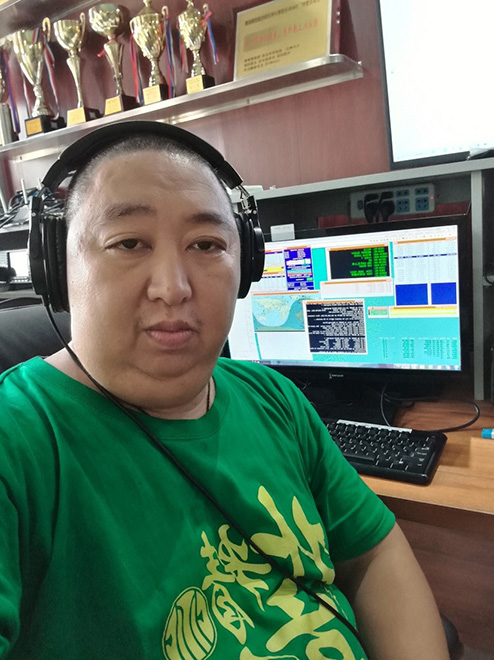 He currently has a large 4-element tri-band Yagi antenna installed at his home, and mainly operates CW on 14 MHz. He is an advanced CW operator, and constantly receiving about 35 wpm is not a problem for him at all. In the interview, we mainly talked about CW, but also talked about the current popular mode of FT8. Mr. Xu also operates FT8, which seems to be quite an efficient. However, he prefers operating actual radios, rather than PC radio operation.

It is surprising that all B1HQ operators are just very young, elementary school students. He wants to have students study the basics of communication. He thinks that CW can be a great training tool in communication, rather than Data communications using a PC.

If we find B1HQ’s signal during the IARU HF Championship contest next year, it is going to be so exciting to have a QSO with them, knowing that the operators are only elementary school students.

We would like to thank Mr. Xu OM (BD1KV/許老師) for agreeing make time for us during his busy schedule to have this interview, and for providing the nice pictures.