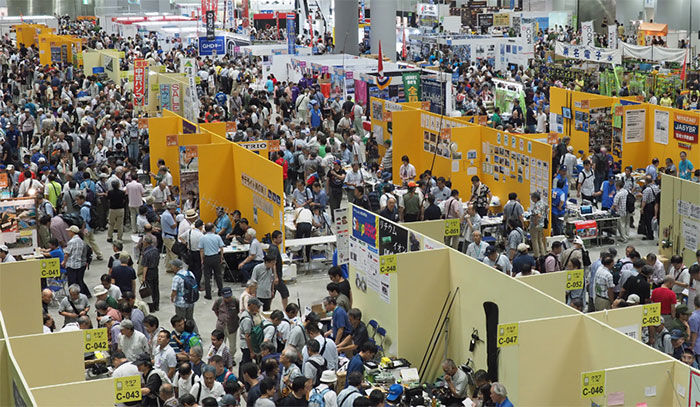 The Ham Fair is held every year at the Tokyo Big Sight (Tokyo International Exhibition Center), but next year the hall will be used as the press center for the Tokyo 2020 Olympic and Paralympic Games. Therefore, this year, “South Hall 3 and 4 Hall,” which just opened in July, was used as the venue. After entering the Tokyo Big Sight, it was a slightly longer distance to the show by using a moving walkway. But the new exhibition building was clean and well air-conditioned. However, since there is no entrance hall, general visitors were dispersed in the hall and in front of the hall, creating a long waiting queue. 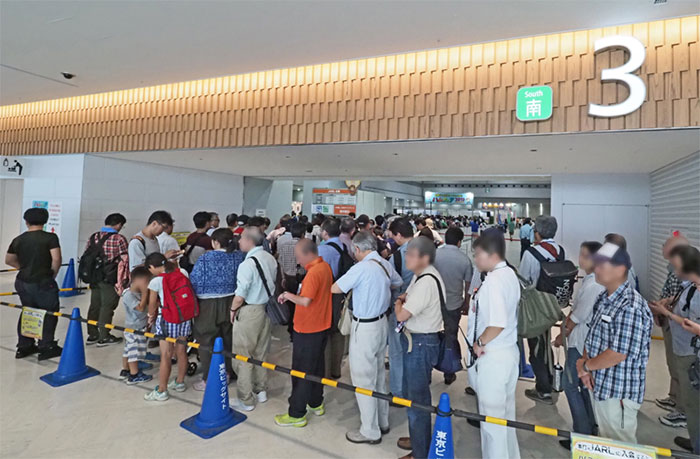 Before the opening on the first day, there was a long queue at the entrance

The opening ceremony was held from 9:45, and Yoshinori Takao, Chairman of JARL (JG1KTC) said, “This year's Ham Fair will be held with the theme of “World Friendship” as the 2020 Tokyo Olympic and Paralympic year. Today, IARU Chairman, IARU 2nd Regional Chairman and 3rd Regional Chairman, Federations in United States, Korea, Thailand, Malaysia, Indonesia, Luxembourg, German, and all other countries around the world are visiting. We welcome you and hope to deepen your friendship with Japanese hams. Please enjoy the ham fair so that you can have fun and discover new things over the two days.” 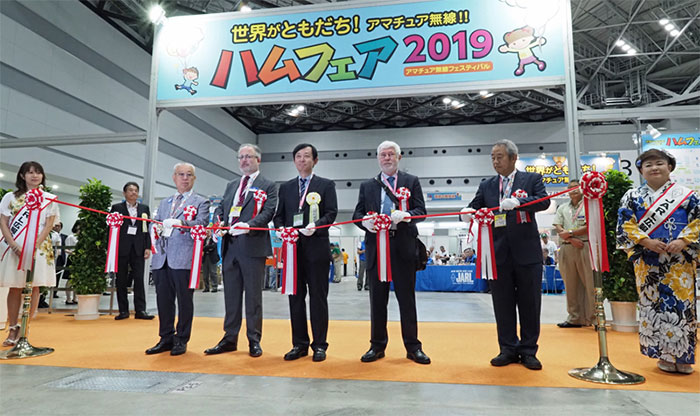 Takao, chairman of JARL (center) and guest representatives at the tape cutting ceremony 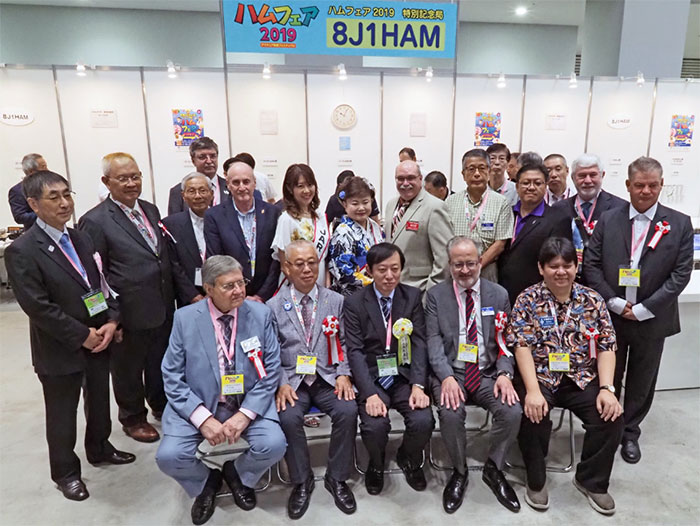 Commemorative photo with guests and related people in front of the 8J1HAM, the Special Anniversary station for the Tokyo Ham Fair 2019

After the tape cut, the general visitors quickly went to their favorite corners, such as the booths of radio equipment manufacturers, the JAIA corner, the club corners where about 190 groups such as amateur radio clubs exhibited, and the special corner established by JARL.

Icom was also eager to show products that meet the expectations of amateur radio operators this year. 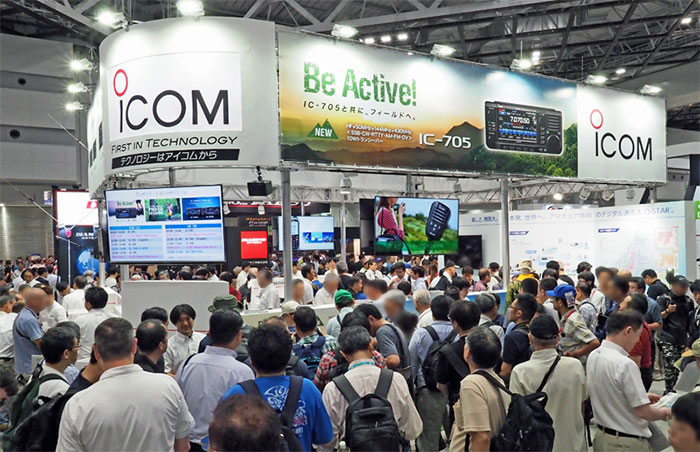 The most noticeable product was the new IC-705 portable transceiver. The compact body size is 200 W x 80 H x 85 D mm, and weighs about 1kg. It outputs 10W with an external 13.8 V DC, and covers HF, 50 MHz, 144 MH and 430 MHz, in each of the SSB/CW/RTTY/AM/FM/DV modes. (Frequencies where the DV mode can be used may vary, depending on country) By installing the included BP-272 lithium-ion battery pack (that is an optional pack for the ID-31/ID-51 handheld transceivers), enables easy portable operation with a maximum output of 5 W (when the BP-272 battery pack is used). A GPS antenna and GPS logger function are also built in. 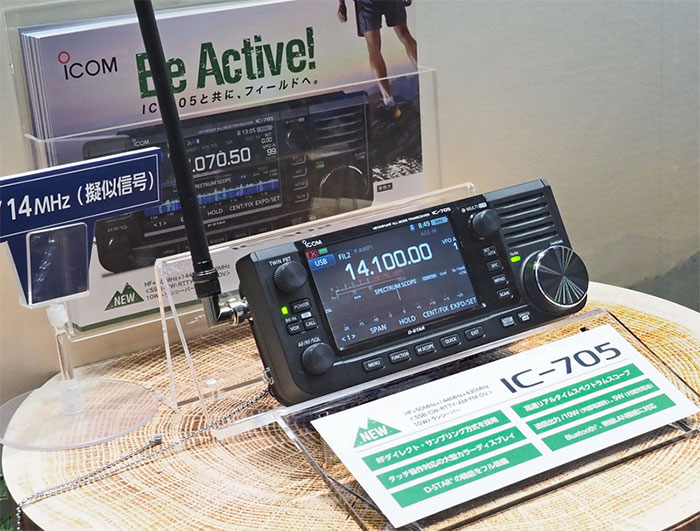 The IC-705 is a portable radio that Icom announced for the first time in a long time. It covers the amateur bands from HF to 430 MHz, in all modes including D-STAR (DV)

The receiver uses the RF direct sampling method (down conversion IF sampling method for 25 MHz and above), which has become an Icom standard. In addition to achieving extremely excellent phase noise characteristics, it provides a high-speed/high-resolution, real-time spectrum scope and waterfall. The front panel is equipped with a large Touch Screen color display, the same 4.3 inches size as IC-7300 and IC-9700.

Furthermore, the optional LC-192 multi-bag, with various functions such as mounting of antennas and having holes for passing coaxial cables and microphone cables, will be available. Visitors were looking forward to the release of the IC-705. 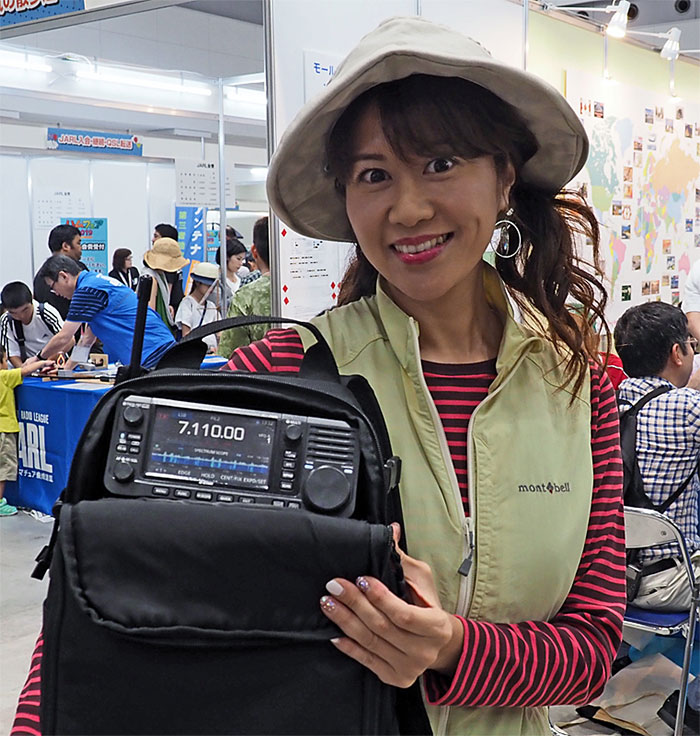 In addition, Icom announced the IC-PW2 HF + 50 MHz band 1 kW linear amplifier. LDMOS transistors are used in the final amplifier stage, enabling full power and full duty cycle operation that can obtain a 1 kW output, even for a long transmission periods of time. It has a built-in antenna selector that can connect 2 exciter transceivers and 6 antennas, especially useful in contests. It supports the Single Operator Two Radios (SO2R) operation format, which may be one of the biggest sales points. 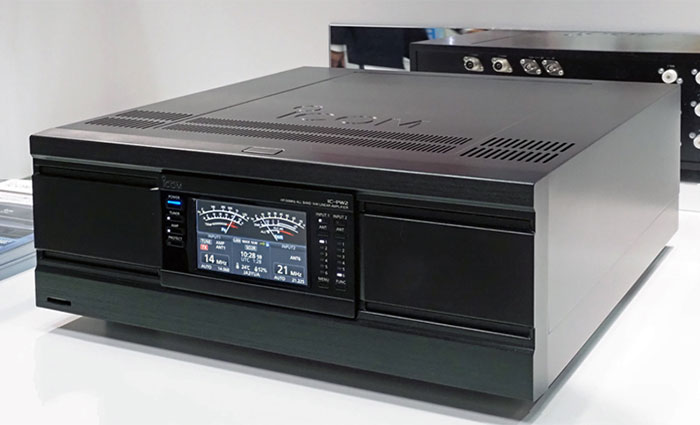 In addition, in the concept exhibition corner, an experiment of “Translation Transceiver” using Icom's IP transceiver was conducted. When a visitor sent a message in Japanese, it was automatically translated into English through the server and Cloud, and the other station outputs the voice in English (The reverse is also possible, making an automatic conversion from English to Japanese). The degree of completion was high, and many visitors confirmed the accuracy and convenience of the translation. 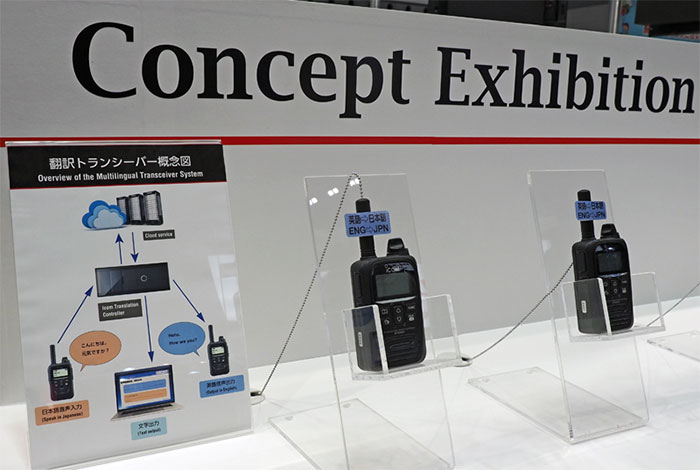 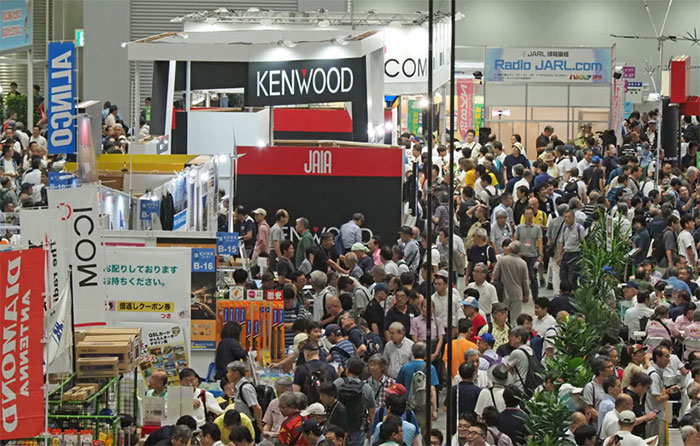 JVC Kenwood has established a trial listening section where visitors could experience the operation of the TS-890 HF+50 MHz band high-end transceiver that was announced in August of last year. 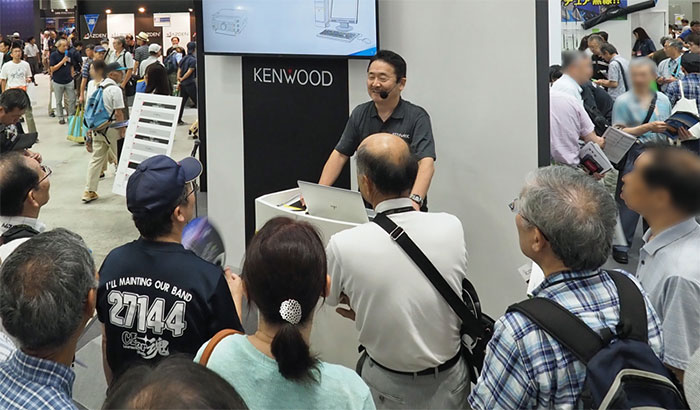 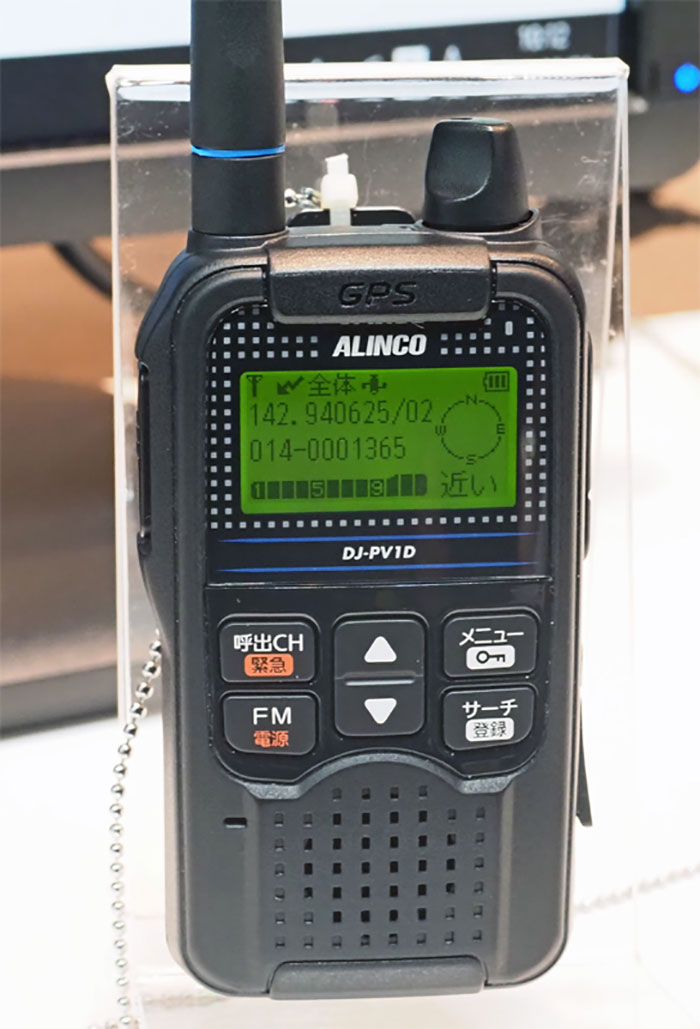 Azden first displayed the AZR-1500 (1.5 kW output) for the overseas market, with the same design as the AZR-1000 HF + 50 MHz band 1 kW linear amplifier announced just before the ham fair. AOR also announced the AR7400, which can simultaneously receive 4 different frequencies on the VHF/UHF air band, and the AR5700D, a broadband receiver compatible with various digital radios. 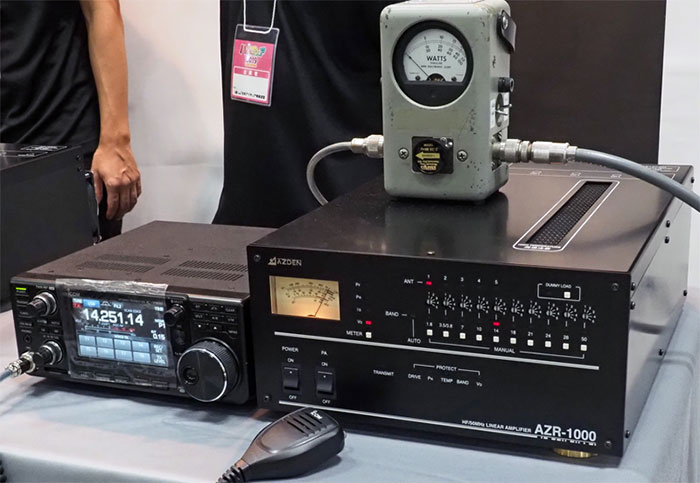 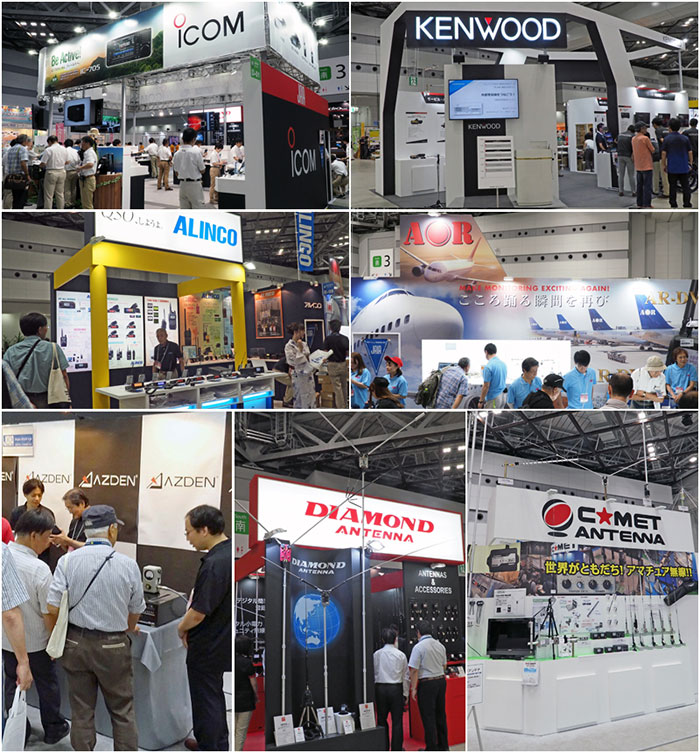 A lot of fun exhibitions and events!

At the ham fair, we enjoyed watching the exhibition at the JARL corner and listening to talk shows and lectures at the event corner. Various projects were held this year. Here are some photos. 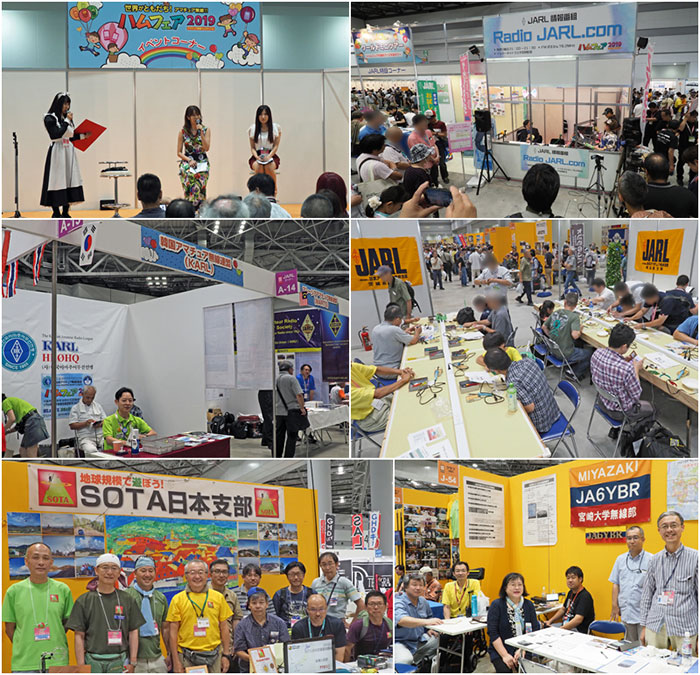 From the evening of the first day, an “Eyeball party” organized by JARL was held at a restaurant in Tokyo Big Sight, and 200 people participated to deepen their friendship. A guest this year was Hirohiko Izumida,7K1KJK (ex. JH0CPA), a member of the House of Representatives, attended the meeting. 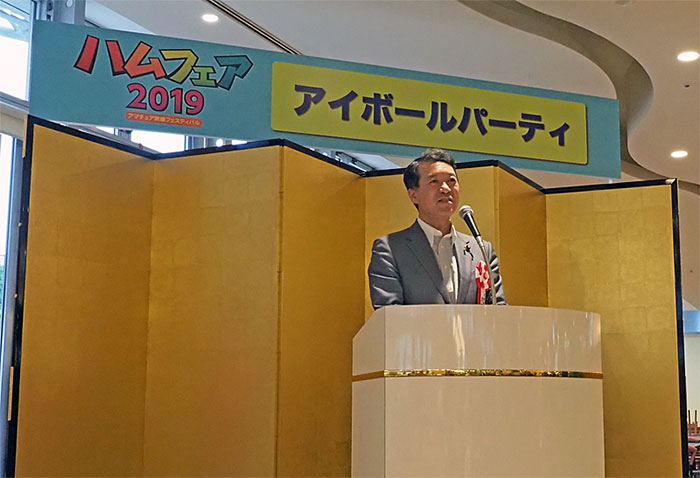 7K1KJK Hirohiko Izumida, a member of the House of Representatives, spoke at the eyeball party. 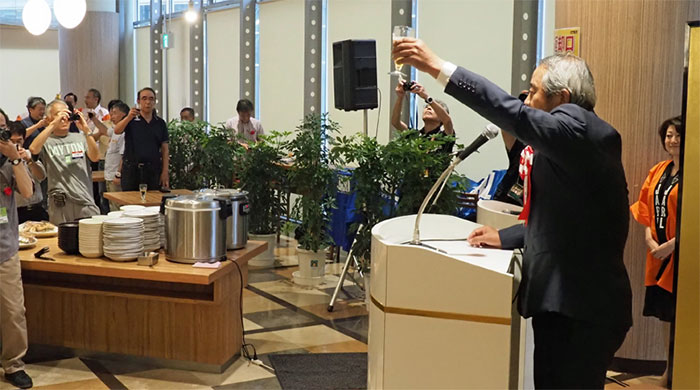