You may have read my earlier post titled Radio Contesting Journey — HF, VHF, Roving (https://www.fbnews.jp/201911/ww05/) and wondered about that last category, VHF Roving. Well, here’s more information along with highlights from my recent operation in the ARRL January VHF Contest.

VHF contesting is all about exchanging grids and maximizing the number of QSOs you can make on frequencies above 50 MHz. That usually includes 144 MHz, 432 MHz, and well up into the microwaves.

So, what’s a grid? It’s actually officially termed a maidenhead locator grid. This grid pattern divides the earth into ever more specific sections. For example, I’m in grid EM12kv. ‘E’ indicates the longitude field while ‘M’ indicates the latitude field. The ‘1’ narrows it down to longitude square and ‘2’ the latitude square. The ‘kv’ does the same thing for sub squares. You can even add further numbers for an extended square. 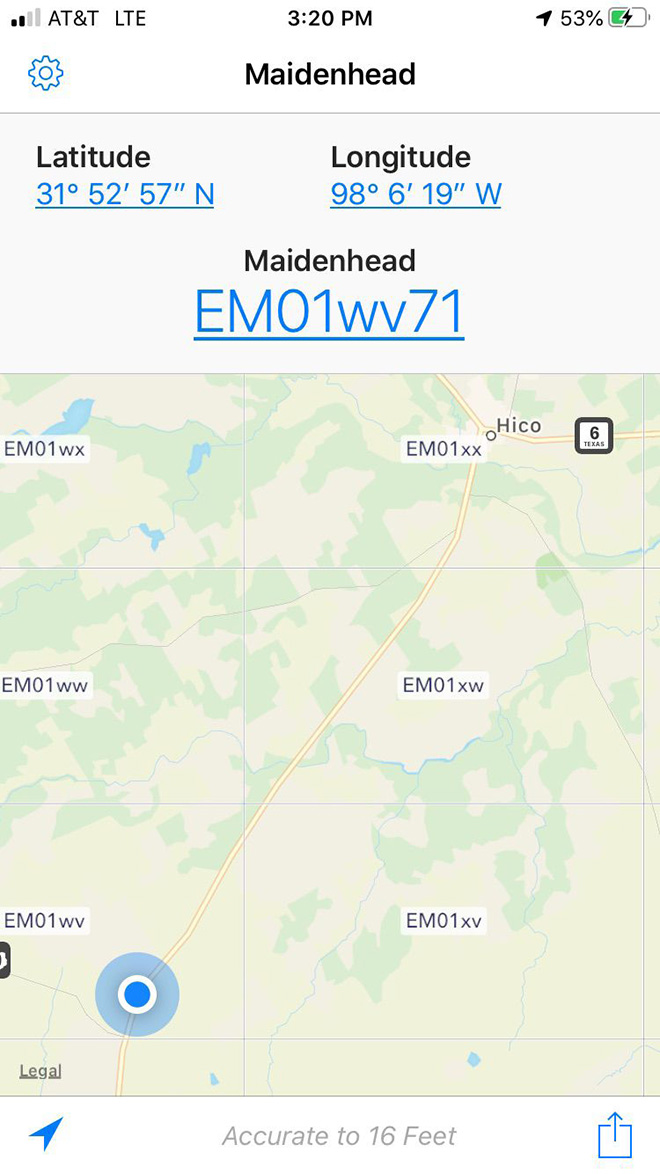 Cell phone display of my location in grid EM01 using the Maidenhead App. This is a great way to determine your grid and to record it for your contest records.

For VHF contests we use only the first four as the exchange. So I would send “EM12.” UHF and microwave contests use the first six to get even more specific.

A four digit grid square is 1 degree latitude tall by 2 degrees longitude wide. In the central USA that roughly equates to 70 miles (112 kilometers) north to south by 100 miles (160 kilometers) east to west.

One of the challenges with VHF contesting is the limited range of communication coupled with the limited number of stations that are on the air. Now this can be overcome with some pretty nifty propagation modes such as tropospheric scatter, sporadic E, meteor scatter, and even moon bounce. But yet another way to add QSOs and grids to your contest logbook is by contacting rovers.

So, what is a rover? It’s basically packing your VHF equipment into a car or truck along with some way of mounting antennas and driving around the country during the contest. Along the way, every time you enter a new grid, you can work all the same stations over again. This adds QSOs and grids to their logbooks and does the same for you as a rover.

There are lots of ways to setup as a rover. Some place omnidirectional antennas on top of their car and make contacts while they are driving. Others stop and set up directional antennas and point them where they expect to find stations. Others do a combination of both types of setup.

There are separate contest entry categories for rovers. I've chosen the limited rover category. This means only the four lowest bands: 50, 144, 222, and 432 MHz. The power level is also limited to 200 watts on the two lowest bands and 100 watts on the two highest bands. Other categories allow more power and many more bands up into the microwaves. Limited rover suits my budget and to a certain extent simplifies my station set up.

Furthermore, my style of roving is to drive to a previously scouted location in each new grid, set up, and contact stations. Other rovers also operate while they are driving which gives them more opportunity to work other stations. Often, these type of rovers are two-person operations with a driver and operator. 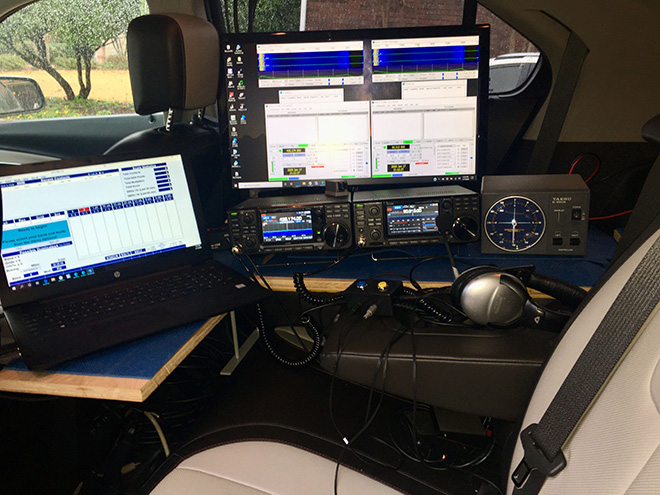 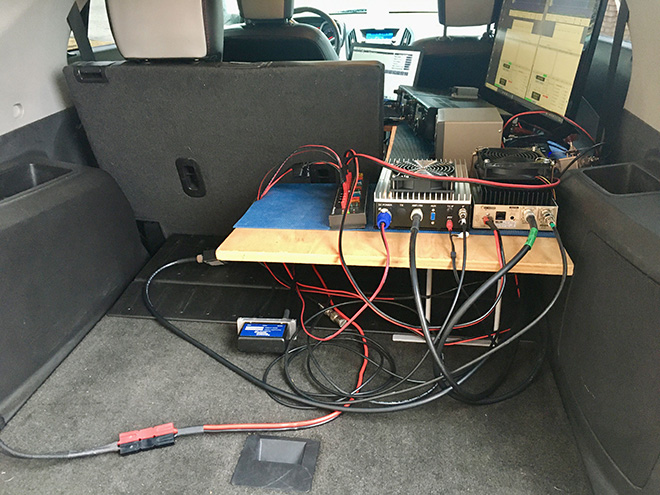 The rest of my gear including power distribution, 6 meter amplifier, and 222 MHz transverter.

My operating position is in the backseat of my SUV. There I use a laptop for logging and to run WSJT-X, see my article titled WSJT-X — Disruptive Technology @ Work (https://www.fbnews.jp/201908/usa_en/) for more info. WSJT has become very important to VHF contesting as it can generate QSOs at very weak signal levels.

For antennas, I’ve built a rotator mount that fits on top of my SUV. On the mast is a 6 meter Moxon along with Yagis designed for rover operation with eight foot booms for 144, 222, and 432. The overall height of my antennas comes in at 12 feet (3.6 meters).

A big part of roving is determining and optimizing your travel route. You essentially need to find a quick way to get from one grid to the next. That’s best done traveling north-south since moving from grid line to grid line is roughly 70 miles (112 kilometers) versus the 100 miles (160 kilometers) required traveling east-west. You further need to find locations with line-of-sight views ideally in every direction. That’s not too hard to do in North Texas, which is pretty flat.

At the start of the contest on Saturday, I set up near the point south of Dallas, Texas, where four grids come together. In my case it was EM11, EM01, EM02, and EM12. I generated a number of QSOs and grids in the first three but had some trouble getting to an EM12 location — tree problems!

In the first three grids I was at locations that I’d used in several previous contests. But EM12 was a point mapped out using online maps. As I drove down this road, which I had not traveled before, I discovered a low hanging tree branch only after it had snagged my Moxon antenna, twisted it on the mast, and bent the side rods. Good grief.

At that point I needed to stop, climb on top of my car with wrenches in hand and return the antenna to its normal setup as near as I could make it. It worked, fortunately. 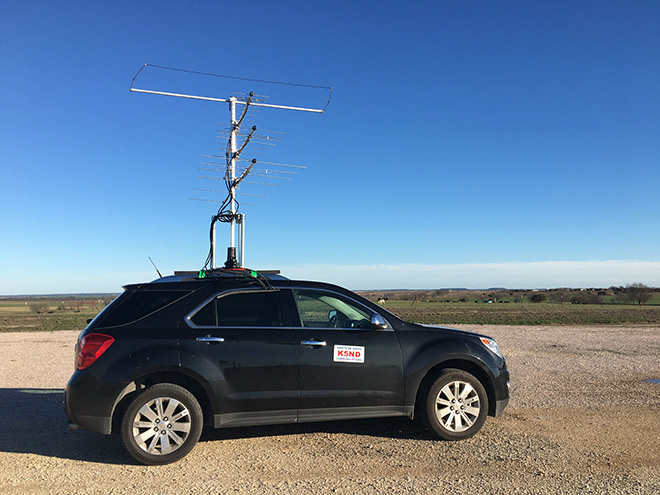 Setup early in the contest from grid EM01. This was before my encounter with trees. 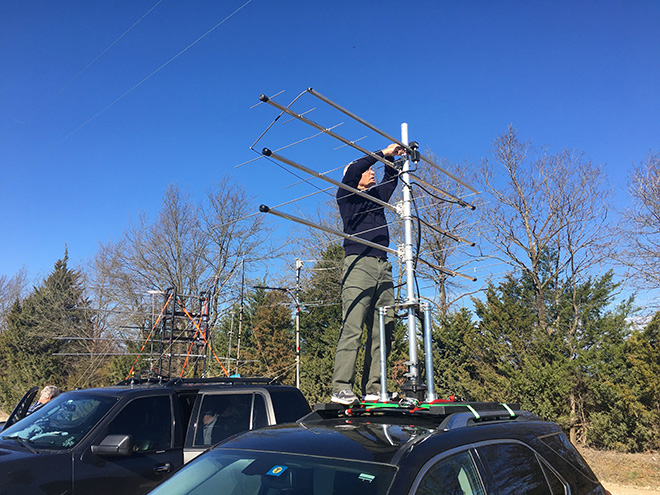 Repairing my Moxon antenna after an encounter with low hanging tree branches. This happened on both Saturday and Sunday!

The other “highlight” of my contest weekend was meeting up with two other rovers on Sunday morning in southern Oklahoma at the intersection of grids EM14, EM24, EM23, EM13. This get together allowed the rovers to move from one grid to the next working the other rovers in other grids which maximized their QSOs and grids worked. It also allowed a brief stop to compare stations, tell stories, and just to say hi to one another. 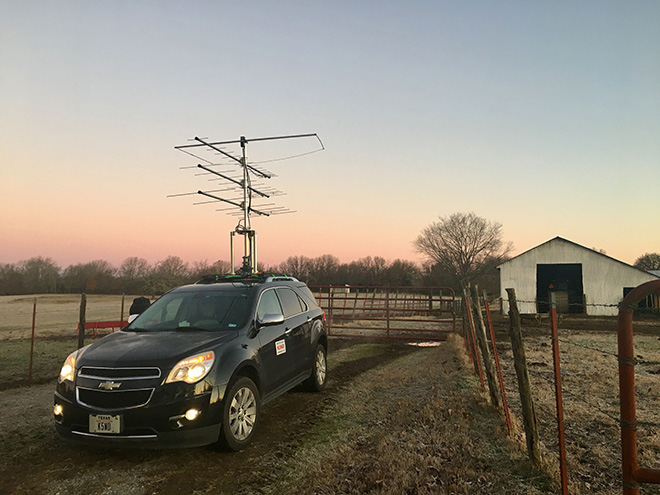 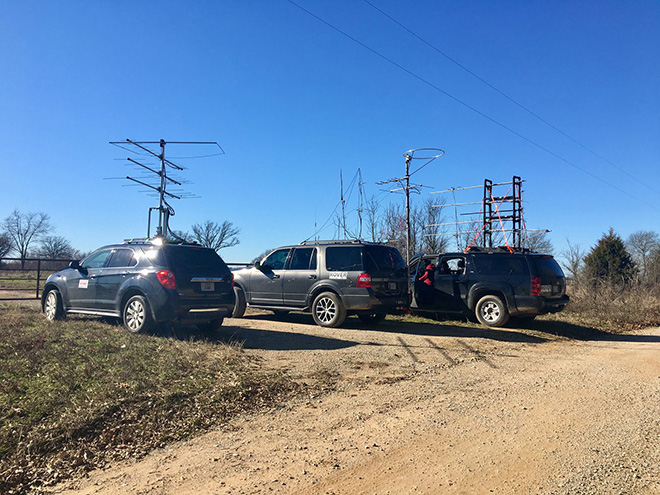 Meetup with other VHF rovers in southern Oklahoma.

For VHF propagation January isn’t the best time for sporadic E on 6 meters. Although I did manage to work into Arizona and Colorado during a brief opening on Saturday evening. I was also able to work a bit of meteor scatter on 6 meters Sunday morning. The rest of the contacts were pretty much line-of-sight or tropospheric openings.

I sure enjoyed using the IC-7300 and IC-9700 with their SDR receivers and the spectrum display. Those displays readily pointed out stations that were on the air and I just needed to adjust my tuning to pick them up. They also worked great with WSJT-X and the VHF contest logging software. 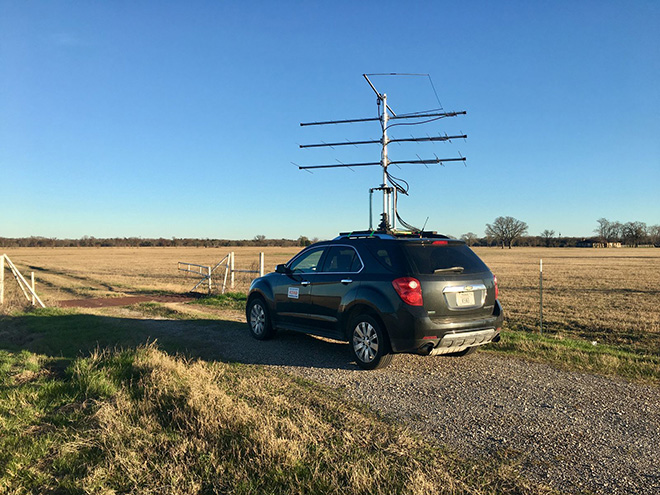 Set up for operation in EM21 on Sunday afternoon. The Moxon antenna on top is looking a little worse for the two tree snagging incidents.

As always, I’m now working on setup improvements for the next contest, the ARRL June VHF Contest. This contest offers many more opportunities for 6 meter sporadic E openings that can really ramp up your score.

I’ll be ready and hopefully can avoid snagging trees with my antennas!