Shoryuji is a small, historically old, but very nice castle located in Nagaokakyo city, Kyoto. It is about a 45 minute drive from my house in Kawanishi. I found the castle using jcastle.info, as usual. The Jcastle website provided the historical information written below.

“In 1339, Shoryuji Castle was built by Hosokawa Yoriharu, a leading retainer of Ashikaga Takauji, the first shogun of the Ashikaga Shogunate. The castle is located a strategic point to help defend Kyoto, the capital at the time, from incursions from the West. During the Onin Wars, the Iwanari Tomomichi was lord of the castle for the western alliance. After Nobunaga conquered the region, he stationed Hosokawa Fujitaka here. Fujitaka fortified the castle and built a double moat around it. The castle was also used as a base by Akechi Mitsuhide in the Battle of Yamazaki after the death of Nobunaga in 1582. Parts of the castle were cannibalized for use in Yodo castle, and it was left in a poor state. Nagai Naokiyo became lord of the castle in 1633 and attempted to reconstruct it, but the castle was decommissioned when he was moved to Settsu province in 1649.”

I visited the castle on the 20th of March to take pictures and ask for permission to operate. The person in charge of the park and castle was very nice and supportive of my project. She asked me to send a request to operate, which I did. A few days later she sent me the “official application for park use”. I received permission and operated there on Friday, April 9th.

The Castle and grounds 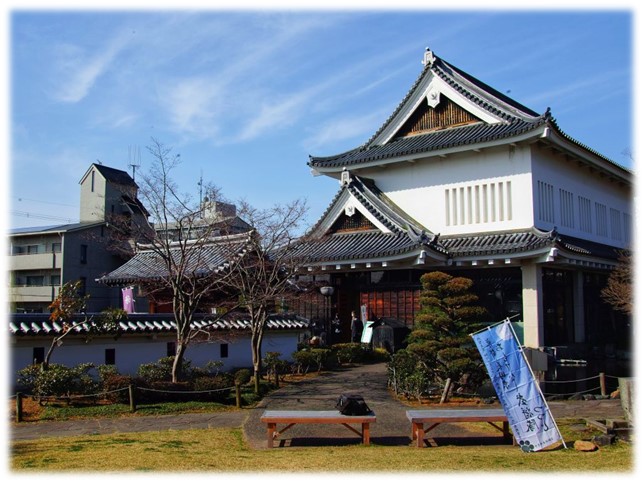 The reconstructed Tenshu (castle keep) is a community center.

The reconstructed walls around the Honmaru (main inner courtyard) are complete and go all around the main castle grounds. 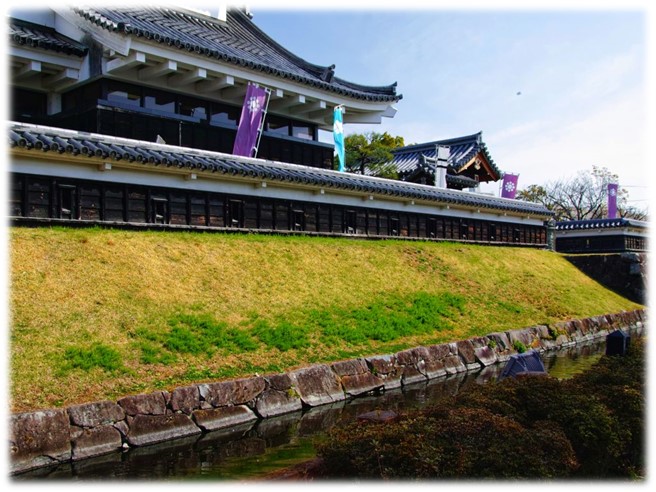 The moat and wall in front of the Tenshu.

The main entrance is just across a wooden bridge. 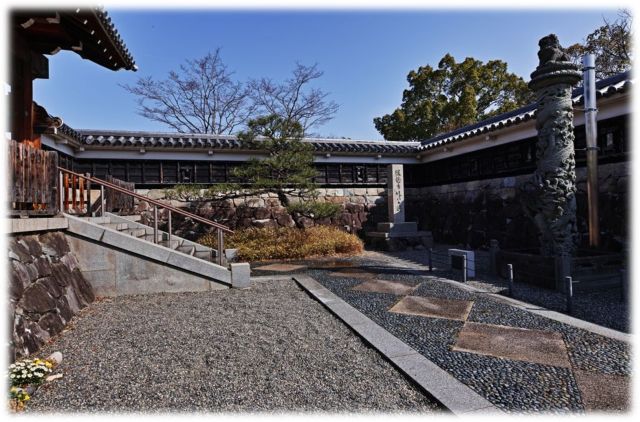 The entrance area. The main gate is to the left.

The main gate to the castle. 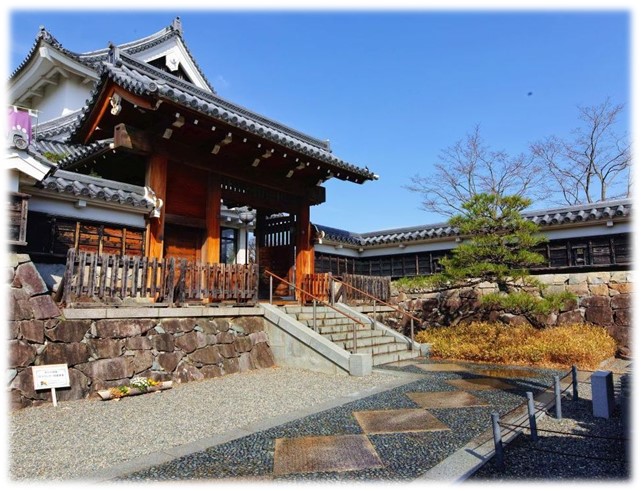 It is big, with a thick frame and doors. 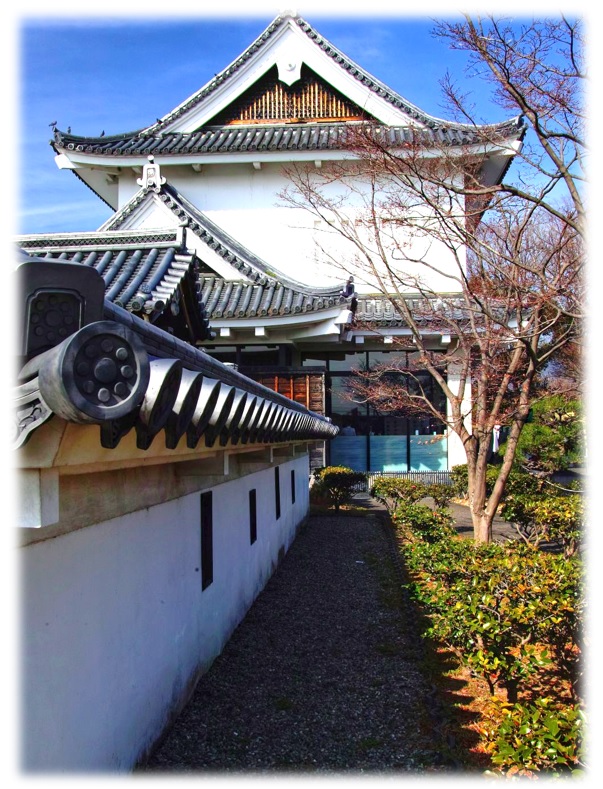 The entrance is to the left.

There are a couple of Yagura (turrets) in the corners of the castle grounds. 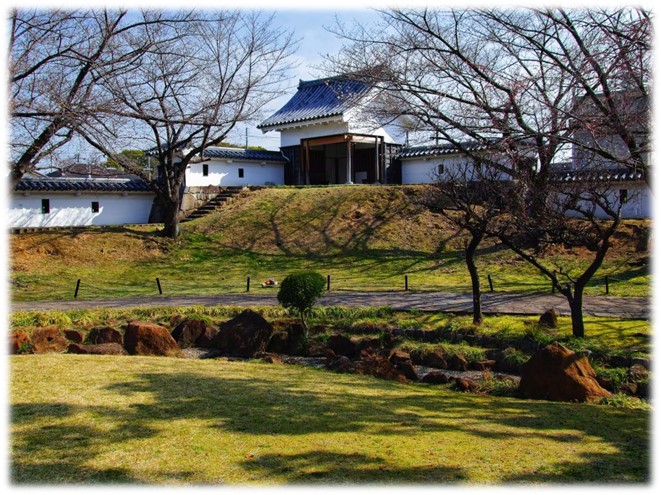 The honmaru grounds are very well maintained and clean.

Parking and the Terrace 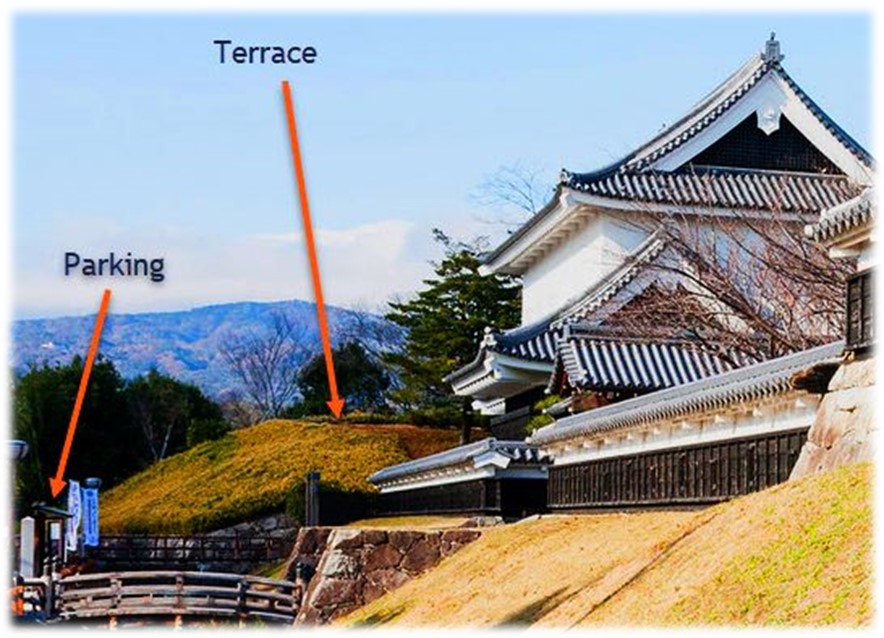 The terrace was my choice of operating locations.

There is a parking lot next to the park, which is next to the castle grounds. You have to get to the lot early as there are only about seven parking stalls there. I had to go to the City Hall office to pick up my permission paperwork, then rush back to the parking lot....just in time. The terrace is where some say the original Tenshu might have been located. 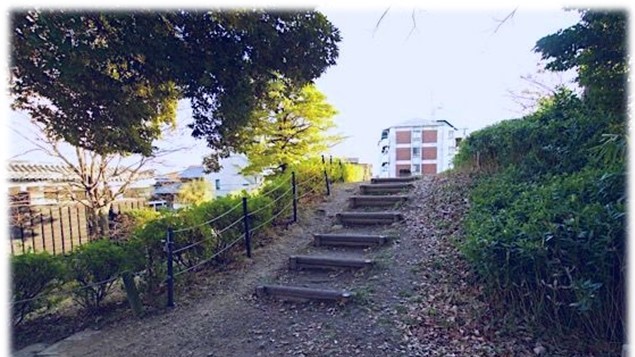 This is the trail to the terrace. The reconstructed Tenshu/community center is to the left. 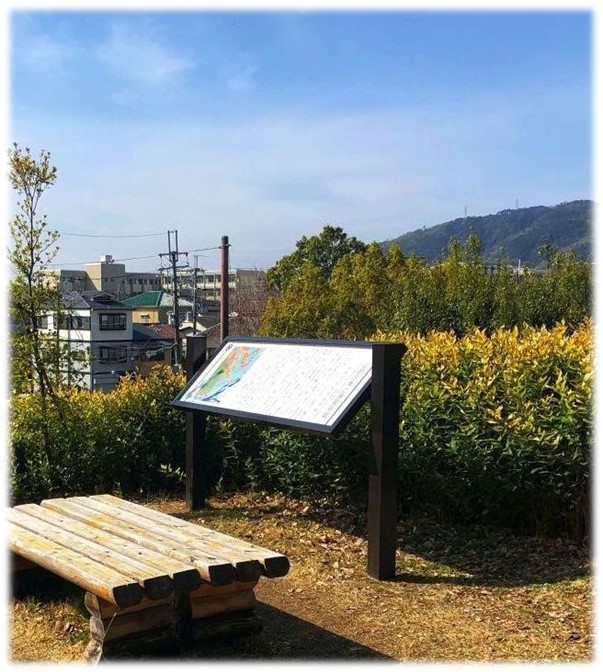 This is where I choose to set up and operate my portable station. I thought it would be isolated enough behind the keep so that few visitors would climb the steps to the terrace. However, as it turned out, several visitors came to the terrace. Several people asked about my activity and were interested in Ham Radio.

Luggage carrier with my stuff! 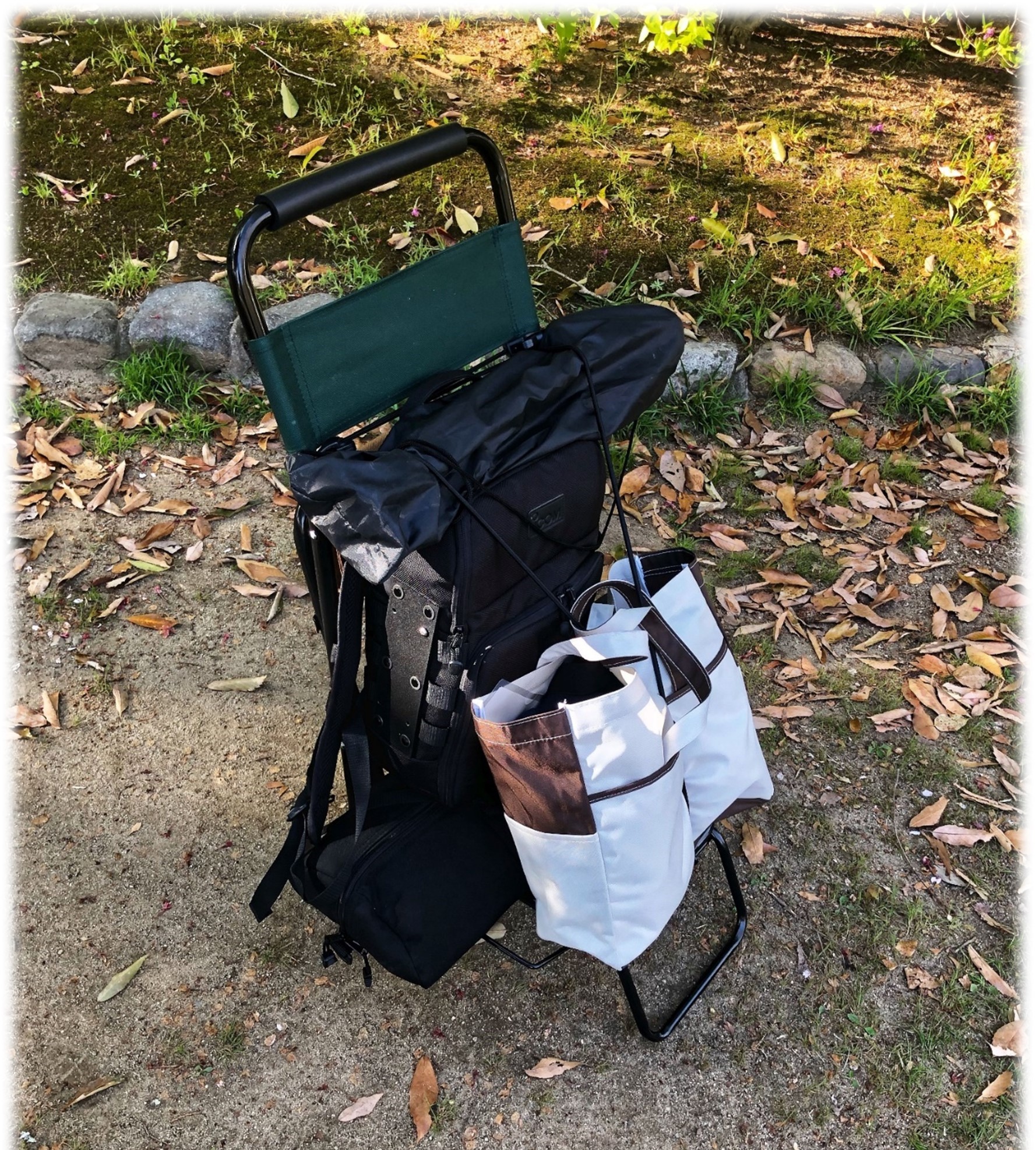 This time I brought a luggage carrier with me instead of the usual hauling cart. The carrier was a bit easier to pull up the two flights of steps, one of which had a lot of stone steps. There is a fold-out seat on the other side of the carrier. Strapped to the carrier is my Buddipole® bag, the LC-192 with the loop antenna and the IC-705 inside, tripods, and in the white bag is my camera and antenna analyzer. 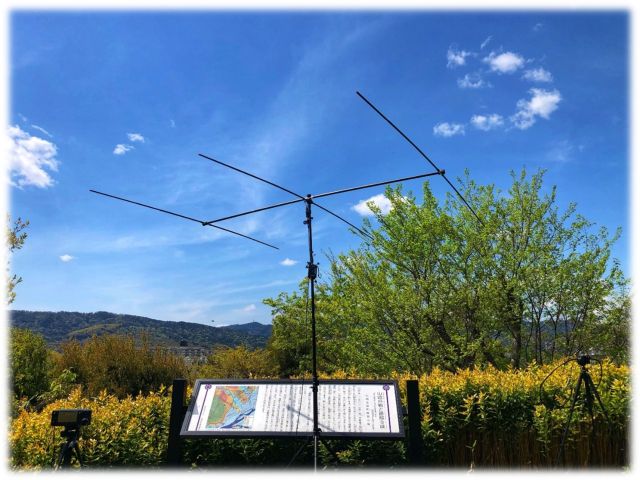 The 3 element 6 meter Yagi is the same configuration as the one I built and used at Tanabe castle, and is described in a lot of detail in the April 1 issue of FB News. The link is: https://www.fbnews.jp/202104/ww01/ The antenna was pointed south-southeast towards Osaka and I made several contacts with it. Six meters is quite popular in Japan, and should open up to some DX in Taiwan, Australia and even Hong Kong in the future. 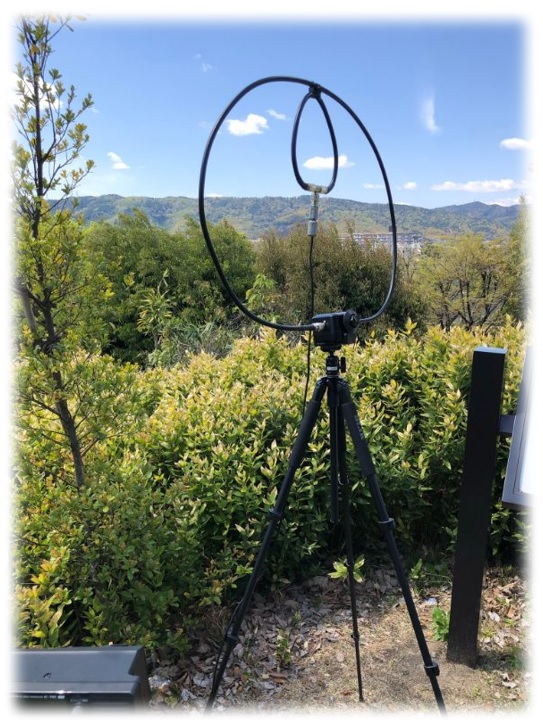 I tried 40 meters with the loop antenna, but propagation was not right for me, and also low power was a limiting factor. I hope to try higher bands in future castle visits.

I also worked some D-Star repeaters through the Kyoto Minami repeater, using call sign and Gateway routing. VHF and UHF operation will be covered in a future JACOTA article. 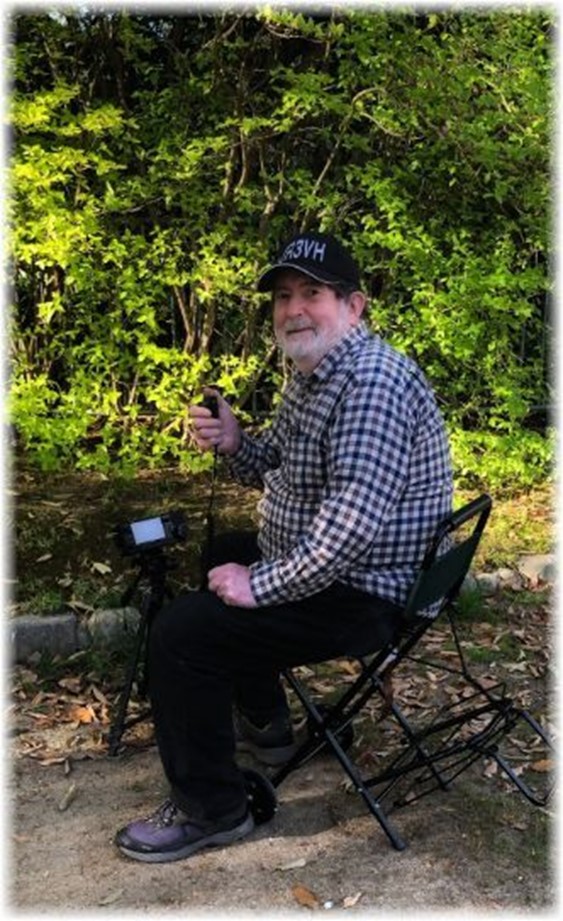 The seat in the luggage carrier makes operating much easier. I can see this cart being used a lot in the future as I explore castles that will require a longer distance from my car to the castle and operating area. It hauls most of the gear I need, including the small plastic tripod that I use to mount the IC-705 on to operate. I am going to try to find a smaller camp table to hold my log and other things. 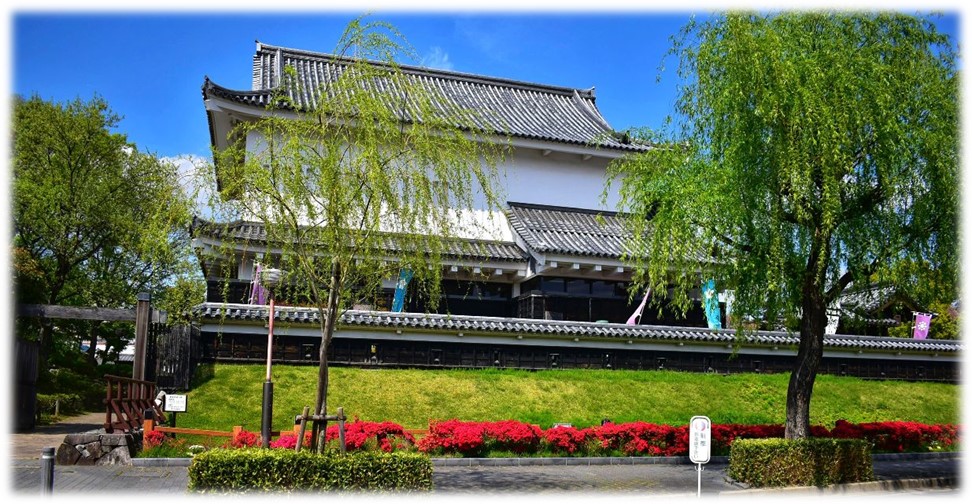 The keep, wall, and moat in a wide view.
The terrace is just to the left of the gate, and up a hill.

Shoryuji castle is one of the nicest and most fun castles to operate from. It has a lot of history, and if you have a chance, I highly recommend visiting it.