Portable operation has been a part of Amateur Radio for a very long time. As soon as powering equipment with batteries became possible, hams took their radios, batteries, and a piece of wire for an antenna into the outdoors and made contacts with other “portable” or fixed stations, all over the world. Operating from picnic tables and hill tops evolved into DXpeditions to rare and remote locations. As equipment became smaller, lighter, and more efficient, hikes to mountain tops became common. Groups like “Summits On The Air” (SOTA, where mountain tops are activated and registered) are a very popular part of ham radio worldwide. SOTA spurred hams to go to national, state, county, and city parks to operate, and “Parks On The Air” (POTA) was born. In Europe, there are lots of castles and castle ruins that have become popular operating spots, and so there is now a group called “Castles On The Air” (COTA) where you can register your operation/activation.

In Japan, there are lots of castles, and castle ruin sites, and they are very popular places for tourists to visit. There are many in the Kansai (JA3) area where I live, and I thought it would be fun to operate ham radio from the castle grounds. I tried to contact to the European COTA group leaders to ask about activating Japanese castles, and I finally just received a reply. But before receiving the reply, I began a “Japan’s Castles On The Air” (JACOTA) project, and this article is the first report on my “JACOTA” adventures.

The first castle I operated from is Sonobe castle ruins in Nantan city, Kyoto prefecture. Sonobe castle was built in 1868…the very last castle to be built in Japan. It was built to be used as a refuge for the Emperor, in case of a war in Kyoto. A lot of the castles in Japan were dismantled during the Meiji period (1868 ~ 1912) and the only original Sonobe castle structures left are the gate, the guardhouse, and the turret at the far end. 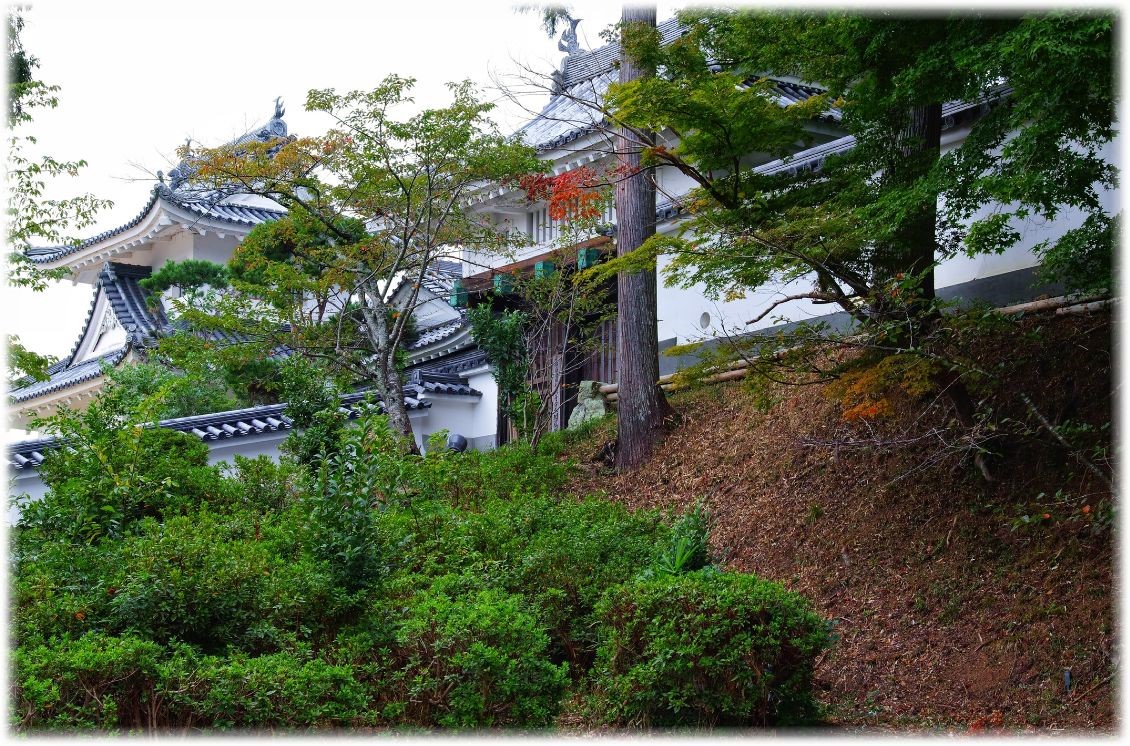 The Sonobe castle Keep was reconstructed in a park near the original castle site, and now houses the International Culture Center. I visted there, explained what I wanted to do, and asked for permission to operate at the castle. It was a bit challenging to explain about why I wanted to raise an antenna, connect it to a radio and call CQ to other hams…. But in the end, the kind staff agreed, and I went around the castle grounds to find a suitable operating spot. I found a small hill not far from the Keep that seemed to be a good location.

It is always a good idea to meet with the facility staff, explain what you want to do and ask permission. You do not want to just setup a portable station and operate without the staff knowing who you are or what you are doing. With permission, you can relax, enjoy operating ham radio, and maybe write an article about your adventure. 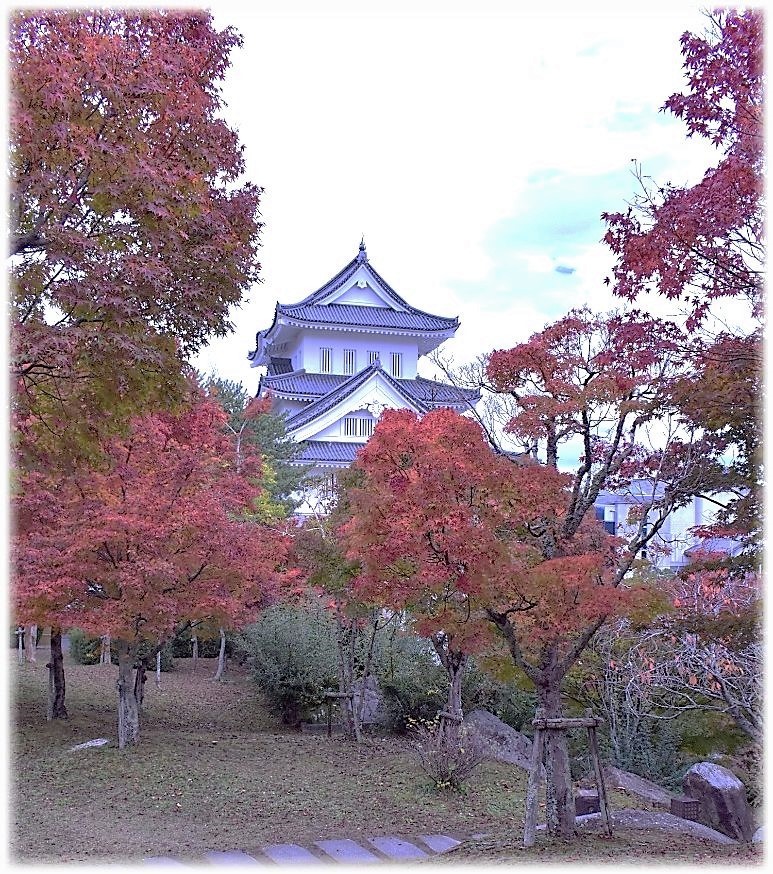 A couple of weeks later I went to Sonobe castle, visited the office again and let the staff members know I would be operating at a location in the park, and thanked them for giving me permission. I then took my Buddipole® antenna system, antenna analyzer and LC-192 multi-bag with the IC-705 inside to the spot in the park that I had decided on during my first visit. The autumn leaves were beautiful, and they really made the day a doubly enjoyable visit.

The bag at the top of the picture contains the Buddipole® tripod, mast, cable, and antenna element components. The second bag contains extra antenna arm sections, guy stay wires, and other accessories I brought along in case I wanted to make antenna configurations other than a horizontal dipole, or a vertical antenna. The long bag on the left contains a 12 foot shock-cord whip, and the small blue bag contains my antenna analyzer. The last bag is the LC-192 multi-function backpack containing the IC-705, mic, batteries, notebook, and other items. 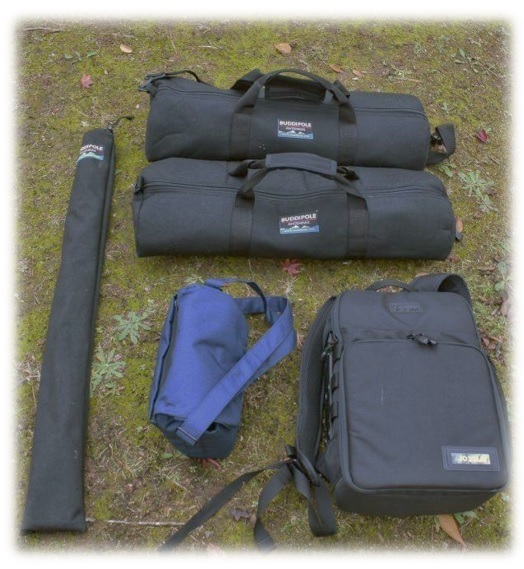 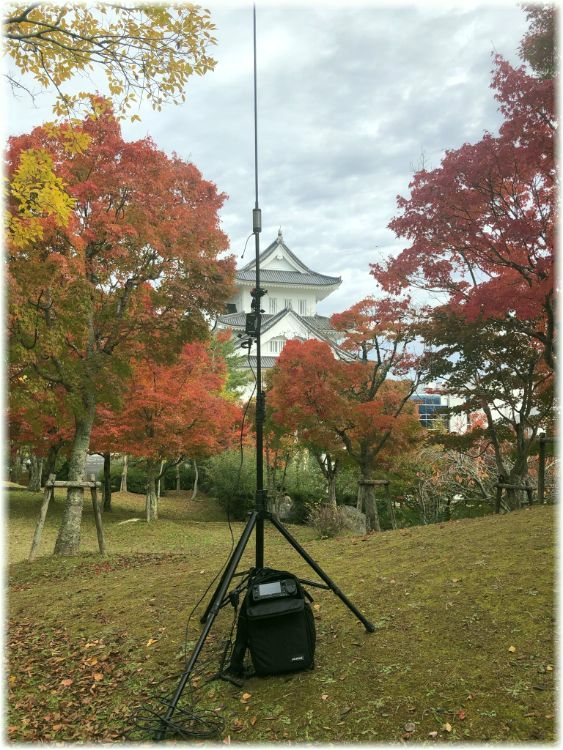 The radial wire is on a wire winder, which makes it easy to keep neat and ready for use. Just unwind the length you need for the band you will be using and attach it to something that will keep it about a meter above the ground. Keeping the radial wire at least one meter above ground is important for the vertical antenna I have made. I found a small stump were a limb had broken off, and it worked great to hold the winder at the right length and the right height. I operated on the 40 meter band and made the antenna with a 9.5 foot (2.9 meter) long expandable whip and extended the radial wire to 25 feet (7.7 meters). 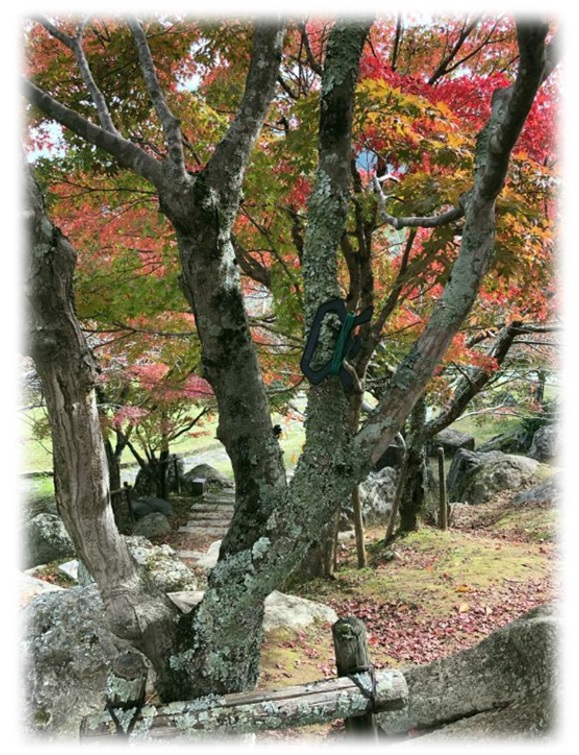 In the future I will also add two 22 inch (56 cm) long antenna arm sections and the long whip, or a 14.5 foot (4.46 meter) long “shock-corded” whip for an extended active element antenna for the 20 meter band. I will then adjust the tap on the coil, and the length of the radial, to make the antenna resonate on 20 meters. The Buddipole® system enables you to configure various antennas, for various bands.

The Triple Ratio Switched Balun (TRSB) enables you to select three ratios, 1:1 (50 ohms), 2:1 (25 ohms) or 4:1 (12.5 ohms). The vertical has an impedance of less than 50 ohms, and the ratio of 2:1 gave the best match. The unit also has an isolation transformer built in to help keep current off the outside of the coax cable. 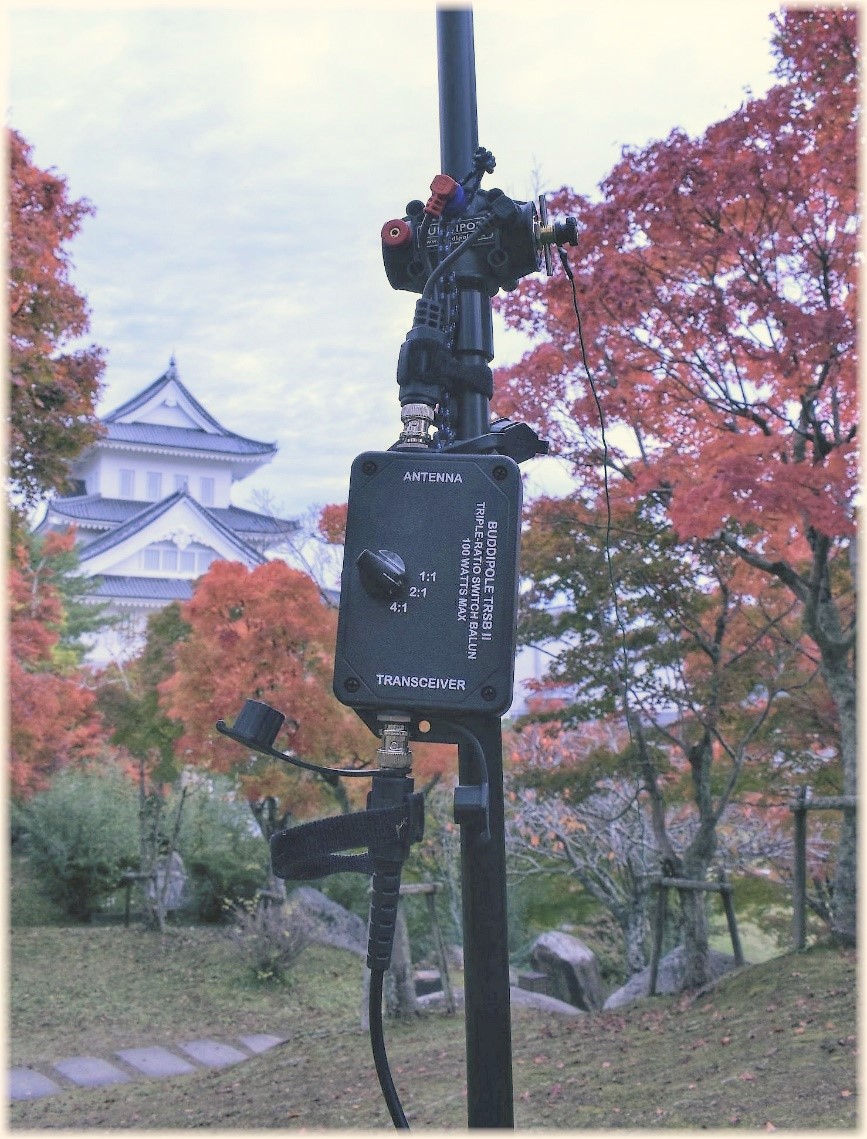 Using my RigExpert® AA-230PRO antenna analyzer, I adjusted the coil tap and the length of the radial wire and brought the SWR down to 1:1.2. If you do not have an analyzer with you, you can tune to a clear frequency close to where you want to operate, and then slide the coil tap up and down the coil to find the point with the most noise. Secure the clip to that point on the coil and it will be very close to where you want to be. The IC-705 has a convenient SWR meter function that you can use to see the antenna SWR, and you can use it to optimize the antenna for the operating frequency that you want to use. 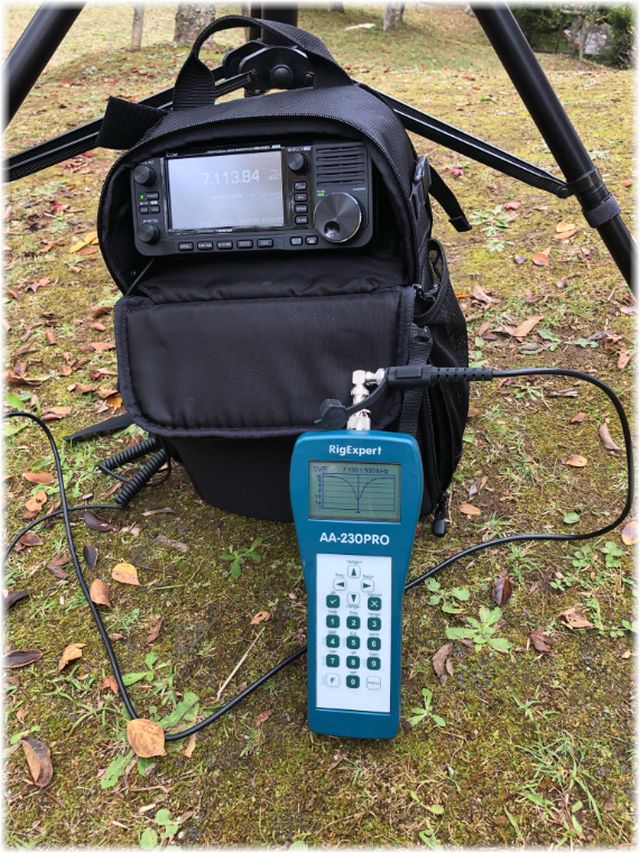 The operating location was at the top of a hill in the castle park. The park was empty when I arrived and for an hour or so later. Then a group of elementary school children and their teachers arrived and took over the park! A few of the kids wondered over and stared at the operation wondering what was going on. You should be prepared to answer questions from others that come to the place you are operating from. You might even meet another ham! 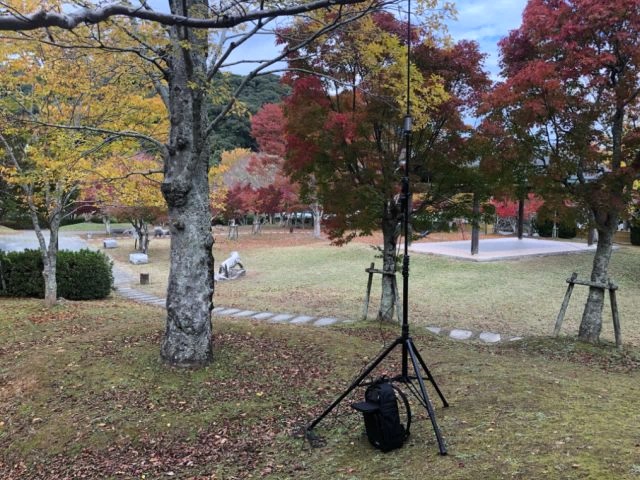 All set up, tuned up and ready to go. The band was packed with contesters, but I was able to make a very nice long contact with a ham in Akita, a prefecture in northern Japan, who spoke excellent English. We talked for about 15 minutes. Later, more and more people began coming to the park to view the autumn leaves and take pictures, so I packed up and headed home. 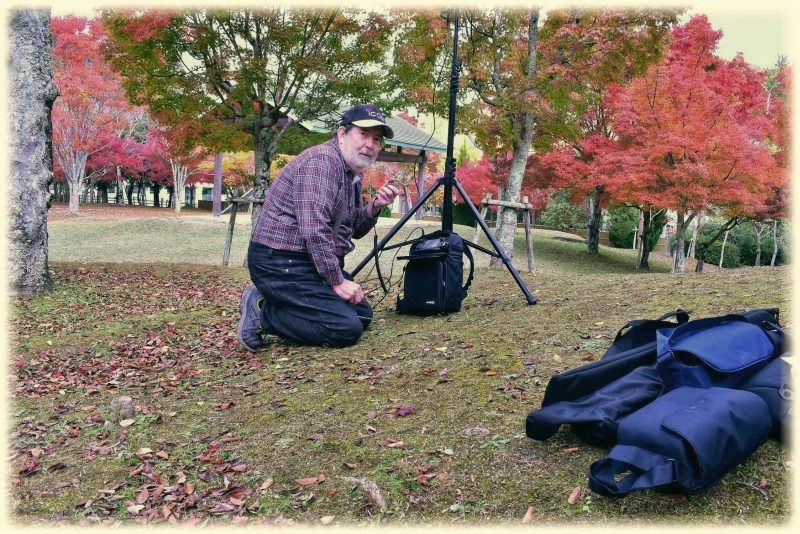 The next JACOTA challenge will be at Fukuchiyama castle in Fukuchiyama city, Kyoto prefecture. I visited the castle ahead of time and asked the castle and museum director for permission to operate at a future date. Luckily, he is also a ham, and quickly agreed to let me operate. Stay tuned for that article coming later. 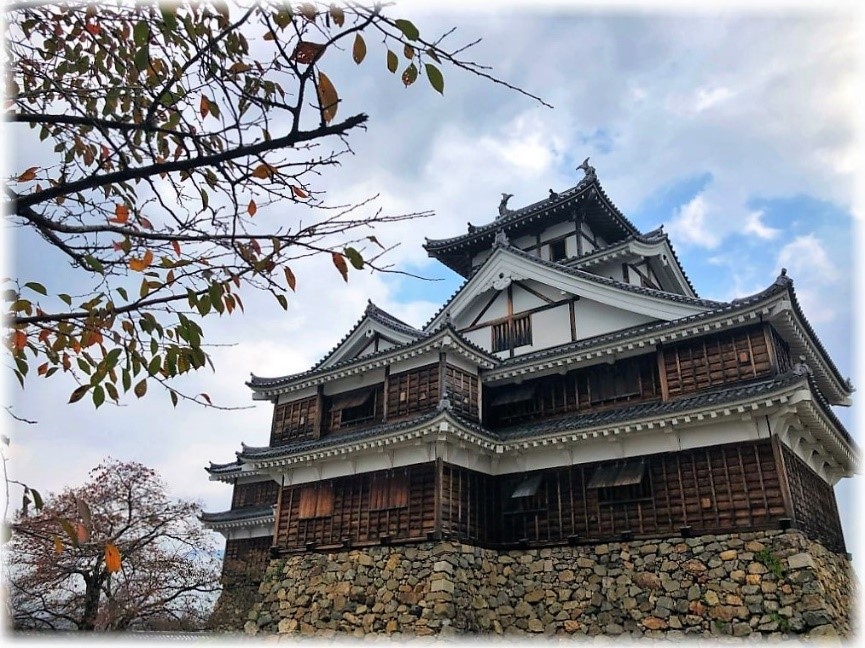 If you have a castle in your area, or you find one you are interested in, take a trip, find a good operation location, and ask for permission from the staff head. Then take your portable gear to the castle and enjoy the fun of operating at a historical site.