I 'm back on the castle trail again! It has been a long time, but I decided that I could now take a short trip to a nearby castle to operate from. The corona virus situation is still serious the Kansai area, and there are travel restrictions for “non-essential” reasons....but visiting and operating at a castle again is something I considered “essential!” So, I drove the 25 minutes it takes to reach Ikeda castle from my house and talked to the park director about operating Ham radio on the castle grounds. He said that I would need to submit a formal request to the city office, but in principle it should be OK. He gave me the necessary forms and I had a friend fill them out in Japanese and then I sent them by email to the director. A few days later the director called me and said that the city had approved my request, so I was good to operate on Friday, the 23rd of July. So, Ikeda castle is the topic of this month’s JACOTA operation. The city of Ikeda, where Ikeda Castle is located, is also famous among hams for the Kansai Ham Festival.

It was the second day of a 4-day holiday/weekend, and I was somewhat concerned about a lot of people visiting the castle….and also about the heat! The weather was forecast to be hot and humid, and the forecast was correct. I arrived at the parking lot very close to the castle about 8:15am and waited for the castle to open at 9:00am. There are only 6 parking spots at the lot very near the entrance of the castle, but there is another large parking lot just north of the castle, that is just a short walk to the entrance.

Ikeda castle is located in Osaka prefecture, and about a ten-minute walk from Hankyu Ikeda station. Ikeda castle is a small castle, similar to Shoryuji (May issue of FB News.) and is easy to visit in a morning or an afternoon.

The castle was originally a small fortification built by Ikeda Noriyori in 1334. The Ikeda clan ruled the area from this time through to the Sengoku Period. The castle was involved in many battles and struggles for power in the area and gradually grew in size and strength with each one. The castle fell to Oda Nobunaga in 1568. Nobunaga recognized the skills and intelligence of Ikeda Katsumasa, lord of the castle, and made him a retainer. Ikeda rebuilt and strengthened much of the castle, learning from Nobunaga's castle techniques. Araki Murashige took over the castle in a coup in 1570 and expelled Ikeda Katsumasa from the castle. The castle was abandoned in 1580 when Araki moved to Itami Castle. (History courtesy of Jcastle at http://jcastle.info) 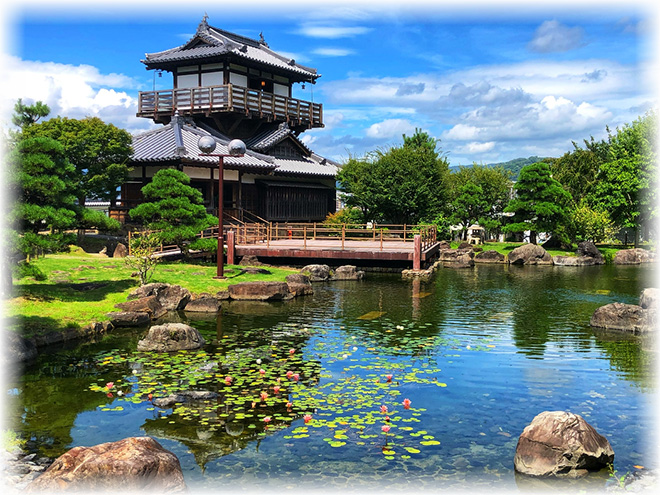 The Tenshu is a reconstruction and is very nicely maintained. You can sit on the platform and view the pond, a very peaceful experience. 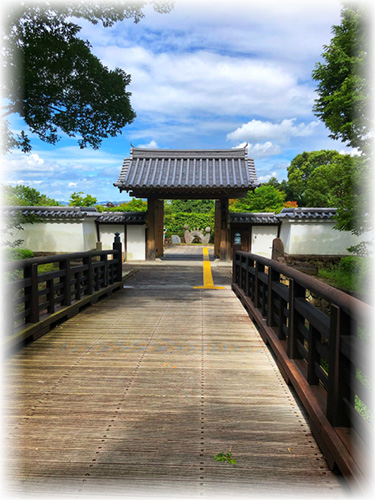 Main gate, Otemon Gate and a wooden bridge to the castle.

To the right after you pass through the gate is an office and rest area. The staff in the office are very nice and helpful. 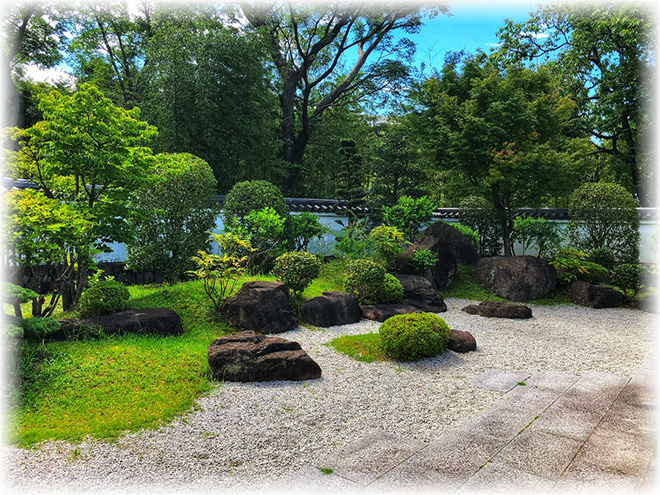 To the left of the gate is a nice garden. 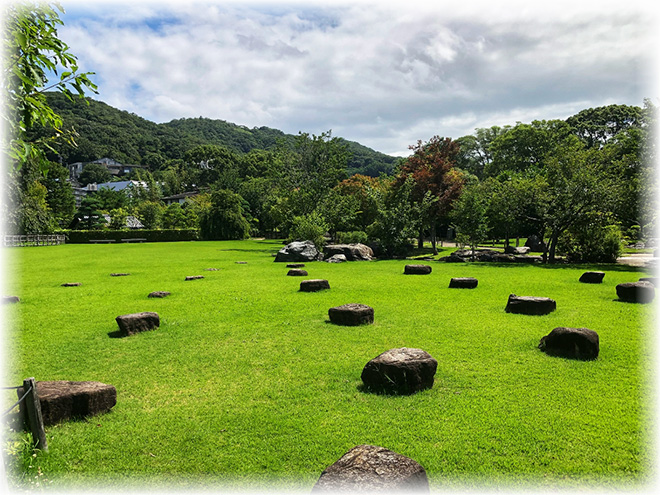 A large open ground with foundation stones. The grass is very green and trim. 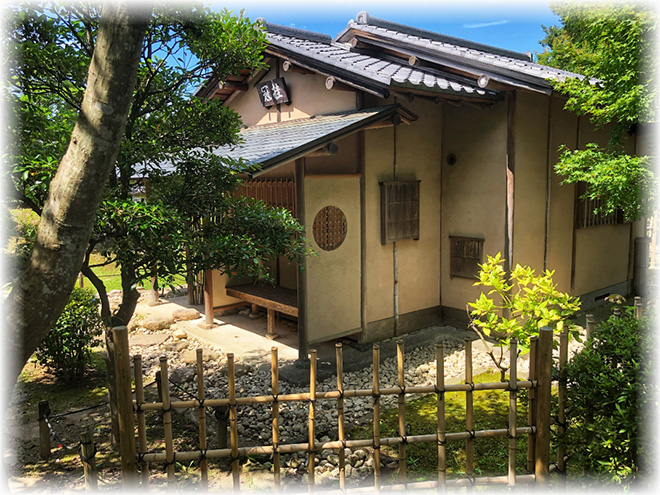 A tea house on the castle grounds.

The vast green lawn of the castle grounds. It would be great to set up a large antenna on the grass and operate here all day…but not in summer! 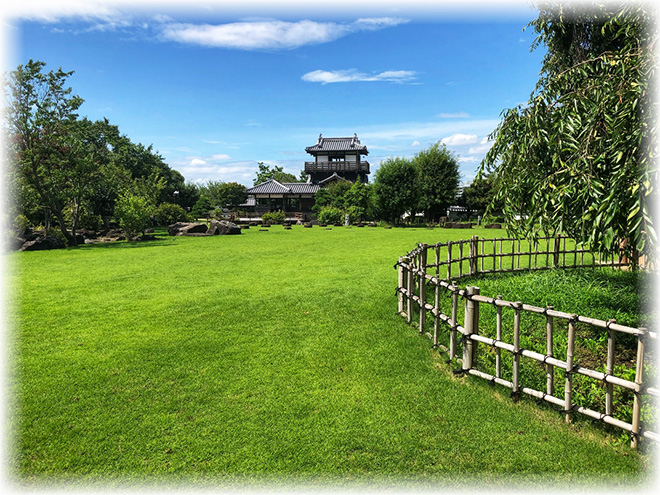 The castle is at the far end of the grounds. 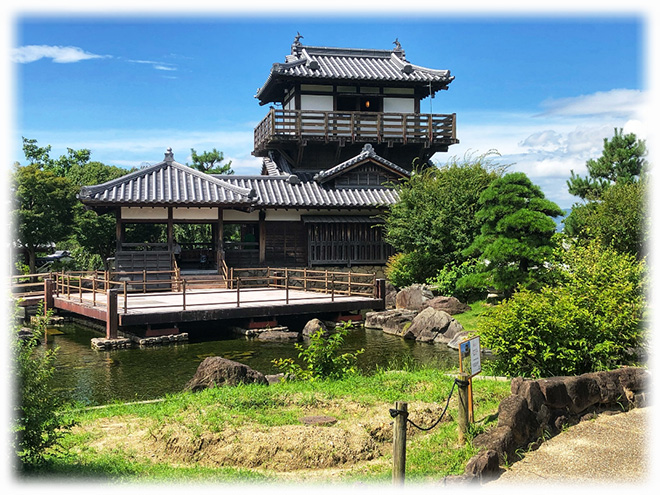 I found this spot next to the Tenshu that looked like a good place to set up my station and operate from. There is some shade from the Tenshu roof, which I thought would be nice, as the forecast was for a hot and humid day. 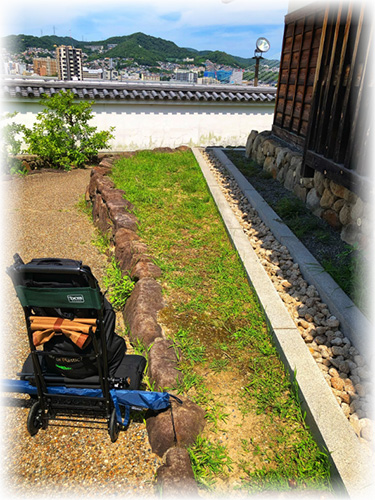 The stone ledge at the base of the Tenshu is where I can set my bags on and sit while operating. I had my IC-705 transceiver in the LC-192 backpack, which held everything I needed, including an antenna.

I decided to use the Icom AL-705 magloop antenna as it is compact, is easy to mount on a tripod and I have finally learned to tune it fairly quickly. I wanted to use the Buddistick Pro® tripod, but I forgot an adaptor I needed to mount the antenna tuning box to the “Versa Hub.” I ended up mounting the antenna to my camera tripod, which had the correct sized base screw.

Constructing a vertical dipole would have been the best antenna to use on 40 meters, but the location was too close to the Tenshu and the walking path, and I had to think about the visitors that would be walking past my station. Setting up on the wide grassy area would have been perfect, but that was not allowed, and there was no shade nearby. In addition, the place I chose had a pretty open view to Osaka and Kobe. 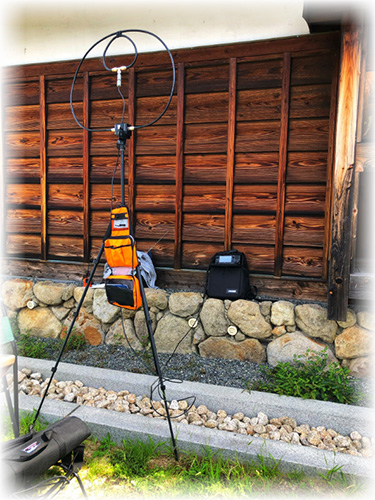 Antenna setup and ready to go.

I hung the Go Pouch on the tripod for some additional weight (batteries, adaptors, tablet) and to show my call sign tag in the top pocket. Several visitors seem to understand what I was doing, and paused to watch.

Later in the morning I switched to HF. I found a clear frequency in the SSB portion of the 40 meter band and called CQ, but got no reply. I thought my signal was too weak or the antenna was just not tuned right. I called a friend in southeast Osaka, and he said he couldn’t hear me at all….the signal seemed to skip over Osaka. So I went hunting for other stations calling CQ and managed to work stations in Mie and southwestern Hyogo prefectures. RSTs ranged from 43 to 57. 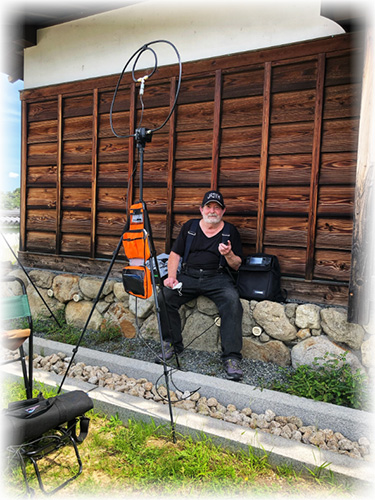 Taking a break in the shade of the Tenshu (castle keep).

The day was getting hotter and more humid, so I packed up the station, gave my thanks to the nice castle staff and told them I would send them a link to the August FB News site. By the time I got back to my car I was sweating, but it had been a great day and a lot of fun. I hope other hams will operate from Ikeda or another castle that they find. JACOTA operation is a lot of fun and learning more about the castles is very interesting.

Last December I visited Izushi castle in Hyogo prefiecture. It had snowed the day before, and the road and castle grounds were white and wet. And, it was cold! I only took pictures that day, and talked to the man in charge of the parking lot, right in front of the castle, about operating there. Izushi castle could be the next place that I take you to visit and operate from. Until next month, 73. 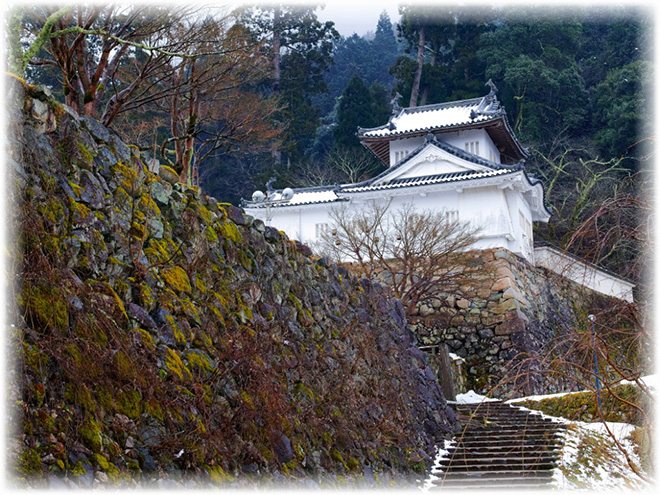