What I think about microwave communications?

When you hear the word "microwave," most people's common sense tells them that it is a radio wave that only travels as far as line-of-sight range. What is your impression of microwaves?

In fact, when amateur stations make good use of microwaves, we are often surprised to see how far the radio waves can travel. In addition, since the microwave band can be used in the wideband mode, it is a band where you can fully enjoy transmitting and receiving TV images and high-speed, large-volume data.

The reason I have been able to enjoy microwave communications for more than 20 years now is because the more I try, the more I experience a series of wonders and new things, and also because I can enjoy them with my own equipment, which is one of the most exciting aspects of amateur radio.

Fascinated by the FHD images

One of the pleasures of SHF band operations is Full-HD Amateur TV (abbreviated as FHD-ATV), which is equivalent to terrestrial digital broadcast quality. 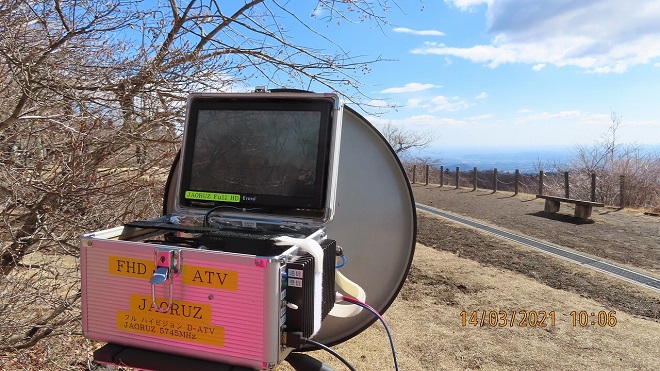 Before I started FHD-ATV, I was operating FM-ATV and DVB-S digital ATV (SD video: 480i), and so on. However, even though 5 to 6 years had passed since the complete digitalization of TV broadcasting, only amateur stations could provide ATV with SD video quality that was several decades old, which made us feel shameful. With the cooperation of my friends, I developed an FHD-ATV (1080i) transmitter/receiver that is equivalent to terrestrial digital broadcasting quality about five years ago, and I have been operating it under a license. 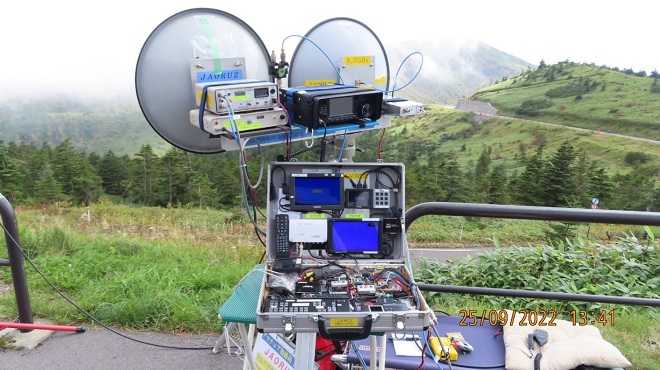 Figure 2. 10 GHz transmitter/receiver (AV, monitor, IF, and so on. are separately incorporated in the trunk)

First, Figure 2 shows how the FHD-ATV transmitter works in its configuration. FHD-AV signals from digital video cameras are captured through HDMI, and the video signals are compressed and encoded into MPEG2 or other formats.

These are converted into TS frame packets and sent to the transverter unit as IF signals with a 64QAM 5.7 MHz bandwidth modulation signal, which are then converted to 5.7 GHz, 10.2 GHz, and 24 GHz, and then transmitted from a parabolic antenna.

Receiving is the opposite: after IF conversion by the transverter and decoding through STB (ISDB-T tuner), the signal is sent through HDMI to a recording device or ultra-high brightness monitor TV for clear viewing, even in direct sunlight.

The IF frequency is mainly the TV CH band, which is no longer used for TV broadcasting due to frequency repackaging. In addition to systems that use this 700 MHz band, some also use the 1265 MHz band for IF in order to allow the use of conventional transverters. Furthermore, there is a double conversion system that converts the 1265 MHz band signals to ones in the 700 MHz band, making use of ideas from amateur stations.

The modulation unit uses commercially available equipment that is also used to transmit information images in hotels. In applying for a license, a block diagram is created after analyzing the inside of the modulator, and the station is operated after receiving a formal license. (Examples of adopted equipment: XHEAD-2 and EMB-220 J)

It seems that nearly 50 stations operating ATV in Japan are now doing FHD-ATV in the ISDB-T format in the 5.7 GHz to 24 GHz bands. 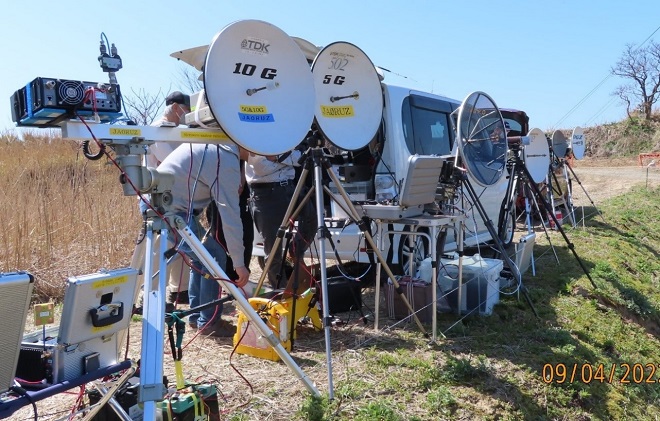 Figure4. FHD-ATV operation meeting in Niigata prefectureSome of the video footage can be viewed on YouTube by typing in FHD-ATV ISDB-T JA0RUZ. 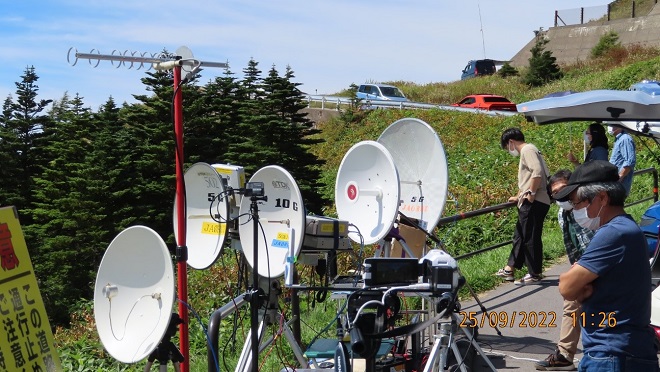 For microwave DX records, see the 5.7 GHz and 10.2 GHz bands on the JARL (Japan Amateur Radio League) website, but there are also FM and other records of nearly 1,000 km.
https://www.jarl.org/Japanese/A_Shiryo/A-8_Kiroku/distance.htm

In FHD-ATV, I have also succeeded in sending and receiving Full-HD video at 5.7 GHz and 10.2 GHz over a distance of 287 km between Mt. Hodatsusan, Ishikawa Prefecture and Uomidai in Tottori Prefecture.

The video footage is shown below.
https://www.youtube.com/watch?v=wu5j8J0sWAM

The current record for DVB-S ATV(SD) is a 463 km contact between Mt. Kanpuzan in Akita Prefecture and Mt. Iouzen in Toyama Prefecture.

The current record for DVB-S ATV (SD) is 463 km between Tokyo and Osaka.

You may think that microwave operation is all about moving to a good location. However, about 20 years ago, in fixed station operations on 5.7 GHz and 10.2 GHz, stations around the Kanto area and more than two dozen stations in Nagano, Niigata, Toyama, and other prefectures exchanges DX QSOs by participating in FM and SSB roll calls, mainly with the center station in Chiba Prefecture.

Roll calls in this area are usually propagation over the mountains, but we sometimes used rain cloud scatter reflections such as "RainScatters" and had the great pleasure many times a year of being able to communicate with five or six stations in the different 1, 9, and 0 areas at the same time. 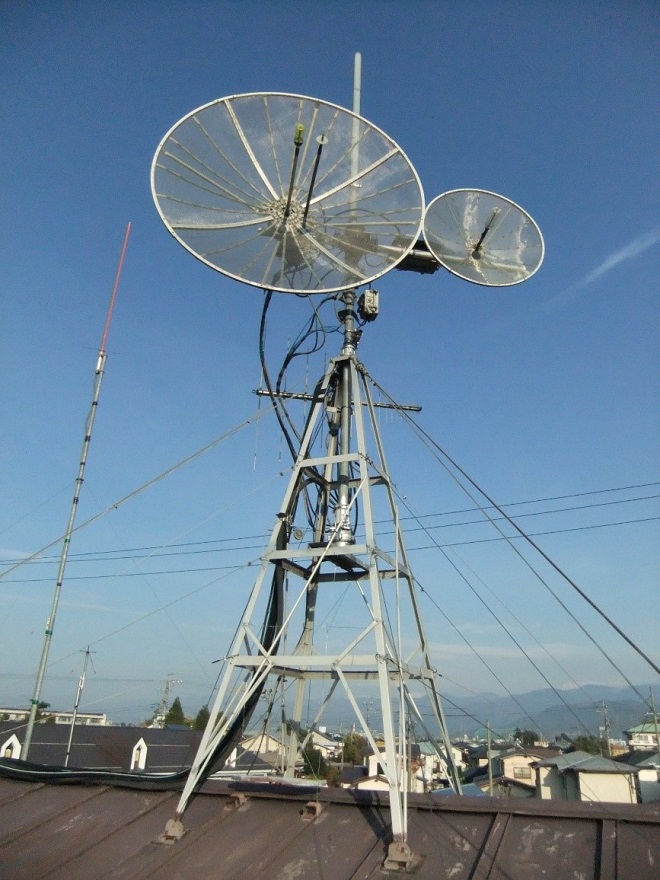 No problem for mobile operations on microwave

Mobile operation at 5.7 GHz and 10.2 GHz has been confirmed to have the same service area as 1.2 GHz band propagation. Rain Scatter can also be used while driving.

However, if you use a conventional type of radio with poor frequency accuracy and stability, it is necessary to understand the following points.

(1) When mobile stations operate together, they may not be able to communicate well with each other because they cannot synchronize their frequencies.

(2) It is necessary to understand that the communication status changes rapidly, and if you do not talk to each other within a few seconds of transmission, you may not be able to hear each other in a fraction of a second.

(3) Due to the short wavelength in the cm class, QSB is extremely fast. 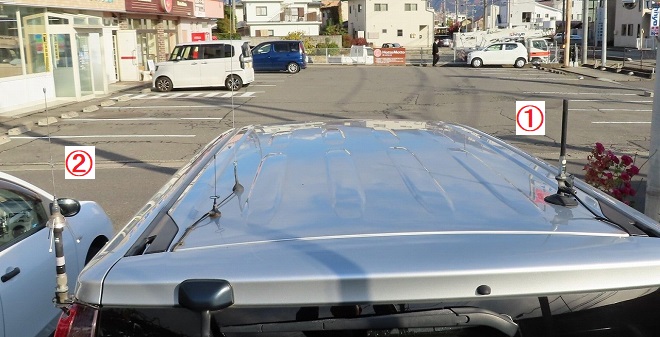 A beacon station on microwave

I have a 5.7 GHz beacon installed at my home and have confirmed that even with a 1 to 2 W of transmitter power plus an omni-directional antenna, I have "always" been able to cover the Kanto Plain and even Murakami-shi in northern Niigata Prefecture.
https://blog.goo.ne.jp/ja0ruz/e/78ba9245ba88aa9221072dadc8a4f573

In addition to the above, I also have constant reception in 9 areas beyond the 3000 m high Northern mountains.
https://www.youtube.com/watch?v=JtZCkpKH_74

Even in Shinshu, which is surrounded by mountains, the 5.7 GHz and 10.2 GHz bands can be used to communicate with people outside the prefecture.

With the release of new radios, many people will be able to QRV in the microwave band, and the fun of amateur radio will be broadened!

Please refer to the Tokyo Microwave Club and the West Niigata Club for information on microwave ham operation in Japan.

I am looking forward to making microwave contact with many more people in the future. 73!

Author's self-introduction
Fumio Sekizaki, JA0RUZ:
I opened my station on 50 MHz about 50 years ago. I have moved up the band in turn, and now operate FM, ATV, etc. in the 1.2 GHz to 47 GHz bands.

In 2008, I started development of "5.7 GHz Full-HD ATV, which is equivalent to terrestrial digital TV quality," and now I am promoting it to microwave fans nationwide while operating the FHD-ATV up to 24 GHz.

I also maintain and manage the JR0WS Hijiriyama Repeater, which has been working for nearly 40 years with local hams to keep the 1.2GHz band as an amateur radio band.