In this short review of the contemporary situation of ham radio in the SHF range in Germany I will focus on the most popular bands with an allocation between 1 and 24 GHz. The frequency bands with an amateur radio allocation in Germany are 1.3, 2.3, 3.4, 5.7, 10.3 and 24 GHz. The maximum peak envelope output power level for a German General class license is 750 watts on 1.3 GHz, whereas on all bands above 1.3 GHz an output power of 75 watts is applicable.

The most popular SHF band in DL nowadays certainly is the 1.3 GHz band from 1240 – 1300 MHz, which is mainly due to the fact that a number of recent commercial transceivers of Japanese origin cover the 1.3 GHz band ex-factory. In former years, this frequency range was mainly reserved to those amateurs who were capable of homebrewing their own transverters with an intermediate frequency (IF) of 28 or 144 MHz. The most popular design in this range was developed by M. Kuhne, DB6NT, published in DUBUS magazine in 2007.

However, ready-made top notch transverters for 1.3 GHz, as well as for all other SHF-bands up to 76 GHz, are available for example from Kuhne Electronics these days. Actually, transverters with 28 MHz IF in conjunction with a HF transceiver are still the preferred set-up of contest stations because of the achievable high IP3 in front ends. This is extremely important in situations with a huge number of stations running high power from exposed sites. In addition, the phase noise of recent commercial VHF/UHF/SHF transceivers, be it analogue or SDR-based, is much inferior to monoband transverter solutions, excluding them from serious contest work, when full legal limit TX power is involved in areas with a dense amateur population.

As already mentioned, ham radio activity on SHF bands literally explodes during contest weekends, but completely dies down outside those periods. If one searches for an SSB/CW QSO-partner throughout the week in evening times, it will be very difficult, unless one starts on 144 or 432 MHz and agrees to migrate to a SHF band to run a propagation test. Random contacts in narrow band modes like CW or SSB, even in times of a troposphere lift, have become pretty rare. That is the reason why these days SHF trials are scheduled via the internet in dedicated chat rooms, like, for example, the very popular ON4KST chat. Talking about 1.3 GHz in densely populated areas like bigger cities, activities concentrate on a considerable number of repeaters, using conventional FM or digital modulation schemes.

In recent times, similar to VHF/UHF, machine generated modes (MGM) like FT8 have become very popular, especially on 1.3 GHz. However, those activities concentrate on a single frequency (1296.174), involving a high potential of mutual interference. Also, for future frequency allocations following WRC 2023, it will be hard to argument against telecom authorities to further claim 60 MHz of bandwidth in the 1.3 GHz range, when (some amateur television excluded) recent MGM activities only occupy a single 2.7 kHz wide channel….

In the SHF range the radio wave propagation normally is characterised by a quasi-optical line of sight path, thus confining reliable communication distances to about 300 km. However, in recent years narrow-band scatter propagation modes have become pretty common to extend the communication range. Namely these are rain scatter (RS) and airplane scatter (ACS). Throughout summertime with its high-up reaching thunderstorm clouds, rain scatter on 3.4, 5.7 ,10 and 24 GHz offers the chance even for random QSO’s, preferably on 10 GHz. The achievable communication distances by reflection and refraction of big rain drops ranges up to 800 km, depending on how high the rain drops, or ice particles/hail are lifted up in a thunderstorm cumulus cloud. Preferred modes are CW/SSB and also FM, as MGM cannot cope with the involved signal spreading and Doppler shifts.

Airplane scatter, however, needs a good timing between two stations involved. The airplane, preferably huge planes with a high radar reflection area, needs to cross the direct beaming line between two stations, the airplane flying the higher the better through a space volume, which both partner stations can ‘see’ with their antenna beams. Those ACS contacts are limited to a few seconds up to 2 minutes, depending on the TX power, plane speed and frequency used at both ends. For this reason, the ACS trials have to be scheduled thoroughly by means of chat rooms, like again the a.m. ON4KST chat. Of course, both stations need to know the exact course of a particular airplane for their reflection window. For this the ADS data of airplanes, available from the internet, are used and processed in dedicated software like, for example, ‘AirScout’ by DL2ALF. The software shows the flight path of a suitable plane through the commonly seen volume and makes precise timing predictions for the expected reflection window. Thus, distances up to several hundreds of kilometers are accessible by this propagation mode. Both RS and ACS are most effectively used with elevation-steerable antennas.

Another reflection mode performed on SHF frequencies is Earth-Moon-Earth (EME) communication, extending the range between QSO partners to more than 16.000 km on the earth’s surface. The most commonly used bands for EME are the 1.3 and 10 GHz bands, with a considerably smaller number of active stations on 2.3 to 5.7 GHz. The needed high TX power of several hundreds of watts on 1.3 GHz today is readily available through homebrewing of solid-state power amplifiers (SSPA), based on recent LDMOS transistor technology. For 3.4, 5.7 and 10 GHz EME still surplus travelling wave tubes (TWT’s) are vastly used to generate TX power up to legal limits. Also, solid state power FETs of GaAs or GaN technology are used by some, but the prices are still very high for those devices. 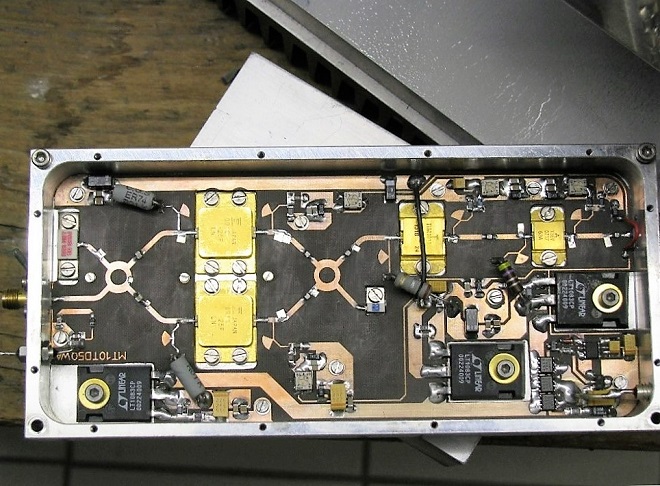 For the needed narrow beamwidth and high antenna gain, parabolic dish antennas in a diameter range from 1 to 10 m are used, whereas the bigger size antennas normally are home-built on site and reserved to only a handful of specialists. 1.3, 2.3, 3.4, 5.7 GHz moon-bounce antennas the most wide-spread feeder system for dishes is the so-called Kumar feedhorn with septum polarizer, as it conveniently can generate the needed circular polarisation. If only small size dishes are available, the use of MGM like JT65 or Q65 have become widespread, however, the thrill of a brain-decoded CW echo off the moon lacks totally in this case, which leads well-known serious German EMEers to continue to do CW or even SSB. 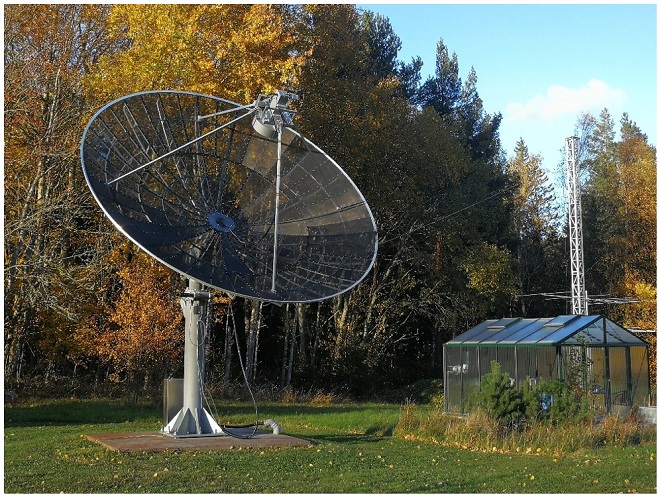 Talking about commonly used antennas in the SHF range for troposphere propagation, up to 2.3 GHz long Yagi antennas, up to 60 elements, are widely used with antenna gains exceeding 22 dBd. Above 2.3 GHz the parabolic dish clearly dominates the scene, be it its prime focus or, because of its handy availability from the consumer TV industry, the offset variety. Prime focus mesh dishes up to 2.5 m in diameter mostly are home-brew, using all kinds of galvanised chicken mesh as reflector on aluminium spokes. 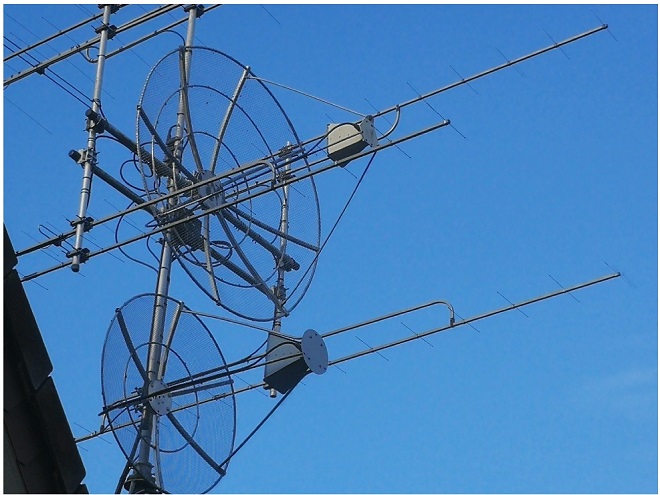 As a broadband primary feed antenna for the dish, usable on all bands between 1.3 and 10 GHz with an acceptable return loss on all bands, the so-called double-ridged feed horn is a viable compromise, although some complexity is involved in manufacturing it on the kitchen table. Less mechanical skills are needed for monoband pyramidal horn antennas.

Easy to build, and therefore widely used by SHF enthusiasts as a dish feed, is the full wavelength loop feed in front of a reflector plate. The advantage of this feeder antenna is its broad and even illumination cone, making it a good choice also for deeper parabolic dishes. In order to support different SHF bands with one primary feed, several band loops are stapled into each other in front of a common reflector plate, keeping the distinct quarter wavelength distance for each single band loop. 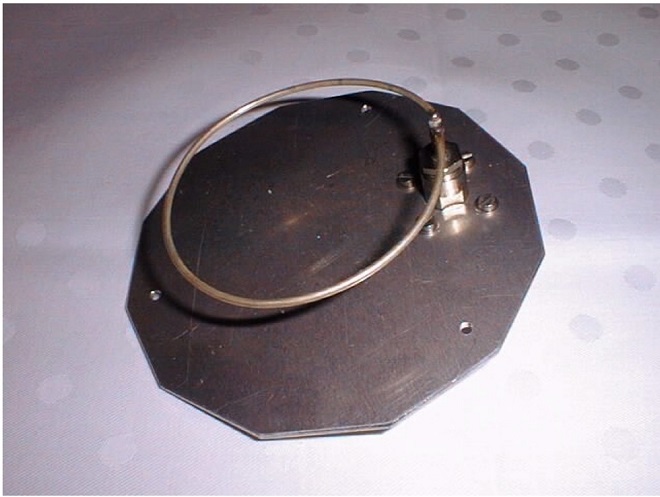 Dish antennas for 10 GHz and up, however, still require some waveguide plumbing, due to the high losses in coaxial cables at such high frequencies. Mostly, simple open waveguide/reflector combinations are used, but also feedhorns with a coax/waveguide transition are often applied. 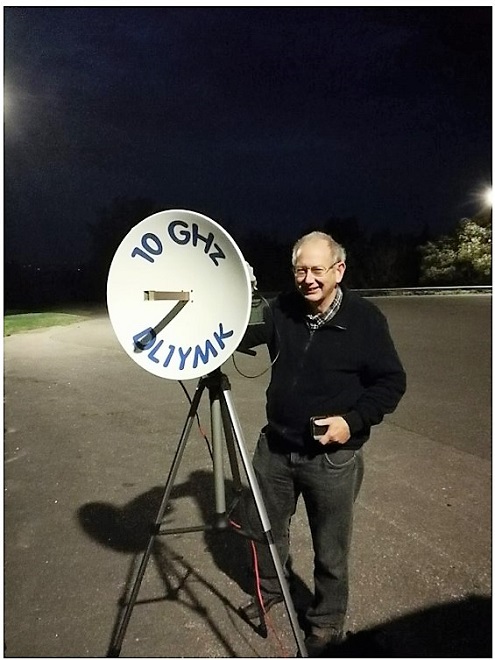 Lastly, a general remark by the author, which is not only true for the SHF scene in Germany, but for all over the world, given the frequency hunger of all kinds of commercial communication services these days: …use it, or lose it! Do not concentrate activities on one single frequency, spread out and use the entire allocated ham radio spectrum! Demonstrate the technical skills and capabilities of SHF amateur radio specialists, still doing a lot of home-constructing….and talk about it!

The WRC 2023 and its outcomes will show the perception of SHF ham radio by telecom authorities. Some European countries have already cancelled ham radio allocations in the 2.3 GHz and 3.4 GHz range with the introduction of 5G cell phone communication, and currently 1.3 GHz is endangered in whole IARU region 1 by satellite-based navigation systems. 08.12.2022/Kh

<Writer self-introduction>
My name is Dr. Michael Kohla, and I am 66 years of age. My first amateur radio license dates back to 1972, when I was only 16 years old. Since then, my prominent interest has continuously been in the VHF to SHF frequency range, communicating mainly in CW and SSB modes. Only in later years I also discovered the HF range for DXing on 'the higher bands'. Today, my main activities are in the earth-moon-earth (EME) CW/SSB communication on the 1.3 – 24 GHz bands. I am a polymer chemist by education and in my professional life I worked in leading positions as a senior chemist in research and development labs.