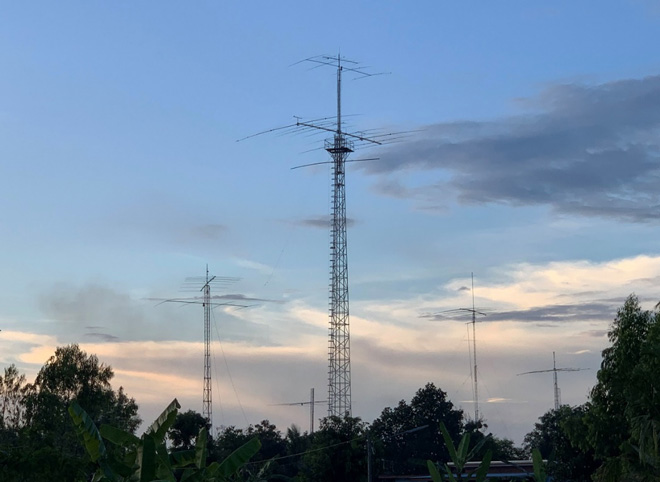 Hosted by CQ Magazine in America, CQ World-Wide DX Contests are one of the largest amateur radio contests in the world. This annual event is split into 2 modes; SSB and CW. The SSB contest takes place on the last weekend of October, and the CW mode follows exactly a month later in November.

This year, as the situation with COVID-19 had started to subside, the author had a discussion with Stig LA7JO/HSØZGD at Friedrichshafen Ham Fair in June about the preparation progress at our contest station in Nakorn Ratchasima province in Thailand for CQWW SSB and CW 2022. With the pandemic, this contest station had been out-of-use for 3 years, and in the midst of it all, was also battered by heavy typhoon and hit by lightnings several times.

Just to give a little background about this contest station, the station belongs to Stig Lindblom in Ban Ta Bong village, Phimai sub-district which is about 400km North East of Bangkok. The first team competition took place in 2013 in the CQWW CW contest under the callsign HSØZAR in the Multi-Two category. The list of operators included Fred K3ZO/HSØZAR, Stig LA7JO/HSØZGD, Ar G4UAV/HSØZDX, Sam SM3DYU/HSØZDY, and Peter NO2R/HSØZKX. Following the contest, it was decided that a contest station is to be built to provide learning opportunities for Thai HAMs and enable them to join in on the competitions. The station was financially supported Fred Laun, K3ZO/HSØZAR, solely for CQWW CW only. 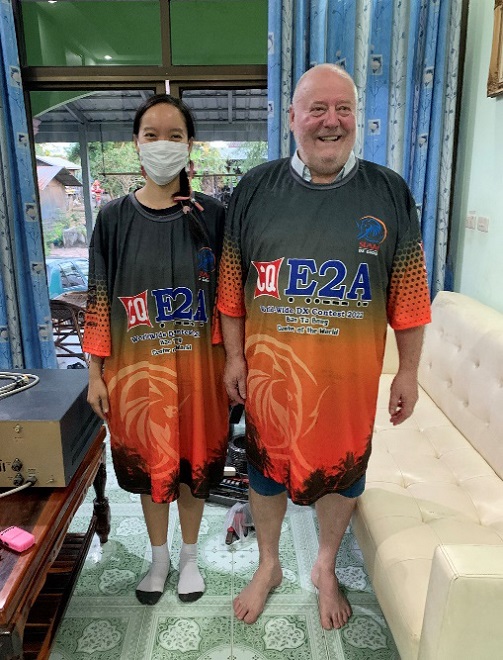 Since then, the author had the chance to join the team from 2014 onwards and had seen many major improvements to the site. Multiple towers, coax cables and new equipment were installed to modernize the station, and since then, Stig LA7JO has received visits from world class contesters who came to join in on the CQWW CW contest every year.

For 2022, the aim of contesting at Ban Ta Bong was slightly different. The primary goal was to give the Thai National AS#6 team, Champ E21EIC (Team Leader) and Mew E29TGW (Team Mate), the ground to sharpen their operating skills in preparation for the World Radiosport Team Championship (WRTC) that is due to take place in Bologna, Italy in July 2023. For this reason, CQWW SSB 2022 was the first ever contest in SSB mode that had ever taken place at HSØZGD. The operators for CQWW SSB 2022 included Dietmar DL3DXX, JC E2ØNKB, Champ E21EIC, Bun E25KAE, Mew E29TGW, Joe HS3PIK, Ray HS4RAY, Bruce KØBJ, Stig LA7JO, Marko N5ZO, Marek SP3LPG, and Ken VE3LA. 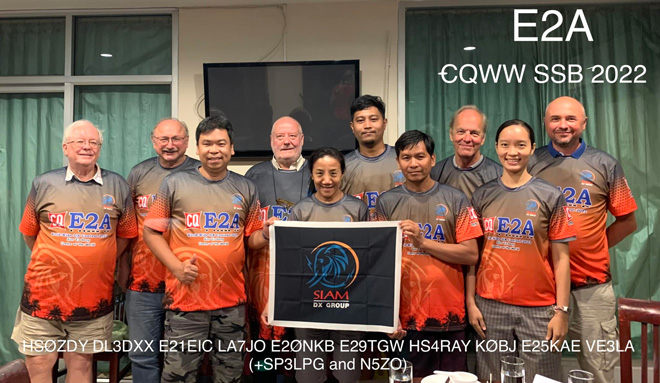 The contest station itself was slightly ill-prepared for the SSB contest as the extent of the typhoon damage was much larger than we had anticipated, and by the time we came to realise this, we only had one week to go. It was not uncommon to see Bruce K0BJ and Ray HS4RAY disappeared up the towers for hours and hours on-end, sometimes well pass sunset.

On Thursday 27th October 2022 evening, we had a pre-contest welcome dinner together where we discussed team strategy, propagation and operating plan. On Friday, there were so much to be done and so little time. Things were getting pretty desperate and we got to the point where we just had to at least have something working – even if it was just on one band. The whole of Friday and well into the night was spent doing much of the repairing work both on the ground and on the towers. And miraculously, despite all the chaos and frustration, everything started to come through under Stig LA7JO’s superior guidance. 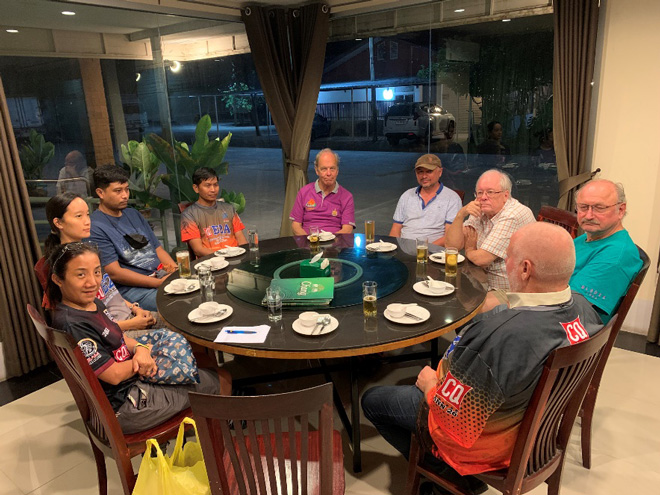 Even though our list of antennas looked extremely promising, unfortunately we were not able to rotate the majority of them as the rotators and all their corresponding controllers were damaged during the freak storm. We had to manually, and strategically, parked them as best we could. The 7-element YU7EF-designed Yagi was fixed to the EU. The 80-40-20m Optibeam at 60mH was fixed to 350° between EU and NA (short path). The only rotatable antenna was the C31XR for 20-15-10m which was on the smaller of the towers at 27mH. The Mosley PRO57 was also semi-fixed on the smallest tower at 20mH and it was purely for the multiplier station. The 40m yagi was not actually active until many hours after the contest had started, but at least it came online just before the band opened on Saturday evening for Thailand.

Despite all these shortcomings, our team shone through and the overall result was more than we had anticipated. E2A set a new record for Thailand at 11.3 million points raw score in under 48 hours. This raw score landed us No.2 in Asia and No.18 Worldwide. The good band conditions definitely played a significant contribution to our score, but a special mention goes to all the fine operators that accompanied us on this journey. Marko N5ZO was actually on another mission of his own and that was to operate from all 40 CQ Zones. After ticking off Thailand in Zone 26 and Australia in Zone 29 afterwards, he only has 5 more Zones to go for this remarkable lifetime achievement. Good luck Marko! 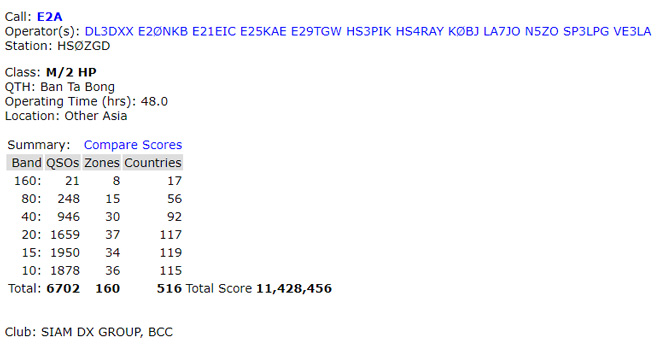 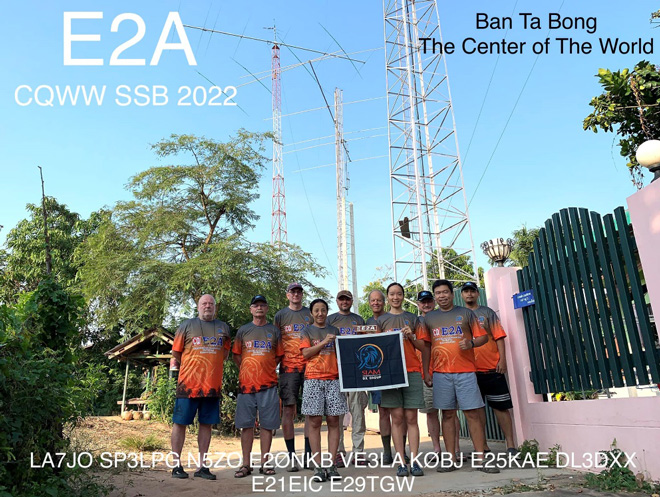 After the CQWW SSB Contest was over, Dietmar DL3DXX and Stig LA7JO stayed on to make further improvement to the station especially to the matrix. During the 4 weeks between SSB and CW contests, Dietmar worked tirelessly day in, day out to get the microHAM antenna switching matrix to come to life and we finally had 3 stations operating within this switching system for the CW contest. A special thanks to Jozef OM7ZZ and E77DX Braco for providing us with tips and guidance regarding the matrix setup. 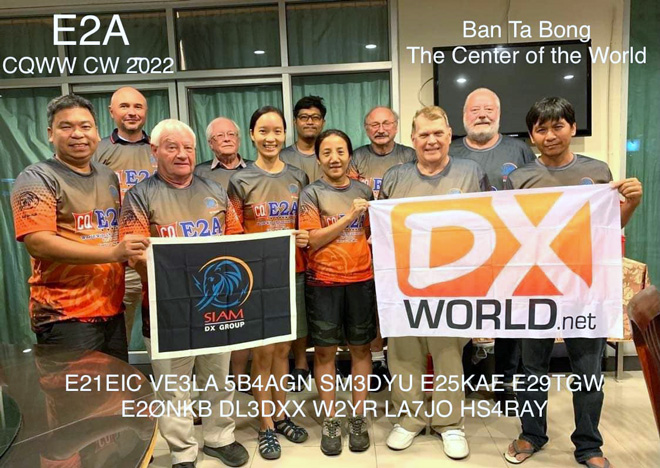 For CQWW CW 2022, our team consisted of Bob 5B4AGN, Dietmar DL3DXX, JC E20NKB, Champ E21EIC, Bun E25KAE, Mew E29TGW, Joe HS3PIK, Ray HS4RAY, Stig LA7JO, Sam SM3DYU, Ken VE3LA, and John W2YR. The ongoing problem with the 80-40-20m Optibeam not willing to turn on the 60mH tower during the SSB contest still remained. Just a few days prior to the start of CW contest, we finally managed to bring down the Prositel 71D rotator from the tower and found out that all the gears inside were completely destroyed. There was simply no way we can source all the spare parts in time for the contest, so we did for CW what we did for SSB, and that was to park it between EU and NA and hoped for the best. On Thursday 24th November 2022, we had our usual pre-contest dinner. On Friday, everybody went about getting the 3 stations set up and we decided to install an additional 1-element 40m delta loop beaming towards JA as an alternative to the non-rotatable 3-element Yagi.

Figure 13. Bun E25KAE in brown shirt and Bob 5B4AGN in blue shirt working on the stubs to reduce inter-station interference.

The switching system worked flawlessly and any inter-station interference that posed a major problem in the past had now been removed through the use of band pass filters (BPF), coax stubs, current mode chokes (CMC), ferrites, and improved bonding and grounding. A quick word of thanks to Bob 5B4AGN for donating additional BPF filters and for working tirelessly through multiple nights to produce more CMC and manufacturing additional stubs for multiple bands. The 40m delta loop that was hoisted part way up the 60mH tower worked surprisingly well and the QSOs took off.

Overall, the final raw score for CW stood at 12.7 million points, just a fraction above SSB. This again set us a new record for Thailand, and rank us at No.1 in Asia and No.15 Worldwide. Definitely a result to be proud of. 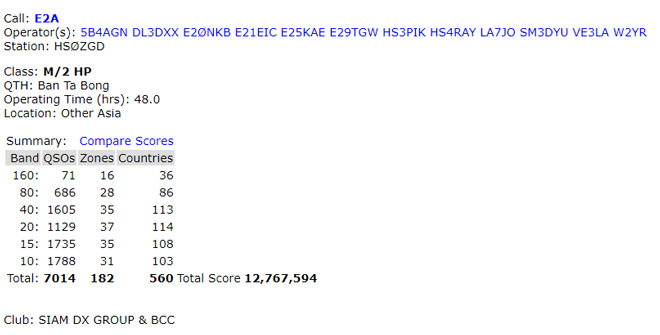 This is the first time in history that a contest score from South East Asia has exceeded 10 million points regardless of which categories, and we have accomplished that for both SSB and CW. A new height has been set for ASEAN which includes 3W, 9M2, 9M6, 9V, DU, HS, V8, XU, XW, XZ, and YB.

Before heading off on our separate ways, Bun E25KAE and Mew E29TGW received the news that they have been invited to join the CW Operators Club (CWops), a prestigious international entity that focuses on keeping CW thriving in Amateur Radio. Congratulations!

Last of all, we would like to thank everybody for their QSOs with E2A and hope to work everyone again in the next contest. Thank you to Stig LA7JO for leading this entire E2A operation at Ban Ta Bong and making sure everything went smoothly. And a final heartfelt appreciation to Uncle Fred, K3ZO/HS0ZAR, for without his help, guidance and support, all this would not be possible. Thank you, Uncle Fred.

Ban Ta Bong, “The Center of the World” – we will be back! 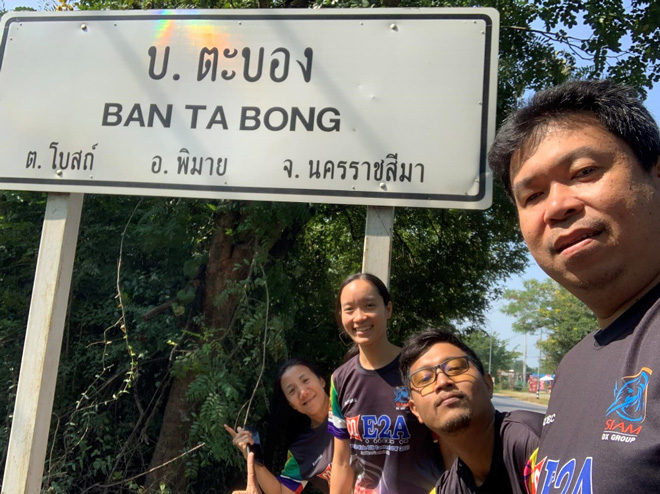